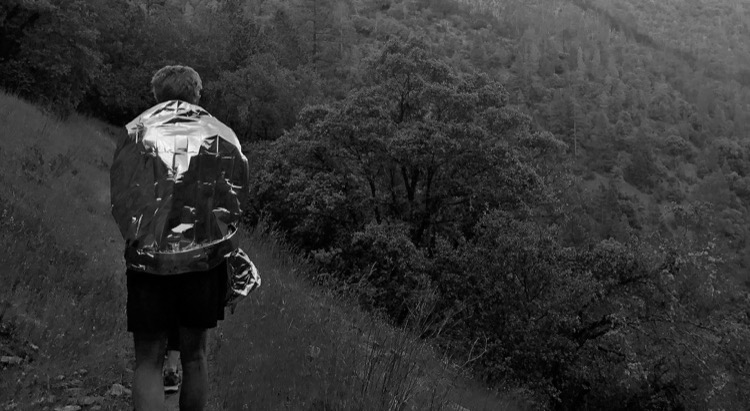 Walking back to Cal 2 wrapped in a space blanket. Photo: Naomi Plasterer

My Second Attempt at The Canyons 100K

This was my second attempt at The Canyons 100K. At least it wasn’t raining this year. But after leaving Cal 2 and reaching the river with what I thought might be food-poisoning-like nausea, something loud came barreling down the mountain through the understory – headed my direction.

A large brown bear landed squarely on the trail not 10 feet in front of me and gave me a good looking-over.

Fortunately, California bears are mellow – not like the grizzly bear in Alaska who still carries a grudge about the extinction of its cousin (ursus arctos californicus). I actually said “hello” out loud. Correctly reasoning that I was friendly, the bear executed what looked like a perfect pirouette and charged off in the other direction. I once heard it said that bears are not good downhill runners. I am now in a position to refute this assumption.

But .25 mile later, I was on the ground for a different reason. The nausea was not improving and I had abdominal pain. So I sat down. Then the rapid and shallow breathing that precedes a good technicolor yawn started. So I lay face down. That’s when other runners started coming by.

And this is what I find most endearing and comforting about the ultra running community: everyone stopped and asked what had happened. Was I alright? Did I need water, s-caps, anything? Did I want them to stay and help in any way? Runners were willing to give up their goals of finishing before the cutoff to assist me, which is why this is such a noble sport.

“I’ll be fine. Thank you. Just nauseous. If you could mention that I might need help at the aid station. Don’t let me hold you up…I need to rest for a while before I get moving.” Since brevity is the soul of wit, I condensed things a bit to “nauseous, resting, will get going, thanks!”

It was relaxing in a way to lay face down on the trail. The river was making river sounds, there may have been some birds chirping…there were lots of mosquitoes (but again, California mosquitoes are mellow compared with Amazonian mosquitoes). I did, however, notice it was getting cold and dark. This thought had me sitting up debating which direction I should start to walk. Where would help be coming from?

Do I head uphill for 2.5 miles in the dark, or west along 5.5 miles of nice rolling trail? Well, I knew what the answer had to be. It was just hard to convince the body that help would come from Cal 2 (uphill) rather than Rucky Chucky.

Within five minutes of moving, Lesley Dellamonica and Naomi Plasterer came barreling down the hill charging in a way that would have made that bear nod gently in reverent praise. Afterwards, they said my face was white as a ghost, which is a hard look to pull off with a sunburn. But they placed me between them, and we slowly made our way uphill, occasionally trying to get me to drink some flat soda, and occasionally, me pausing to sit on the trail for a moment.

I could go into minutia about how the rest of the evening went, but I’ll just end by expressing my immense gratitude to everyone who assisted me along the way. There was never any doubt that I would get back up that hill. And that was mainly due to the optimism and encouragement of my companions, Lesley and Naomi. They kept me moving. There was also Bill Hunter at Cal 2 who checked that I would be fine and eventually drove me and another bedraggled runner back to Foresthill. There was Carrol Lindsay, the nurse at Foresthill, who let me rest on a cot with a warm blanket and tried to feed me various edible tidbits – all the while saying I was looking better as time passed. There was the volunteer who retrieved dry clothes from my car. And finally, there was the Race Director, Chaz, who showed compassion at Foresthill and put on one hell of an awesome event. All these precious pieces of the chain pulled me up from the river and the darkness, all these awesome people, these awesome runners…these are the kind of people who get things done! Thank you for making the world a better place…

Will there be a third attempt next year? It’s too soon to tell…

Great story; I think there should definitely be a 3rd attempt! You’ve gotten so close!!
Great mention of some of my favorite aid station volunteers too – Naomi, Lesley, Bill and Carol volunteer so much of their own time to helping others at races – not just at Canyons but at many throughout the year. We are so lucky to have them in our community!!

I agree…the volunteers are fantastic!

In what other sport will you find a tale of sickness and woe, bears, mosquitos, lying prone in the darkness, and the kindness of others all making for a great race report?

For what it’s worth, I returned for try #3 to a certain 100-miler last summer (after swearing I’d never even go back to the godforsaken state again!) and have a buckle and a lasting smile to show for it 🙂

Congratulations on the buckle! I am looking forward to my third attempt.

I wondered what happened to you Richard. We ran to Cal1 together and you seemed pretty good when we left. And to think if I had hung with you I could have seen a bear!

But you showed a lot of heart even to be out there. After sharing with me your return to running, you have my respect. I’m glad you were well taken care of and that you took the time to share your journey. Very well done! I hope to see you back there for a third attempt and wish you well.

Thanks David. I’ll be there.