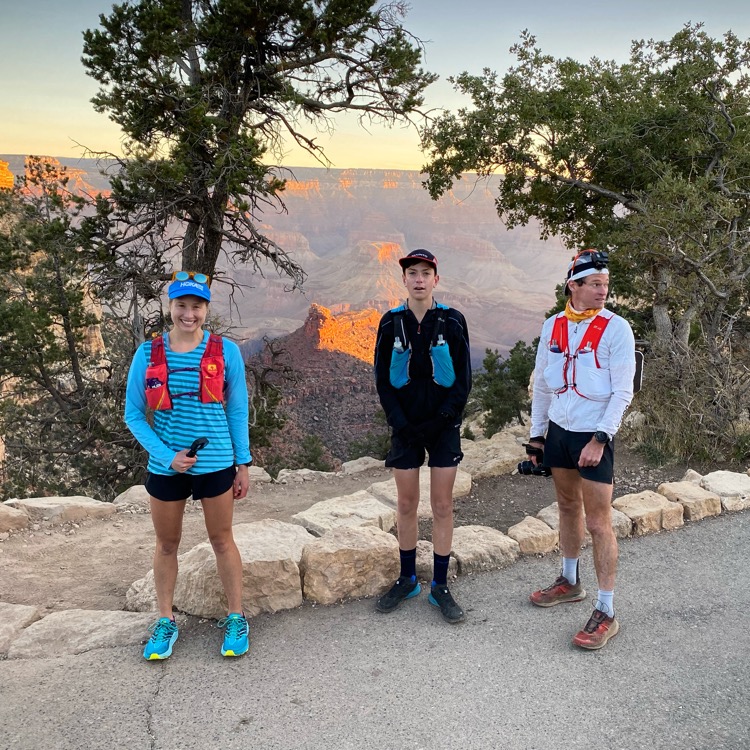 Like many of you, I have had to create my own trail running adventures with many races canceled and trails closed. The thing is, I’m only 14, so I can’t just hop in my car and head out. Anywhere, except for in the ultrarunning world, it might seem crazy or impossible for a kid to attempt to run 24 miles across the Grand Canyon. I’ve been very lucky that I have had some amazing adventures and made great friends in my seven years of trail running, but this adventure tops them all.

My parents know that I have the physical and mental ability and experience to take on this challenge. People that know me know the distance is no stranger to me, but running alone through the Grand Canyon was never an option. I could only make this adventure happen if I found an adult to run with. I knew my first choice, and thought it would be a long shot at best. It turns out that a call to my friend Max King was the only call I needed to make. Max was available and super stoked to come along. I have gotten to know Max over the past few years, mostly at his trail running camps, and as much as he is one of the all-time greats of our sport, he is an even nicer person. He is the perfect example of an athlete who gives to the sport much more than he takes. I hope I can do that, too. We wanted to try and document our run, and a friend suggested we call Jessica Brazeau in Flagstaff, who might have some ideas. She had a great idea – she would come along, as well.

My parents took care of the planning and details, packed the car for the road trip from Santa Barbara to Flagstaff, and before we knew it we were picking Max up at the airport, checking into our Airbnb, and then off to dinner with Jess and her boyfriend, Jim Walmsley. I’m not going to lie, I was almost as excited to go to Pizzicletta for the first time as I was to run Rim to Rim. 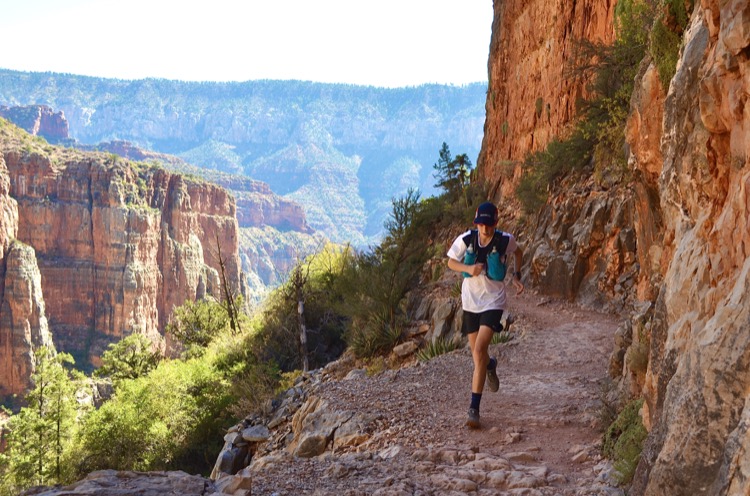 Sebastian running in the Canyon. 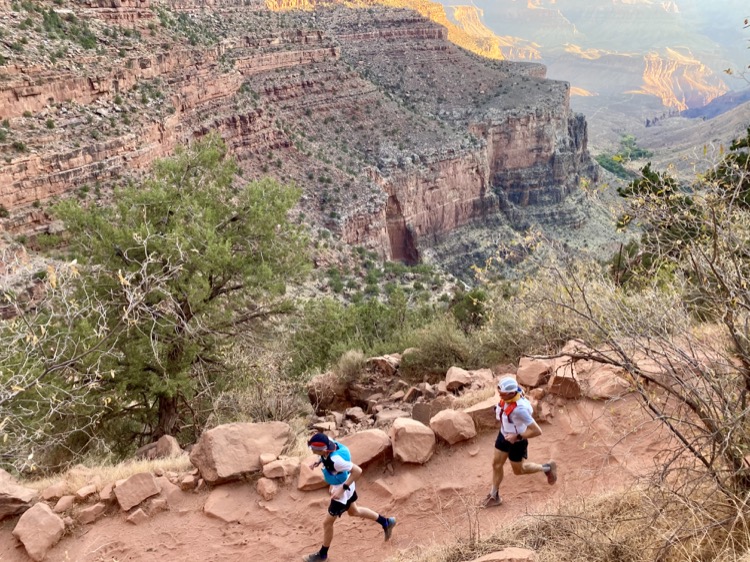 Max and Sebastian running in the Canyon. Photo: Jessica Brazeau

On the morning of the run, my dad woke me up at 4 a.m. and I had my usual breakfast of ciabatta toast and fresh raspberries. We met Jim and Jess at a local coffee shop to caravan up to the Canyon and Jim yelled out the window, “Don’t worry, there’s only one turn.”

We arrived at the Bright Angel Trailhead parking lot and for the first time, I saw the Grand Canyon. It’s like a huge majestic painting and jaw-droppingly beautiful. Jim informed us we needed to get going to avoid the 7 a.m. mule train departures, so at 6:50 a.m. it was “go” time.

We headed downward, yelled goodbye to Jim and my parents, and disappeared down into the Canyon.

The miles down Bright Angel were full of chatting and conversation. We knew Max was nursing a calf injury, but I was happy when he said it was feeling good. Max’s only previous time here was years ago when he did a double crossing with Dakota Jones. Jess had been here many times living in Flagstaff, and is planning to do a rim to rim to rim (R2R2R) soon.

As for me, every step and switchback included indescribable views. All I can say, is that it’s something everyone should see in their lifetime. 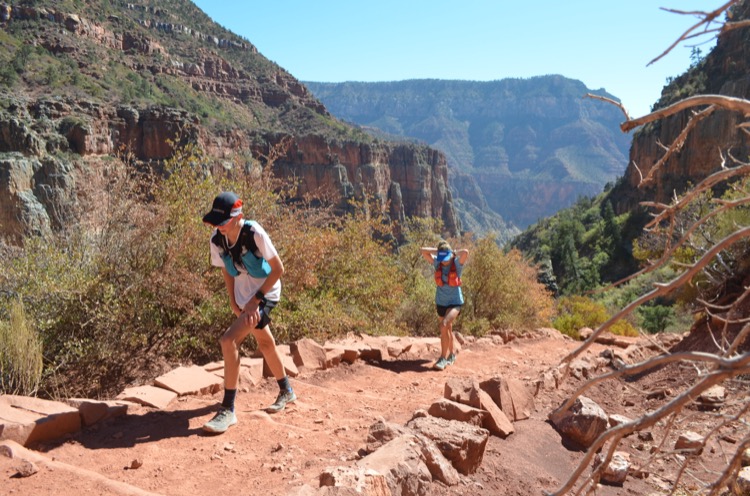 Sebastian and Jessica hiking up to the rim. Photo: Max King 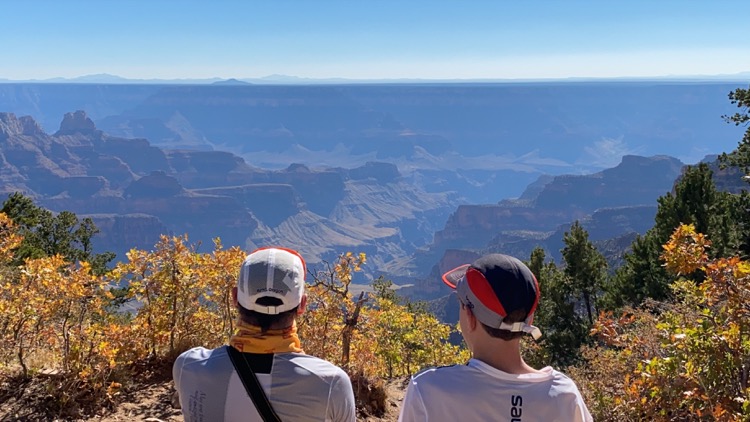 Just as we caught our first glimpse of the Colorado River, I turned to look back and saw a flash of blue and white coming around a corner – it was Jim, who had started a half hour after us and he was, well, running like Jim does—fast. Jim yelled out, “To the silver bridge!” and Jess immediately shouted, “Don’t let him catch you, Seb!”

If this sounds hard to believe, I understand. I still can’t quite believe it. Here I am, running down the Grand Canyon with Max King whom I admire and look up to, and Jess Brazeau who I just met over pizza and is taking a whole day to be with us who is also a great runner. We are laughing and joking, and suddenly I’m doing probably a 6:15 min/mi pace with Jim Walmsley right on my tail, and Max in hot pursuit while filming all of it, so I will always have proof it wasn’t just a dream. This was real life, not a YouTube movie. Jim and I ran across the silver bridge over the Colorado River together, and then he swooped around me, said goodbye, and headed back the same direction across the bridge up South Kaibab and continued on.

After all this excitement, we arrived at Phantom Ranch, kicked back and relaxed with cold Arnold Palmers. As fun and carefree as the 9-mile run down Bright Angel was, the realization that we still had 14 miles uphill with mostly natural water sources, except for no water over the last 6 miles, was really humbling. The first 7 miles up North Kaibab were runnable and easy, and then we entered an area called Box Canyon. It really felt enclosed and huge, with only one way out: up. 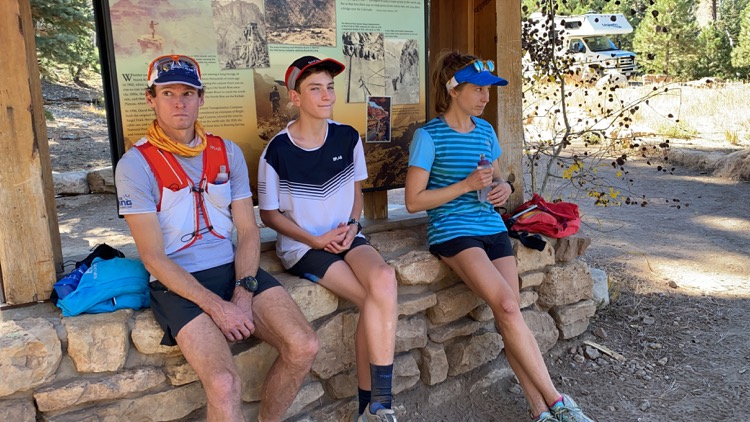 Max, Sebastian and Jess at the finish. Photo: Mike Salsbury

We all laughed and joked, while Max told the story of how he discovered the hard way, over his entire body, what poison ivy looked and felt like. Jess told us she called snakes “danger noodles” minutes before we (Max hates snakes) almost stepped on a bull snake. Six miles from the top, we made one last water stop at Manzanita. Max helped me when the non-stop uphill got tough by alternating a 30 second run with a 30 second hike, and it really helped. The last three miles, I mostly listened to Max and Jess talk about all of their amazing running adventures, and I learned a lot more about both of them. We stopped to say hi to Jared Hazen and Tim Frericks who were on their way down to do a double crossing. Finally, Jess yelled, “There it is!” We looked up and saw blue sky on the horizon: the top of the rim! And the next second, about a mile from the top, my mom was there cheering us on. The last mile was tough and also rewarding, as we dodged mule trains and dust. It was like I had heard, the Canyon will always show you who is boss. Max and I did a celebratory Nesquik cheers, and we were done. Plenty of laughs and reminiscing on the three-hour drive back to Flagstaff while scheming the next adventure. 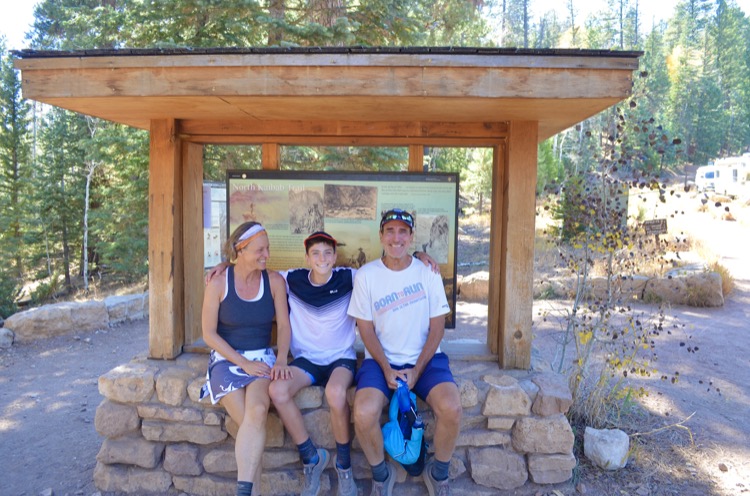 Sebastian with his parents at the finish. Photo: Max King

Thanks Patrick! See you soon!

What an amazing adventure, and congrats! Thank you for sharing your experience. Best wishes.

What a cool experience, thanks for sharing, Something you’ll never forget. I am hoping to get there in the near future.

What an amazing experience.

Thanks for regrooving one of the most beautiful & tough trail runs in the world.

Thank you very much Charlie for everything!