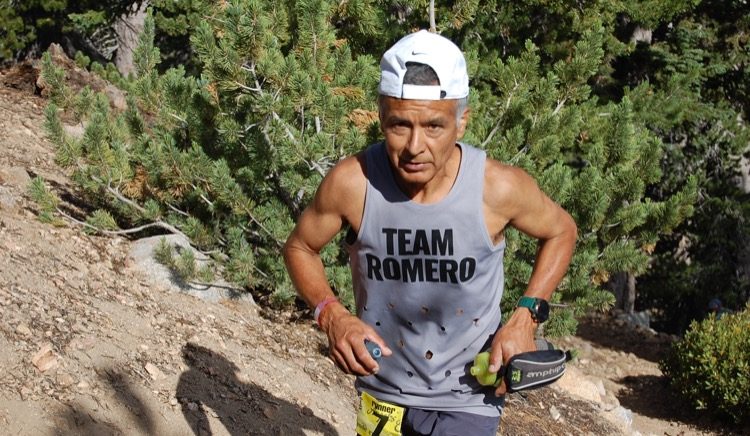 The first time I ever spoke to Ruperto Romero was on the course of the Angeles Crest 100 (AC100) in 2016. It was my very first 100-mile race and I had blown out my quads at mile 60 after leading from miles 27-50. He took some time as he passed me to stop and offer words of encouragement. I would later learn that no matter how his own race is going Ruperto always stops to encourage struggling runners.

Ruperto’s background couldn’t have been more different from my own, both in running and in life. I grew up in upstate New York where I was able to run competitively from age seven through college. Ruperto grew up in a small town in Zacatecas, Mexico. He lived on a farm where he worked long hours from an early age and wasn’t able to participate in sports as a child. He started running a little bit in his 30s and after a long hiatus, took up ultrarunning in his 40s. But ultimately, despite our different backgrounds, we bonded over shared experiences. We conquered the same mountains together and pushed each other in interval workouts on the track. We socialized and goofed off with our friends during easy runs. We drove together to the AC100 course where we both love to train.

Although few people would question his talent as a runner, in part because he didn’t arrive on the ultra scene until middle age, he never received any lucrative sponsorship deals. He has to pay all his own running expenses out of pocket. But that doesn’t stop him from buying shoes or covering entry fees for other runners in need. Having not had an easy path to competitive running himself, he’s always looking to support other members of the running community in any way he can. Every time over the past three years that I’ve gone through something difficult in my life, Ruperto has been there for me.

As I got to know Ruperto better, I also came to see how he handled setbacks in his own life. Two years ago, he was going through a difficult time and commented to me how much the stress began to affect his sleep and training. A lot of people in Ruperto’s position would have just thrown in the towel and withdrawn from the race, but it just made him more determined to accomplish his goals. A couple weeks after we’d had that conversation, Ruperto won the Kodak 100 by nearly an hour at 53 years old. A few days later, he was back to training again, clicking away 6:30 miles with ease, ready to gear up for his next race.

The following year, he returned to Kodiak hoping to defend his title. About two thirds of the way into the race he was only a couple minutes back of the lead when he and the other two runners all went off course and were later disqualified. It was a very frustrating experience for him, but he’s not one to wallow in self-pity. Once again, he returned to his training with a renewed determination and a few months later he won the Avalon 50 miler, earning him an automatic spot back in the AC100. I’ve often wondered if Ruperto’s resilience is a big part of his ability to continue running at such a high level. While most people seem to slow down as they get older, Ruperto, who earned his first 100-mile win at the age of 50, continues to rack up even more impressive accomplishments.

I knew that Ruperto’s return to AC this year would hold a special significance for him. He was one of a few people to have finished the race 10 consecutive times, from 2006-2016 (the race was canceled in 2009 because of fires). He won in 2014 and finished on the podium several other times. After completing 10 finishes, Ruperto initially intended to move on to other races. However, when AC100’s beloved co-director, Hal Winton, passed away two years ago, Ruperto became determined to run one more in his honor. This opportunity crystallized when he won Avalon and picked up the automatic entry. I was grateful for the opportunity to be able to pace Ruperto at AC100. It seemed fitting to be pacing him at the race where we first met and where both of us began our 100-mile journeys. And I, too, wanted to honor Hal.

My pacing duties began at mile 44. When I picked up Ruperto, he was in ninth place and had dropped back a couple of spots after suffering from stomach problems. We left the aid station slowly to allow his body to recuperate but it didn’t take long before I saw him get back into a groove. Despite his earlier issues, he was moving remarkably well, particularly on the technical downhill sections. By the time we had reached the next aid station, he had moved back into seventh. Another technical section saw him take a nasty spill and his stomach issues also returned. Nevertheless, he managed to move up two more spots into fifth by mile 59.

As the sun went down, his stomach was feeling better and he looked stronger. Ruperto was still walking most of the climbs in an effort to be conservative but on the downhill sections it was clear that he still had a lot of spring in his step. After moving into fourth he noted that he was now in position to win his age group. “Age group? You can win the whole race,” I told him. While I’ve always admired his humility, now was no time for modest expectations. I’ve been running ultras long enough to know that it was highly unusual for someone to be moving so quick and with such agility so late in a 100-miler. Someone who looks that fresh is dangerous to everyone within striking distance.

At mile 74, I handed him off to our friend Alex who would be pacing him the rest of the way. I gave Alex a quick recap and made sure he was aware of Ruperto’s potential. Alex had a no-nonsense attitude about pacing and I knew Ruperto was in good hands. When Ruperto took off he was 26 minutes back of the leader, having gained 14 minutes on him since the previous aid station. He was only a minute behind third place. Many people commented on how good he looked and said he had the potential to finish second. But when I told them he could win no one seemed convinced.

By following the race’s live tracking feed, I saw that Ruperto had moved into the lead by three minutes. Another update showed he’d expanded it to 15. His son Rudy and I went and stood a quarter mile from the finish, waiting for him to come in. When Rudy shouted that Ruperto was coming, no one else seemed to notice. I started making whooping noises to break the silence and saw Ruperto turn the corner. Rudy draped a Mexican flag over his shoulders and I sprinted alongside them while the crowd erupted in cheers as we entered the park for the final stretch. 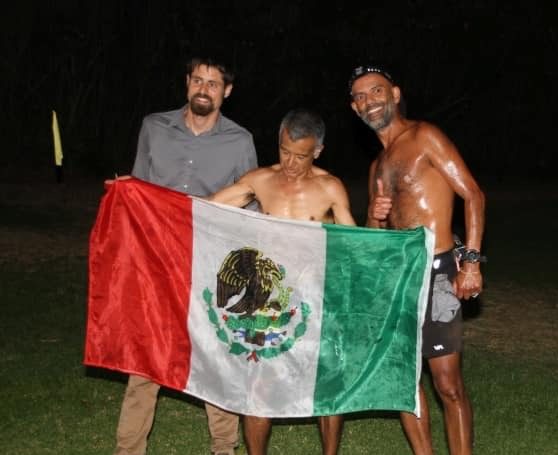 As I saw Ruperto cross the finish line I was overcome with emotion. He had won the AC100 again, this time at 55 years old, long past the age ultrarunners are expected to remain competitive. And we would later learn that he won by over an hour. There is something indescribable about seeing someone so deserving achieve a new level of greatness. As I looked at Ruperto, wrapped in the Mexican flag and swarmed by cameras and adoring fans, I smiled to myself. After everything I’d seen him accomplish outside the spotlight, he was finally receiving the recognition he deserved.

A great article!
I remember getting encouragement when he passed me on uphill during Sean O’Brien in 2018 (I’m a back-of-the-pack runner, but I had an earlier start as I was in 100K and he was in 50M). I’ve also seen him volunteering at check-in handing out bibs. Such a humble and hard working person regardless of his “elite” status. He is a legend.
If anyone haven’t had a chance, his appearance on URP is a must-listen.

Don Ruperto Romero, a man to admire for all the great qualities he owns, a man who’s humbleness is admirable! I feel so blessed to had met Don Ruperto as he always shares an amazing amount of energy and humble words to motivate so many of us! Congratulations Don Ruperto for all your accomplishments!

Neat article, Joel. For me, the Angeles Crest 100 Mile Endurance Run is of greater sporting importance than the Super Bowl, World Series, NBA Finals, and Stanley Cup combined. Which should give most people context to how exhilarated I felt seeing Team Romero on the course and at the finish line – tears in my eyes.

Thanks for getting my pic published. That is exactly what I hoped for. It really made my day to see it at the top of this article.

Sports fans, you can see more of my pics of Ruperto, and all of the other AC100 athletes racing at this link: https://photos.app.goo.gl/n85141WiE5MiAJzR6

Ruperto is the “real deal” – he has volunteered to help us mentor high school xc runners in our local community. Love him!