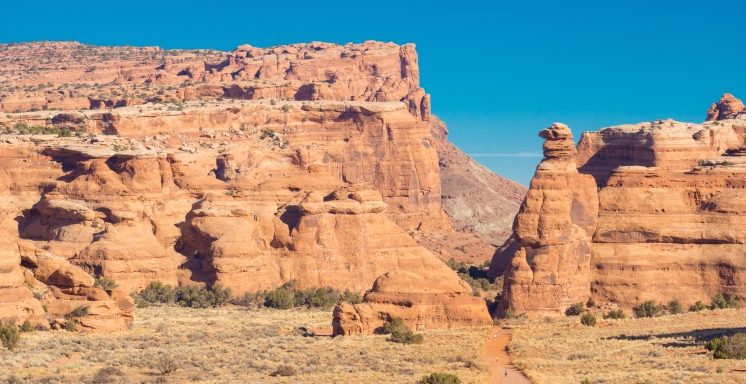 As the sun rose over the Moab Desert, Dead Horse Ultra runners were already well into their race. This gave them the perfect vantage point for a Moab sunrise! Mother Nature had left a light dusting of snow atop the La Sal Mountains in the days leading up to the race, and the stark contrast to the red rock formations of the desert was an extra special treat! From the course, views of Arches National Park, Behind the Rocks Wilderness, and Canyonlands National Park are plentiful.

The weather turned out to be almost perfect, as runners traversed the singletrack trails north of town. Known as a “singletrack revolution” the Magnificent-7 Trail System is new to the area. It is home to 26 miles of moderately-technical trail. First held in October, 2014 with 60 runners in attendance, 450 runners toed the line for this second annual event. The course was a fast one, as many participants were overheard boasting about their 2 hour, 50 mile personal bests. Thoughts of the post-race meal may have been enough of a carrot for runners to move swiftly, since Mad Moose Enchiladas were being served at the finish line.

Putting their finisher’s cowbell to great use, runners hung around the finish line late into the evening, while cheering on fellow competitors. The 50 Mile race was decided early on as the men’s and women’s leaders held the lead for the entire time. Jeason Murphy, of Carbondale, Colorado, won the race in a speedy time of 6:58:52! Melissa Beaury, of Moab, Utah, was the women’s winner in a time of 8:16:16. The 50k also saw some some fast times, as Western State University’s Trail Team member, Gordan Gianniny won in a time of 3:35:48. Rachel Downey, of Boulder, Colorado won the women’s race in 4:11:56.

The end of November is the perfect time to visit Southern Utah, since it is much less traveled then. After this end-of-season event, runners could visit the two national parks and a state park which call Moab home. Many were seen around town in their race shirts and hats!