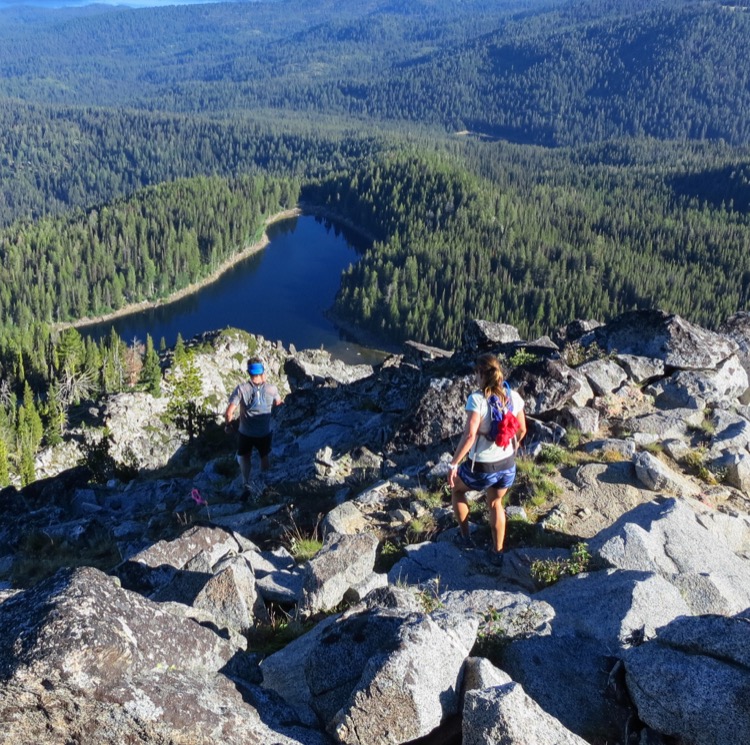 The McCall Trailrunning Classic 40 Mile could be the best race I have ever done. It was tough and it was beautiful.

I came to the US from Australia from mid-June to mid-July to run three ultras: a 50 km race in Oregon called Mary’s Peak followed two weeks later by the 50 km Afton Trail Race in Minnesota, and then two weeks later the McCall Trailrunning Classic in McCall, Idaho.

I live a mile from the beach in Melbourne, Australia, so this high altitude and demanding race gave me many things to worry about beforehand. The three basic worries were: the altitude as the race climbs from 5,500 feet to over 8,000 feet with numerous ascents and descents, the technical terrain as the race is billed as being one of the most technical courses you will ever do and the steepness as I am very poor on steep descents.

In the end I need not have worried about any of these things. I am a serial underestimator of my own ability, with 200 marathons under my belt. As a portent of good things to come I flukily got race number 39 and this was my 39th ultramarathon (that’s in addition to the 200 marathons).

Not only do I live at sea level but Melbourne is flat so I had to change my training for this race. I found myself doing lots of hills in the Dandenong Ranges, hills near Melbourne, where I would run hard up the steepest inclines I could find. Then once I got to the real mountains of Montana and Idaho ten days before the race I did short flat runs most days of only five or six kilometres, plus almost every day I went on a six to ten mile hike with as much climbing as I could find. I think this built up my ability to power hike at altitude and kept my legs turning over while not fatiguing me. During these ten days I also participated in a 10 km race above 10,000 feet on the Beartooth Pass in Wyoming. I was curious how it would feel for a coast dweller to run in such thin air, and if it wasn’t too bad I thought this would be a useful confidence booster. That race was hard but I found the downhills very enjoyable.

The first long climb of the day. Photo: Jeff Black

The McCall course started with some steep uphill mountain biking trails and progressed onto a long and steep ascent of our first mountain, Jughandle. I had started near the back of the field and soon moved backwards down it. Never mind, I told myself, it’s early in the day. That first climb was hard and long and once we had gained significant height we moved onto a trackless climbing traverse through scrub. The views into the valley were amazing, just amazing. I found I was actually passing people on the last part of the climb, I who live at sea level, while everyone in the race that I spoke to lived near McCall or somewhere else at altitude. From the summit of this mountain we embarked on the most technical section of the day, boulders and rocks to clamber over on a steep descent; I had to use both hands as well as my feet and it was painstakingly slow and there was no possibility of taking in the view while moving. But once we were a little way down I stopped and looked back and the steepness of the mountainside was quite something, also we had come down alongside a sheer granite cliff that was pretty much vertical. I’m glad it wasn’t windy.

We came down eventually to an exquisite mountain lake. I had been hiking to mountain lakes all week but this one took first prize so far. It wasn’t big, but it was tucked in the forest and it had a wonderful reflection of the mountain we had just descended (oh, and climbed, I almost forgot that bit).

This set the tone for the day – relentless climbs, meandering descents and beautiful lakes. None of the following descents were as difficult as that initial boulder field and we enjoyed hours of free-flowing single track across this wonderful terrain. There were so many lakes—lakes nearby whose shores we ran along, and distant lakes tempting us with their blueness. Boulder Lake and Boulder Reservoir were not the same thing, to my confusion. Jughandle Lake, Louie Lake, Summit Lake, the list was long. There were startlingly-green meadows studded with trees; at one point I thought I must be looking down at a golf course because the clusters of trees seemed to be perfectly positioned. Sometimes there was no trail, just scrub and a few animal tracks, and much of the terrain was very rocky. Looking up from your feet was often risky when a smooth track would turn to rocks without warning or tree roots would suddenly stick up from the trail.

There were two major climbs to over 8,000 feet, Jughandle and Boulder Mountains, and a third one that didn’t go quite as high (we ran towards this towering Buckhorn Mountain and then were allowed a reprieve and turned at the saddle; I was so glad when I realised this because I had been walking towards the mountain scarcely believing I had the strength to reach the top) and on all of these ascents I managed to keep a good hiking pace.

I ran some of the gradual uphills in the first half of the course, but by half way I was really only running the flats and the downhill parts. I would pass people on the uphills and be passed on the downhills, until magically I managed to get away on the uphills enough not to be passed on the downhills, and for most of the second half I barely saw another runner. Sometimes this alarmed me a bit but there were plenty of hikers on the trails and I was able to ask them if they had seen other runners ahead of me. (One hiker asked me if I were Ann Trason! She’s only the best female ultrarunner there’s ever been so I was flattered, let’s say it made my day.) We must have seemed like lunatics to them, tearing along through this wonderful scenery.

The most spectacularly beautiful lake, Summit Lake, came at the 25 mile mark. It was tiny, the water was dark blue and it was surrounded by a strip of bright green meadow backed by huge mountains. Fir trees, omnipresent in this landscape, dotted the meadow. The sky, as I have neglected to mention, was a deep blue all day. It was definitely the most amazing sight I have ever seen. Remember I am used to running in a flat and arid place where there aren’t any mountains, lakes are few and the trees always appear thirsty.

We passed this lake soon after we had gone through an aid station which cannot be accessed by vehicle so the supplies are brought in on pack goats. That was a first for me. The pack goats had carried in a table, chairs for the volunteers, several casks of water and much else over a 2.5 mile walk. The aid station staff were very proud of their goats and took a photo of each runner standing by a goat; the goats were not very cooperative and preferred looking at the runner rather than the camera, although with the amount of practice they were getting…Really the goats were quite remarkable, taking this strange day all in stride and grazing contentedly.

The mountainsides were full of wildflowers and we passed a few patches of snow. It had snowed during the week – in July, which is acceptable to me in an Australian July as that’s winter but not expected in an Idaho summer – but that snow had not lasted long; the snow we ran past looked permanent. Every so often there was a gushing stream or something more major – I got wet feet a few times and it felt good on this warm day. I didn’t always feel like using the log bridges.

I had worried about the heat but in the end it wasn’t an issue. The day started quite cool, with mist hanging over the first lake we saw, and race day turned out to be the coolest day that week. There was lots of forest in the early stages so I didn’t feel uncomfortably warm for many hours and I managed to drink enough to remain hydrated. By the time the day heated up I felt good and enjoyed the sunshine, and it was a very dry heat so my shirt kept nicely dry. (Two weeks prior I had run an ultra in hot and humid Minnesota where I had been wringing out my shirt every few hours).

Once I had ceased worrying about making the 14 hour cutoff I had been aiming to finish in around 12–13 hours. With five miles to go I was just under ten hours so I decided to try and finish in under 11 hours. The last part had long winding downhills interspersed with a little uphill so I figured I could keep a reasonable pace even if I only ran the downhills. Whenever I started walking (and by now this was happening without any conscious decision) I tried to keep it brief and this strategy worked. The running wasn’t too uncomfortable and the walking felt great. These were sandy biking trails in the forest passing by big boulders and it was eerily quiet. All of a sudden I could see a sign in the distance; I thought to myself that it would probably herald the final mile but it said “Finish 200 yards.” I was so delighted and at the same time shell-shocked. But there I was, finished in 10 hours 38 minutes and seventh female.