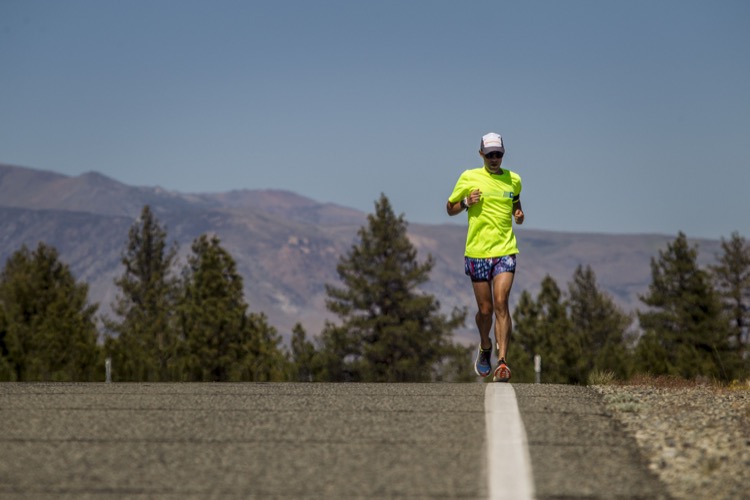 Emerging from the conifers in Nevada after yet another incline, Pete runs on top of the white line. White lines will be his guide for most of the 3100 miles. Photo: Zandy Mangold

Myth or Legend? Is it possible to run across the USA in less than 46 days? That is what I wanted to find out, so I joined Pete Kostelnick and his crew at 8 a.m. on September 12, 2016, at City Hall in San Francisco, California and began my four day photo-odyssey of his transcontinental record attempt. A life-long runner and ultrarunner myself, I thought I had a clue about what a transcon record attempt would be like. I soon found out how little I actually knew.

One cannot rely on Google Maps. The crew is as important as the runner. There might be five hours of downtime – on a good day. Pete can run 135 miles at Badwater in less than 24 hours, but that does not guarantee he can run half that distance day after day. And calories, calories, calories – it seems impossible to consume as many that are burned every day.

The four days I was with Pete and his team were an epic mix of scenery, running prowess and catnaps between the action. As I struggled to wake up and chase Pete with my camera while riding in the crew vehicle, I pondered how much determination it must have taken Pete to rise and run, day after day, while figuring out how to keep moving at a record pace in spite of injuries and fatigue.

Pete will need to keep pace until around October 25 to set a new record – we shall see.

Chuck Dale and Dean Hart, aka “The Chuck And Dean Roadshow,” tend to Pete about every mile. Chuck and Dean are an experienced ultramarathon crew and chored with not only keeping Pete fed and hydrated, but on course as well. Photo: Zandy Mangold

The daily mileage goals and menu are found on the RV fridge. Photo: Zandy Mangold

Pete running through California farm country as he approaches the hills of Yosemite. These were some of the first lightly trafficked roads we experienced after battling thin or nonexistent shoulders, and heavy traffic for most of the first three days. Photo: Zandy Mangold

In Yosemite the mornings tended to be cold, yet somehow Pete managed to get his stiff muscles out the RV door by 6:30 a.m. at the latest. Photo: Zandy Mangold

After a long day and huge climbs, Pete found out that he had a few more miles to go than anticipated. Utterly exhausted and dealing with injuries, he fell to the ground, then collected himself and carried on to the waiting RV. Photo: Zandy Mangold

Pete had just passed by breathtaking Mono Lake in Nevada and the mountains he had crossed in the previous days were now in the background. While he mostly ran on pavement, these few miles took him over dirt track. Photo: Zandy Mangold

Emerging from the conifers in Nevada after yet another incline, Pete runs on top of the white line. White lines will be his guide for most of the 3100 miles. Photo: Zandy Mangold