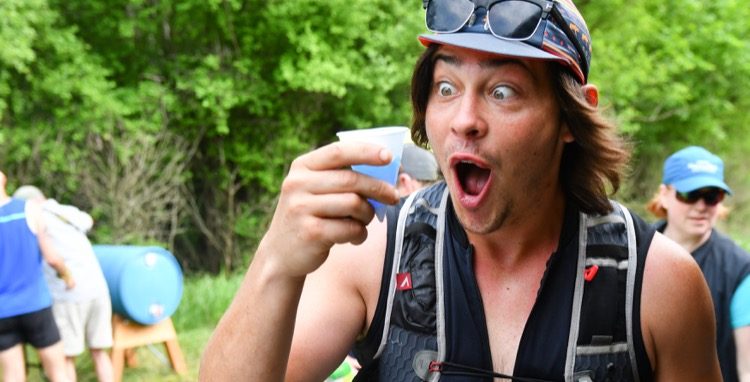 Noon Sunday
This is the moment when the Kettle Moraine 100 trail race officially ends – noon on Sunday. The 100-mile runners have had these past 30 hours to complete their race. We are waiting at the finish line for our final runner. She is nowhere in sight at the moment, but we have confirmation that she is safe and our trail sweep is accompanying her during her final miles. Though she is past due, we believe that all runners who make the cutoffs, sans the finish, should be recognized and therefore will get a buckle.

We’ve already finished the big, free, catered breakfast we provide to all runners and their supporters. The finish line area is now “depopulating” after a strong supportive party atmosphere from about 7:00 a.m. onward, with bleary-eyed runners limping away to their vehicles, many with help from their bleary-eyed support crews. We’ll continue the post-race cleanup while we wait. We’ll leave the finish line banner, electronic timing mat, and pared-down aid station in place until our final runner arrives.

6:00 a.m. Saturday
We have just called out “Ready – Set – Go!” and started the race. Right on time, exactly 240 runners started the 100-mile race (including eight relay teams) and ninety-two 100k runners are now stampeding along the wooded, hilly trail. Their destiny awaits.

Partly cloudy and temperatures on the cool side – the most pleasant running weather we can recall for a Kettle weekend.

We have been co-race directors for this race for 17 years, going back to 2002, and this is our final year. We’ve announced our “retirement.” The runners know, and they’ve been most generous in expressing their appreciation.

But there is no time for maudlin sentimentality right now. We drive off to watch out for problems on the long, sinewy course, and to help service our 13 aid stations. Runners have come to appreciate our great volunteers and we love making them happy. 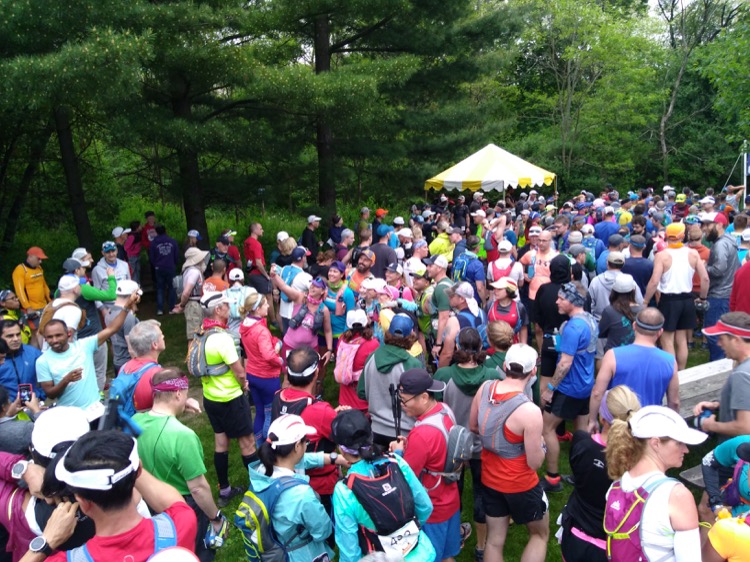 3:15 p.m. Saturday
Our most distant aid station has closed, with subsequent stations closing as the last runners and sweep come through. We still have hours to go until our last daytime aid station closes.

6:00 p.m. Saturday
Since noon we’ve had a lot of activity here at the 100-kilometer aid station. At 1:00 p.m., the 50k runners began their racer, and four of them have already finished. Josh Shapiro won the engraved copper kettle trophy for first place. A little later, Heidi Mane became our first female 50k finisher – a copper kettle trophy for her too.

The 100k racers run the same Kettle course as the 100-mile runners do, except that they stop at the 100k mark, while the 100-miler runners get to keep going. This is especially tough with the sun setting soon and their car in the parking lot right next to the aid station.

Our overall 100k champ is Ondrej Tomek, a Masters-age runner and the only competitor to break 10 hours this year. Lisa Wonneberg is our female 100k champ, finishing in sixth place overall. As is our tradition, we presented Ondrej and Lisa with engraved copper kettles for their first-place finishes.

We’ve had over two dozen 100-mile runners pass through the 100k mark so far. For them, 62 miles down, 38 more to go. Brad Revenis was leading by just three minutes, for first place. Annie Weiss was the first female 100-mile runner to reach 100k and had a margin of about 15 minutes over her closest competitor. The 100-mile runners still have the hardest part of our course ahead of them, with its many rocks, roots and hills, “enhanced” by nighttime darkness. In addition, the latest weather forecast predicts that a thunderstorm could arrive in the next few hours.

The sun will soon be setting. That means that our fourth (and perhaps quirkiest) ultra-distance event has started. It’s our popular non-competitive “fun run.” Starting at whatever twilight time they wish, these runners cover the final 38 miles of our 100-mile course. Their destiny awaits, too. 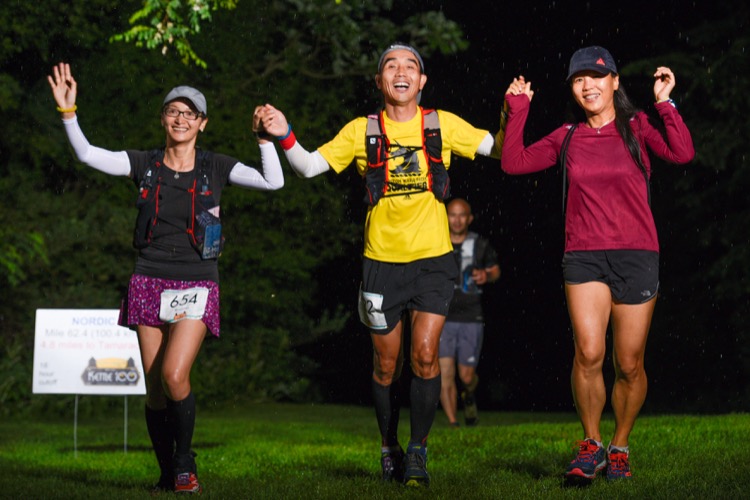 Midnight Sunday
As predicted, a storm passed through the area a little while ago. Few complaints were heard from the runners, as the brief shower was refreshing for most. It was later learned that an isolated, torrential thunderstorm seemed to have targeted our Highway 12 aid station (at miles 77 and 85). Folks at the other aid stations were spared the 45-minute pounding. Runner Lucas Henson decided to take the opportunity for a 20-minute nap among other shelter-seekers, and it wasn’t until captain John Bell started encouraging (kicking out) runners that most got going again.

Brad Revenis is the first and only 100-mile runner to finish so far. He pulled away from his rivals after a back-and-forth dog fight with David Hanson over the first 100k, and eventually won by a substantial margin. We presented Brad with an engraved copper kettle for his trophy. Our second and third place finishers – Nick Kopp and Adam Schwartz-Lowe – were separated by only two minutes at the finish line. The curvy course likely prevented Adam from knowing where Nick was, but he gained almost ten minutes over the last seven and half miles to just about catch him.

We’re still waiting and watching for our female winner of the 100-mile event.

1:00 a.m. Sunday
Stacey Marion is the female winner of our 100-mile race. Stacey also finished in sixth place overall, one of just nine runners to achieve the feat of breaking 20 hours this year. She had a very strategic race and was over 30 minutes back of the leader for much of the day. Night time and true grit allowed Stacey to take over the lead at about mile 81.5 and she never looked back. She also won a kettle trophy. 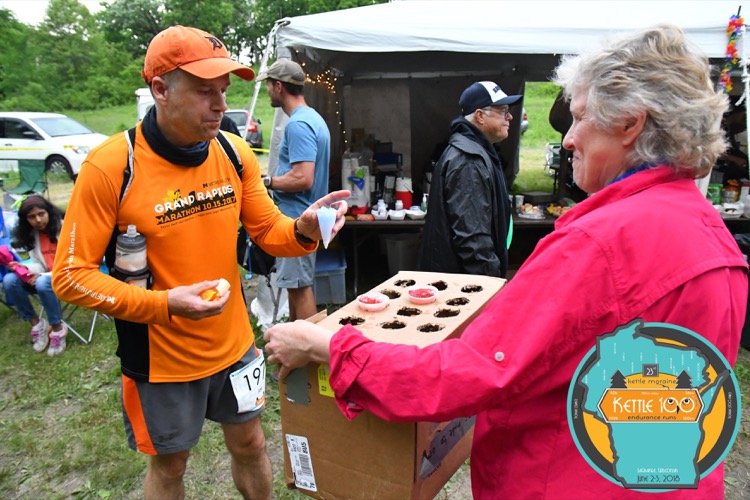 100-mile runner Joe Starr about to enjoy a snow cone

1:02 p.m. Sunday
Bless her heart; our final 100-mile finisher has just crossed the finish line. She is Edna Vazquez Lung. Edna came in a bit over our official published cutoff time. However, she is given well-deserved credit for her accomplishment, as she had made all the previous checkpoints in time, and she was in good health and in good spirits as she continued to move forward. No copper kettle for Edna this year, but she and her crew are very happy nonetheless. It is our special pleasure to present Edna with her finisher buckle, the last Kettle Moraine 100 award we will be giving out, due to our “retirement.”

Overall for us at the Kettle, it has been a great day (and night) (and day) (and 17 years). One hundred and sixty-two 100-mile runners completed their full distance. Eighty-four 100k runners and eighty-three 50k runners finished theirs too. It is our custom to give a finisher buckle and a recorded time to each 100-mile runner who drops out, but runs at least as far as the 100k mark; we had 50 of those runners this year. In our four-person relay race, we happily welcomed all eight teams to the finish line. In addition, fifty-three 38-mile fun run runners successfully covered the course overnight. Between all of our races we had a marvelous finishing rate of 90%, which is a record for the Kettle and a great way to wrap up our 17 years.

We also want to give a shout-out to Parker Rios, a local favorite and a good friend of the race, for completing his tenth Kettle 100-mile solo race. Congratulations to Parker. In the 23 years that the race has been in existence, there have been only three “1,000-milers.”

Now that our final runner has crossed the finish line, we’ll finish cleaning up the race site and transport all the gear and remaining supplies back home. Following that, no doubt, we’ll go to sleep for a good, long while. The post-race outpouring of kind thoughts has been humbling to us. Now that the results are finalized and race reports written, our only two remaining tasks are to hold our volunteer party and to select a new race director so he/she/they can begin getting ready for the 2019 Kettle Moraine 100.

Then we’ll consider ourselves officially retired from directing this race we love so very much. We’ll allow ourselves to slip into maudlin sentimentality. Thanks to the 5,000+ runners who have graced our course since the race was founded. We have hours of stories we could tell. We’re sure going to miss all this.

You guys need to reconsider. The ultra community cannot survive without you. I am starting a petition to force you to continue.