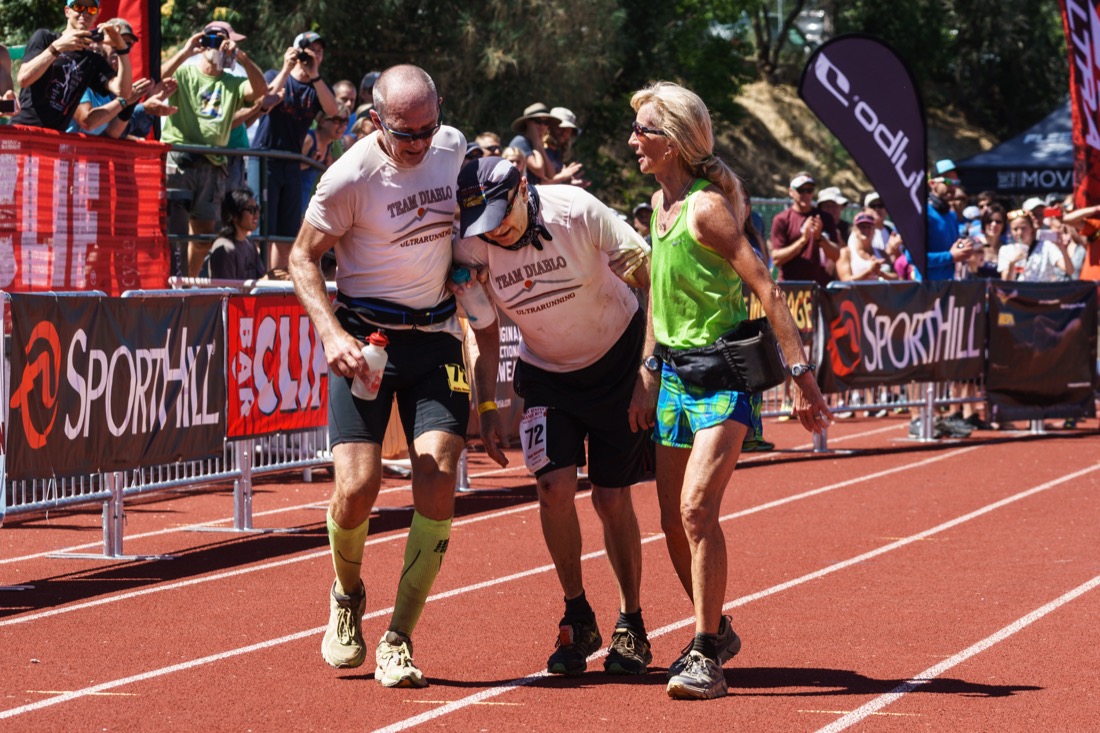 Just Another Number on a 100-mile Western States Journey

With each passing year, it’s a race we know we shouldn’t be running.

But often, against our better judgment, knowing full well the runner we were last year, or 10 years ago, or 20 years ago could be far different from who we are today, we run it anyway. We compare one year’s performance with that of another. We look back. We picture our younger self and wonder if our older self can still compare.

With about five minutes to go, I started to realize, ‘You’re not going to be able to get around the track fast enough

And then there are runners like Wally Hesseltine. As much as he’s accomplished in the past – and consider that this is a man who has a 36-year streak of running at least one race every month – it’s not about what his younger self has done.

It’s about what is still to come.

At 73 years old, he’s the first to admit that on occasion he experiences similar lapses. At Way Too Cool 50K in Cool, California, in March, at the beginning of the race, down a long, paved road, surrounded by hundreds of excited runners, Hesseltine found himself racing his old self.

“You know how it goes,” he said with a chuckle. “You try to race at a pace you used to do at a race you’ve done many times over the years. Then, of course, after about a quarter or a half mile, you realize you can’t do that anymore. You can’t race yourself.”

Then what’s the point, especially if age slows us all and time waits for no one? That’s what Hesseltine is hoping to find out over the next few months.

“Well, that is the question, isn’t it?” said Hesseltine, an attorney who lives in Lafayette, California, has been married to his wife, Lynn, for 50 years, and has two children and five grandchildren. “Can you be realistic about things, about being a year older, and still find what you need to finish? I think there are some things I can do differently, some small things, which should help.”

In order to understand why Hesseltine feels this way, you have to go back to last year’s race.

Going in, it wasn’t fear of the unknown. Hesseltine has finished 26 100-milers, including Western States six times.

“I had this sense of confidence that in looking back now might’ve been overconfidence,” he admitted. “I thought I was going to do the race smart, and it was going to go just fine for me. As long as I left about an hour and forty-five minutes to run from Highway 49 (6.5 miles) to the finish, I felt I could do it. It might be a strain at the end, and it would be tight, but I thought all along I was going to make it.”

The race, eerily, seemed to follow Hesseltine’s script. He went through the 93.5-mile checkpoint at Highway 49 needing 1:44 to finish. Time began slipping away at No Hands Bridge at mile 96.

A large group – family, longtime friends and training partners, well-wishers and people simply drawn into a similar historical vortex that had surrounded Swanson a year earlier when she had finished with just six seconds to spare – awaited Hesseltine at the top of Robie Point, with a little more than a mile to go.

Hesseltine had envisioned the moment as victorious, full of hugs and congratulations. Instead, it turned into a matter of desperation.

“With about five minutes to go, I started to realize, ‘You’re not going to be able to get around the track fast enough to finish in time,’” he said. “There was disappointment. But I just kept running fast … and then, once I was on the track, I fell down.”

Hesseltine’s normally short, quick, highly economical stride betrayed him. He pulled himself up, then wobbled to the finish line, in an “unofficial” time of 30 hours, 1 minute and 52 seconds.

As he was led to the medical tent, he asked for water, and a Coke. Within a couple of minutes he felt back to normal. Within a couple of minutes after that, at trackside, he posed for a photo with his five grandchildren. He had the look of a person who had just realized that although he was the oldest person at the finish line, he might as well have been the youngest. He was excited, happy and eternally grateful to simply have that special moment with his grandkids.

In the hours, days, weeks and months since Western States, Hesseltine, who hasn’t sought any special attention, has become a symbol to the ultrarunning community. Longtime Western States board member Tony Rossmann – himself in his 70s – made sure Hesseltine received a finisher’s medal.

“You tell Wally,” Rossmann told Lynn, “that a finish is a finish.”

And then there was a short documentary, created by Alex Massey, called “Thirty Hours.” The 12 1/2-minute film chronicled Hesseltine’s running life and his run at Western States.

“I did get a lot of, as you call it, notoriety, right after the race,” Hesseltine said. “And I appreciate the fact that if maybe what I did at Western States has helped people to strive to do something that requires a lot of determination, to do things that they maybe think they aren’t capable of doing, then that’s a good thing.”

Adulation and recognition are not, however, the prime drivers for him.

Since 1981, he has filled 35 of those red-covered Complete Runner’s Day by Day training logs, first made popular by “The Complete Runner” author James Fixx during the first Running Boom. In it are Hesseltine’s five finishes at the challenging Angeles Crest 100-miler; his 22-hour run at Western States in 2002; his 27-hour finish at Western States in 1995, during the dreaded “fire and ice” year of 28 miles of snow followed by temperatures that spiked into the 100s.

And then there is the psychological lift he receives from his running relationships.

“I love talking to people,” he said. “When you start out and are new to the sport, maybe you visit more with the people near the front of the pack. Then maybe you slow down a bit and you begin to meet the people in the mid-pack. It’s very, very fun. Back in the pack it’s been just as fun for me as anywhere else in the lineup. It’s given me an opportunity to spend time with some very good people.”

Finally, there is a competitive streak in Hesseltine, one that doesn’t necessarily see his results through the prism of age. It’s more about his own inner motivations, which center on consistency, process and accountability.

“Ultras are a little unique in that you can maintain them well into your 60s,” he said. “But, when you reach my age, you just have to be realistic. You may not be as fast as you once were, but you do have the experience and the strength you can gain from those experiences.”

And maybe that is why Wally Hesseltine knows the biggest achievements aren’t rooted in the deepest ambiguities of racing a younger version of himself.

Instead, it is the hard-won accumulation of experience that makes growing older worth it.

“There are times, definitely, when you think you’re not going to be able to make it,” he said. “But eventually, you realize you will make it, that it’s something you need to finish. You tell yourself, ‘I’m going to run 100 miles.’ That’s why I’m going to give it a go.

“I’m going to be trying hard, so that this year, I can get it done.”

Thirty Hours from alex on Vimeo.

These amazing aged athletic’s never cease to amaze me. They are the mentors to our future and define the phase “because I can.”

I have been Wally’s friend and sometime running partner since the very beginning of his 35 year “race a month” streak. He is a special, tough, great guy. Long ago, Wally cracked his pelvis skiing. His doctors told him he had to give up the streak. Needless to say, he ignored them and hobbled through slow monthly 5ks until he heeled. Tough indeed.