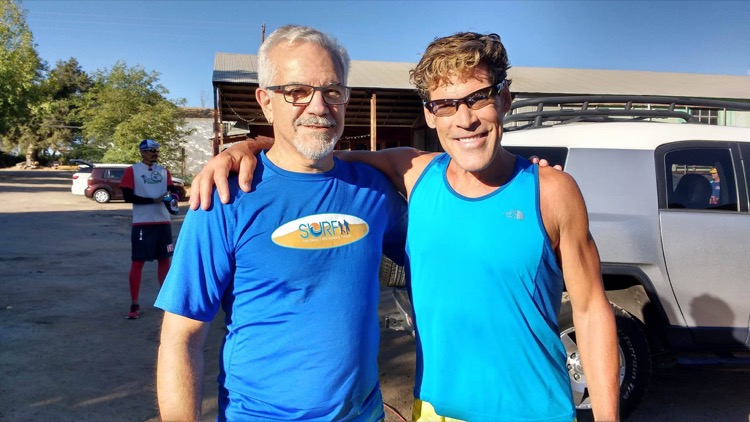 John Martinez left behind the chaos of being a Race Director for a few moments at his own race to take a few laps around the 1 km course. Alone, John was guided by nothing more than the full moon and specifically placed glow sticks, marking the course for only one reason… “This event is all about the pure love of running.”

The Julian Station Full Moon 12/24 Hour Run in only its second year running, is a small intimate race with mostly local runners that takes place in Julian, California. There was a total of 51 runners this year. Julian is about an hour outside of the city in San Diego’s local mountains.

What makes this run so cool is the start/finish/one-and-only aid station is all rolled into one pop-up tent accompanied by an RV. And it sits right behind Julian Station which is a gigantic barn that houses Julian Hard Cider tasting room, a Mead tasting room, Beer tasting room, and a Mexican restaurant. With a fun group of runners who you see and converse with throughout the loops, then throw in the alcohol being so close, this run is potentially a party waiting to happen… A “party on legs” if you will.

My brother and I even took a break from the race about five hours in to have a burrito inside the Station and a couple bottles of Coca Cola. Suddenly, John Martinez was sitting with his lunch next to us shooting the breeze and watching the runners go past at a distance. Later on in the race this became infamously known as the “Burrito Break” with the other runners. Or maybe just their jealousy, because it paid off.

The course runs through a local farm and one loop equals 1 km. In the 12 or 24 hours one registers for – they put out as many laps as they can. John said, “People ask ‘how many finishers?’”  And my response is, “there is no finish. You can run one lap or you can run one hundred, it makes no difference. It’s kind of like being a kid. You play until you drop, then you get up again and play some more. And you get to do it with some of the best people on the planet.”

The thing about a 12/24 hour race is it takes a certain mental toughness to push through the monotony barrier of running loops instead of going from point A to B, or even the benefit of a change in scenery as in one giant loop. It definitely takes a certain focus to tap into the perfect rhythm. The best part about it is you do get to spend time with and get to know most of the runners throughout the race as you lap each other over and over.

Here’s what made this year so unique – imagine having a small house party back in high school with just you and your closest group of friends. Then suddenly the high school quarterback walks in and it’s Aaron Rodgers.

Now getting back to that small intimate “party on legs” in that tiny town of Julian – that quarterback showed up this year, except it wasn’t Aaron Rodgers, but Dean Karnazes.

Dean Karnazes came walking up wearing bib #1. Of course nobody seemed to argue that. My last name starts with a Z, hence bib #53… I’ll tell you, Dean is one of the nicest guys you’ll ever meet. As he passed people on the course he would slow down and chat. He talked to everybody. I heard him tell more than one runner that if they needed anything his parents were there and just ask them for help. Class act without a doubt.

John Martinez got to run Dean’s first few laps with him. I asked Dean later on about his thoughts. He said, “The Julian Station Full Moon was a throwback to the modern day ultra, an intimate and low-key affair that brought together participants in a magical sort of way. For me, someone who races and travels to events around the world, it was a unique and highly enjoyable experience, a rehydration tonic for the soul.”

I completely recommend this race because when you show up on race day, you can decide what you feel like running… marathon, ultramarathon, half marathon, 15K, 10K, even a 5K… Whatever it is, it’s just for the “pure love of running.” Besides, you never know who’s going to show up.

Awesome write-up Randy! I really missed being there to support the runners this year.