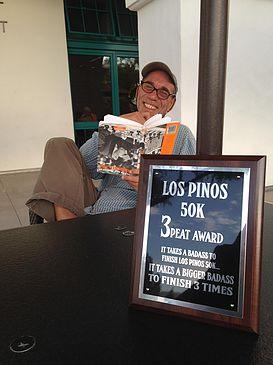 Anthony Bourdain, 60-year-old New York-born chef, known for his unapologetic in-your-face honesty on his television shows such as “Parts Unknown.” A man who eats fly-ridden meat off the street carts throughout markets of third world countries around the world while asking a man how to translate how much his government sucks in native tongue.

John Vanderpot, 53-year-old New York-born Ultrarunner. A San Diego State University English Professor with a running resume that could be published as a novel in its own right. On September 10 he will attempt his fifth consecutive (excluding 2012, the year the race was cancelled) completion of the Los Pinos 50K. He currently has the most finishes by a runner for what some consider one of the most badass 50K courses around. Devastating heat and killer climbs with a 12 hour cut off time… It has it all. Yes, I said 12 hour cut off time.

At a prerace meeting for a 100 miler earlier this Summer, a couple of hundred runners and the race director at the forefront with a microphone: “Do you know what you eat for potassium?… Bananas.” A shout from a voice in the audience: “NOT BANANAS!” The crowd turns. It’s John Vanderpot with his New York accent who unapologetically speaks his mind. I was looking for his television camera crew (there was none). The next day in 100-plus degrees at an aid station during that race, he schooled me on a potassium concoction of a watermelon and potato combo while I was bent over with bone-crushing cramps, already a dozen bananas in. He made me a believer. The man can yell at you while giving life-changing advice (even to a complete stranger) because he simply cares.

As Bourdain films another award-winning episode of “Uknown Parts,” Vanderpot, the SoCal legend, finds himself appearing on a show of his own in September—the Los Pinos 50K. He’s bound by his streak to complete his fifth year in a row and for his efforts, Los Pinos awards him his own “Emmy”— #1 bib for certain not because of his “back of the pack” pace, but because this badass keeps returning year after year and remains king. Besides, he has no choice, for six other runners are on his heels with three consecutive finishes in a row each (going on their fourth) and John wants to keep his #1 bib. The Los Pinos season premieres September 10, 6:00 a.m. Pacific time.

John is my son and there’s no stopping him despite that !