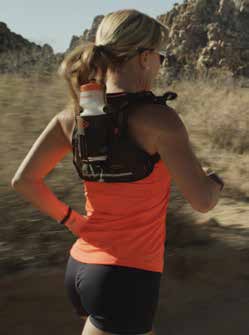 Over the past several years, innovations in hydration science have evolved at a somewhat steady rate; it seems like every summer there are advanced formulations, newly discovered ingredients, or enhanced electrolyte blends that promise to improve our performance. For the containers that hold those drinks, however, it was a different story.

Historically, ultrarunners had one of three options for carrying fluids on the go: a 20-oz water bottle in the hand, a bottle in a waist pack, or a fluid reservoir in a backpack. And while there are minor differences from one company’s products to another’s, there has been relatively little variation in those products from year to year, and minimal expansion of the types of products that were offered.

Recently all that has changed, and now there’s almost a larger and more varied selection of hydration carriers than anyone can keep track of. That’s not to say we can’t have fun trying, though.

This is the first of a two-part series devoted to all the options at your disposal to make hydration on the trail as fast, efficient, and user- friendly as possible. In Part 1, we’ll look at handheld and waist-mounted packs (or as I like to call it, Bottlepalooza), with back-mounted hydration packs to follow in Part 2 next month.

So how do you determine where you stand on the bottle vs pack question? For most of us, it’s a matter of trial and error, personal preference, and situational needs. Having said that, it’s safe to make a few generalities about deciding between a bottle pack and hydration pack.

Bottle packs – either hand-mounted or waistmounted – carry less fluid and gear, and typically weigh less than a vest or backpack. Hydration packs are built for larger volumes, and are ideal when you have limited support or need to be prepared for a wider variety of conditions. Consequently, many runners use hydration packs for long training outings, or for ultras that feature multi-hour stretches between aid stations. Smaller, lighter handhelds or waist packs are often preferred for training runs with periodic access to aid (such as a drinking fountain, convenience store, or your car), or races with more frequent aid station support.

Bottle packs are more versatile and generally considered easier to clean than hydration packs, as the standard 20-oz bottle is simple to wash, dry, and re-use. However, that’s not always the case with some of the new bottles, as we’ll discuss shortly. They also used to be the cheaper option, but with some of the more advanced bottle systems, you can shell out as much as you will for a backpack or vest.

So what exactly has changed in the world of bottle packs? Mainly, it’s the bottles themselves. That standard 20-oz bottle you used to use is anything but standard nowadays – in fact, it’s almost becoming the exception. Differences in size and shape are rampant nowadays; if you can’t find something you like, you haven’t looked hard enough.

Take size for example, where less has apparently become more. Small-volume fluid containers debuted on the triathlon scene, but they’ve crossed over almost seamlessly to the ultra community. The smallest trail running flask is Salomon’s 5-oz Hydro Sense ($40 for the handheld version) soft-sided container, while CamelBak’s Podium Arc, Amphipod’s RunLite AirStretch, and UltrAspire’s Molecular Belt System all offer 8-oz bottles as part of their lineup. By the time you step up to 10-oz bottles, almost everyone’s at the party: CamelBak, UltrAspire, Ultimate Direction, Amphipod and Nathan all have entries in this category.

Small flasks can be carried in hand holsters, or worn on the waist either individually or in multiples. For example, CamelBak’s lineup includes the Arc1 waist pack with one bottle ($35), the Arc2 with two bottles ($45), and the Arc4 ($60) in addition to the Arc Quick Grip handheld ($20). And the waist packs themselves are the result of significant innovation as well.

One unique design system is UltrAspire’s Molecular Belt System (MBS), which involves mixing and matching the components you want on the front and back of your waist. A fitted “Connector” front piece like the Electron ($25) combines with a “Core” piece like the Synapse ($40) or Ion ($45) that have a pocket or two and hold bottles of 8 oz to 20 oz. It’s the ultimate in customization for individual needs, and Cores and Connectors can be used interchangeably.

Other waist belts are pushing sleek and light functional design to new extremes. Ultimate Direction’s Jurek Endure belt ($40) weighs 6 oz, and provides a zip pocket in front and a stretch mesh pocket between two 10 oz bottles in back. Salomon’s Advanced Skin S-Lab belt ($70) is one ounce lighter with dual front zip pockets and elastic pouches, and accommodates up to two 8 oz flask pouches.

Obviously the tiny-bottle trend allows for a variety of uses, but there’s one notable drawback: small bottles are much harder to clean than large ones. The mouth openings are narrower to reach into with a sponge, and trickier to properly position in the dishwasher. Softsided containers like Salomon’s require something stuffed into them (like a scrunched-up paper towel) to keep the interior sides from sticking together while drying, which sort of diminishes the convenience factor of using bottles in the first place.

If you’re a large-bottle (20 to 24 oz) purist, fear not: you have plenty of new options to choose from as well. In some cases the innovation is in the shape of the bottle – such as UltrAspire’s angled neck design, Amphipod’s ergonomic curve, or Salomon’s collapsible bodies – but the recent action in this category is focused on the stuff that goes around the bottle.

For waist-mounted carriers, Gregory’s Tempo D1.5 or Pace D1.5 ($59) are male and female versions of the classic angled-bottle setup, with a 24-oz bottle and two separate gear pockets on each. Gender differences in these packs consist of angled waist belts that accommodate disparate waist-to-pelvis slopes between men and women. Gregory’s handheld units – the Tempo HH and Pace HH ($29) – are also marketed as gender specific, with a narrower strap on the female version. Amphipod offers a 20-oz bottle held horizontally when you want to add fluid and a small pocket at minimal carrying weight in the Full- Tilt Velocity ($39)

Other companies offer a wider variability of features in handheld large-bottle packs for you to choose from. Some have insulated bottles, such as Nathan’s Fire and Ice ($25 with holder), while others such as Ultimate Direction’s FastDraw Extreme ($26) wrap an insulating material around the bottle to prevent your body heat from warming the drink too quickly. Another cool development is sweat-proof pockets, such as on UltrAspire’s Isometric Magnon ($32), to keep your salt tabs, Tums, or painkillers dry all day long.

Most handheld carriers have a small pocket or two, but some are designed to keep your smart phone handy and functional on the trail. The Nathan QuickView ($30) has a see-through, weather- and sweat-resistant, conductive touchscreen for those unfortunate souls who can’t simply leave Facebook alone for a while. The obvious drawback to this one is that between a full-size smart phone and full 22-oz bottle, you’re carrying a lot of weight in your hand – so you may as well just find a good waist pack to carry it all.

Finally, as a precursor to our next installment, there’s this: a company called Orange Mud has developed what might best be described as a hybrid between a waist-mounted bottle pack and a backpackstyle hydration pack. The HydraQuiver ($85) holds a 24-oz, wide-mouth bottle, but is worn between the shoulder blades with backpack-style straps. Think of it as a bottle carrier for those who hate waist packs, or a hydration pack for those who hate fluid reservoirs. It’s also one of a whole new crop of pack designs available this summer, which we’ll review in Part 2.

A few observations:
* Men tend to be more comfortable with waist packs; a higher percentage of women are not.
* The lightest vests weigh the same as the heavier waist packs, but carry much more.
* A treadmill test measured a meaningful increase in energy expenditure when running with something in your hand, as compared with the same weight on your waist or back, which were equal.

Agree that weight carried in your hand is less efficient than in a pack or on your waist (dictated by physics!), but there’s the other part to note that dumping core heat is also a critical thing to accomplish in many situations to maximize performance. For that reason, I moved from a pack to a two bottle waist belt for warm weather racing, even though I prefer running with a pack. For long runs on my own, it’s a pack.

Been using my OrangeMud since November and literally the best pak I have ever worn. So simple and perfect and you completely forget its there.

i’d be curious what the double bottle holder from OrangeMud would feel like. The single looks great, but I drink like horse, and not sure one would be enough.

its out of my price range but the reviews I have read are very enthusiastic about it and I have been able to hack my single to sort of make up the difference. I have both the 2013 and 2014 version and they both can do the same hacks. Hack #1 – often I will go out for a long morning run starting at 4am and ending at 9 or later. I hate wearing a headlamp any longer than I have to and cant stand having it in a jacket pocket so I added very small carabiners (the cheap ones at the Home Depot checkout) to each of the corners of pack in the back and when the sun comes up I just loop the headlamp band to each of the four corners and its tightly secured against the bottle chute and doesn’t get in the way of the bottle. Hack #2 – I added a 12″ bungee cord laterally around the middle of it and am able to store a 10 oz amphipod bottle next to the 24 oz bottle holder for when I need extra juice. It also does not bounce and I get the “2nd” quiver for free. 😉

Thanks for the additional information. I like having lots of fluid, but for racing, packs are so horrible to stop refill – especially when your hands are numb – and with a singular bottle I always worry it will not get me to the next aid station. So your hacks and insight are appreciated.

OrangeMud double bottle…the best ever. Hands free to brace myself on falls…:-) Plenty of fluids; one for water one for electrolites.

This article leaves out the most important consideration for me in using handhelds: I can see precisely how much I’ve had to drink and how much I still have left in my bottles. Packs don’t allow me to do that. It’s always a guessing game.