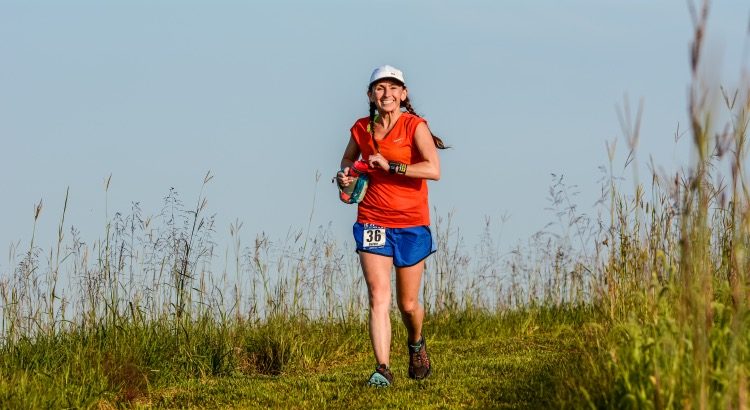 Do you have good light up there?

From somewhere in the woods at Clinton Lake State Park near Lawrence, Kansas, my husband and photography partner Rick Mayo sent a check-in text to my phone. We went our separate ways after the start of the Hawk Hundred, a 100- and 50-mile trail race hosted by the Lawrence Trail Hawks, to capture photographs of the runners in various states of suffering and euphoria. A couple hours into the race, I was stationed on Bunker Hill, a three-mile grassy reprieve from the remaining 22 miles of rocky, rooty singletrack on this 25-mile loop course. I was crouched low in the big bluestem grass, waiting for runners to cruise downhill toward my telephoto lens.

Not bad. I’m shooting with the sun just behind my right shoulder.

I’m still on Blue Trail, a bit past Mud Creek. Set up to shoot 100 milers.

While I gravitated toward the open prairie, Rick set up in what we call the “Green Tunnel”—the passage runners take through thick tree canopy framed by walls of tangled underbrush. The shaded trails provide shelter from the sun, but also hold the runners in a firm embrace of Midwestern humidity. Sometimes the summer heat breaks in time for the Hawk Hundred, but not this year. The temperature climbed well over 80°F. 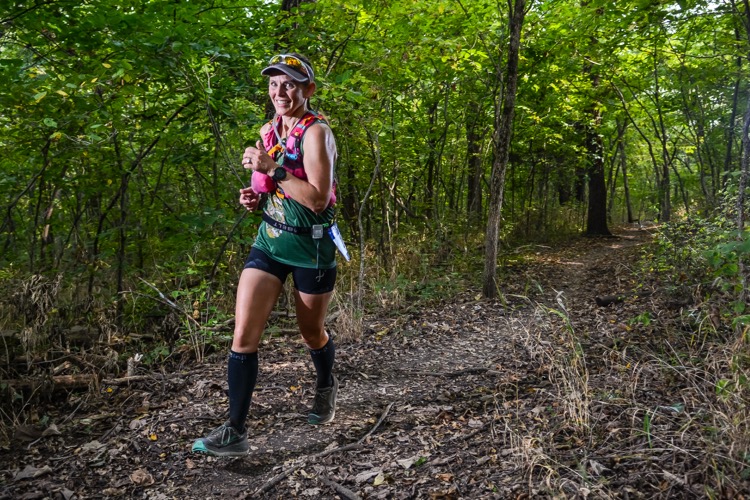 Photographing the race provides a unique perspective. Rick usually stays on the course, moving from one vantage point to another throughout the day. He gets to see runners in all modes of the ultra experience. At this Hawk, by mid-day, he saw them melt in the heat. I floated back to the finish line, where I watched the 50- and 100-mile runners and their crews trying to tape, ice, hydrate, and nourish themselves back into form before heading out for more loops. 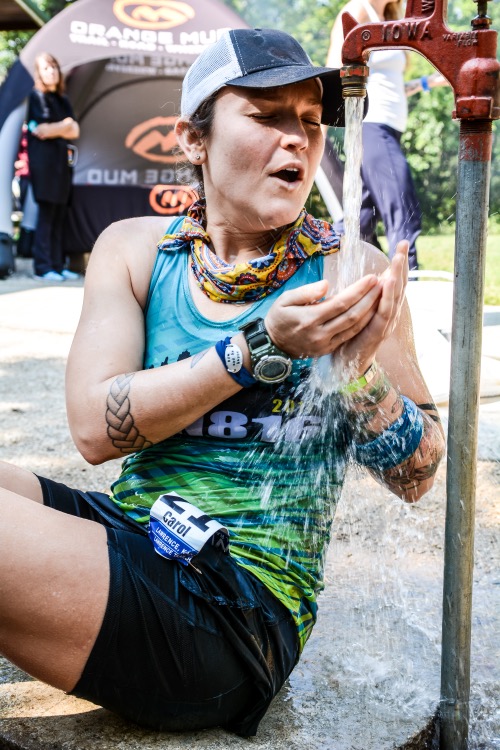 Haven’t seen a lot of Hundos coming in to finish their second loop.

Rick was now about a mile from the start/finish area. At 4:30 p.m., 10.5 hours into the race, only a handful of 100-mile runners had begun their third loop. That second loop was proving to be a slow one. The lead runners were the exception: Daniel Arnold from Benton, Arkansas won the 50-mile race decisively in 7:45:41. In the 100-mile race, Nicholas Kopp of Seattle, Washington—winner of the 2017 Black Hills 100—hit the 50-mile mark about 10 minutes ahead of returning Hawk Hundred champion Jeremy Morris, who came into the aid station covered in trail dirt. Morris would later recount falling four times during the race, and in his normal amphibious fashion, opted to climb in the lake on each lap to cool down. The rest of the field was slowing down, biding their time until the sun set and temperatures would hopefully drop. 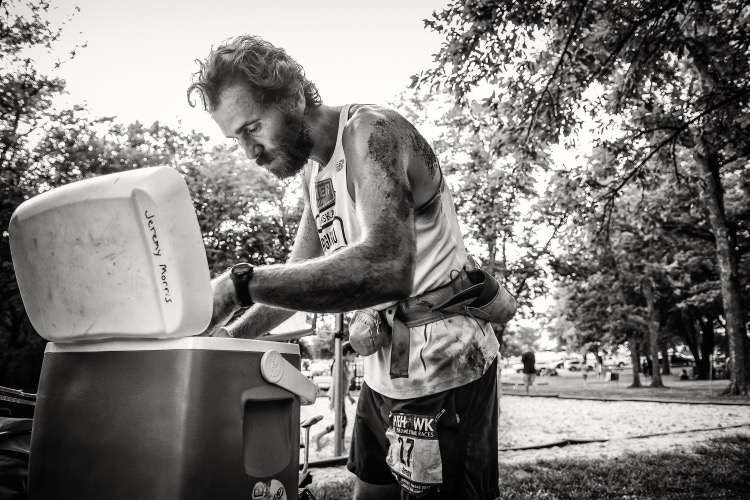 I think they’re very spread out.

Waiting in the woods for runners gives a photographer time to observe nature.

I think there are ten spiders for each square foot on this course.

With the impending sunset, Rick took over the finish line and I moved back to Bunker Hill to attempt to capture a runner with the western horizon as a backdrop. While I was up there, only four runners came past me, including Tesa Green, the female 100-mile leader. “Damn it, I’m going to have to run,” Green reported thinking when she saw me perched up on the ridge. “We reached the top and I looked back to see we made it, and there was a glorious sunset behind us. That was all the pep I needed to run towards Kristi.” 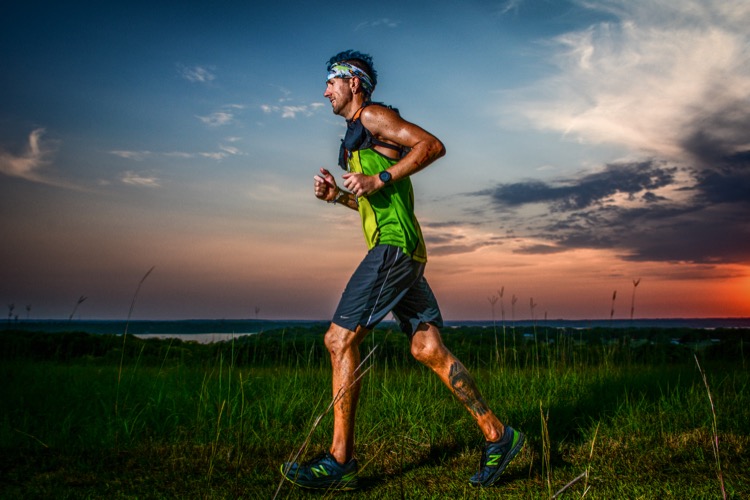 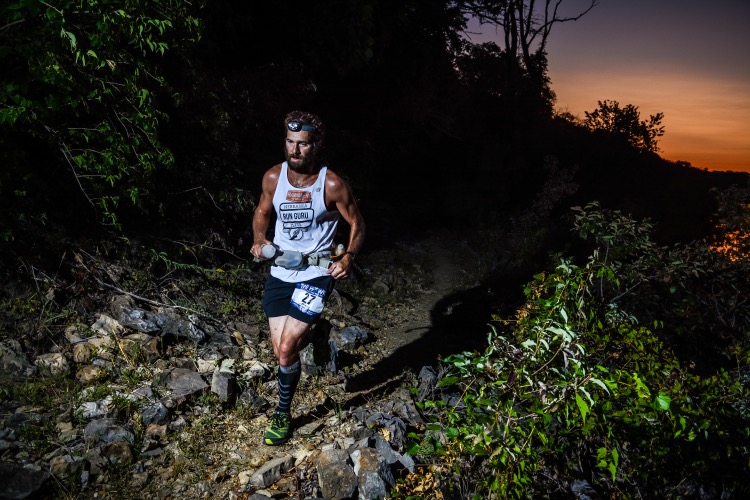 Jeremy Morris of Kearney, Nebraska heads out for his second consecutive win at the Hawk Hundred. Photo: Rick Mayo/Mile 90 Photography

Once the sun was down, Rick and I took turns manning the finish line while the other napped. We anticipated runners might move a little faster in the cooler night air, but it never really cooled down. Temperatures hovered in the 60s, and when combined with the high humidity and fatigue, there was little improvement over the daytime conditions. Plus… it was dark. 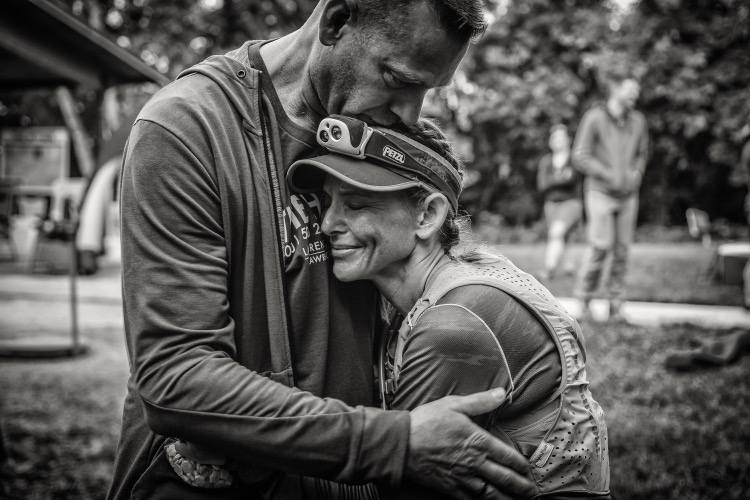 Tesa Green soaks in the satisfaction of a 100-mile victory at the finish line. Photo: Kristi Mayo/Mile 90 Photography

Morris won his second Hawk Hundred at 2:16 a.m., followed by a trickle of 24 other runners throughout the night and into the next day. Kopp, who led for much of the race, finished second only about 24 minutes back. Green maintained her lead to finish first female, surrounded by a sizable crew of human and canine supporters. Barbie Stephen, who chose the Hawk as her first 100-mile race because of “the amount of support, the variety of terrain, the swag, and rumor had it that the aid stations were like gourmet buffets,” finished second. And even after the race was over, she got additional support from the race photographer when she sat for too long at the finish line and had difficulty getting moving again.

I lent the gear wagon out. So Barbie’s crew could transport her to the restroom. Got pics of her. Not the bathroom part. 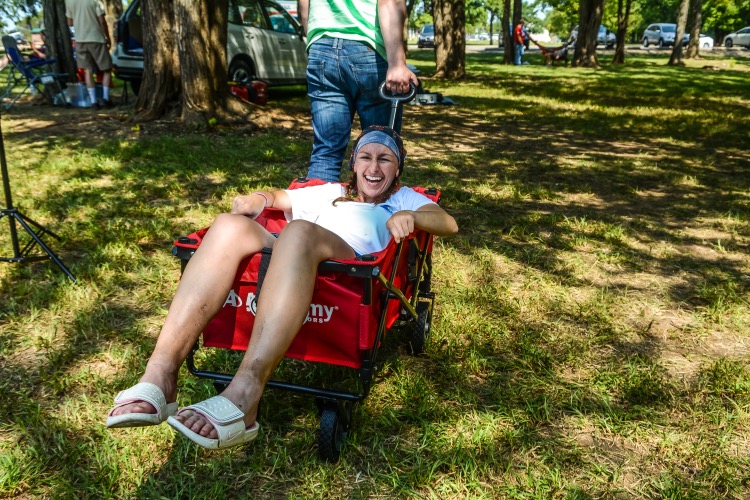 After finishing second in the 100-mile race, Barbie Stephen gets a ride to the restroom in the photographers’ wagon. Photo: Rick Mayo/Mile 90 Photography

I love this article! I wish all photographers wrote them.

Thanks for all you do 🙂

This photographer writes as well as she shoots, which is saying a lot. Gorgeous pics and great story.