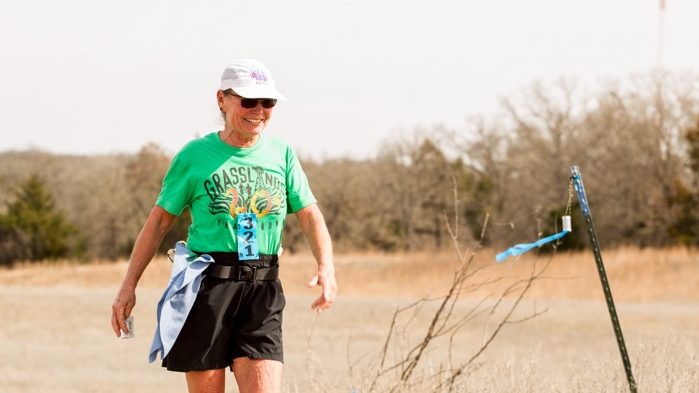 The creator of the Grasslands Trail Run, Suzi Cope, took to the trail for some fun. Photo: Ryan Lange

In 1999, Suzi Cope created the Grasslands Trail Run not long after moving to north Texas from California. As a pioneer in women’s ultrarunning – she was the first woman to complete the Grand Slam – it was important to build a stronger trail running community in her new home state. An avid equestrian, she was introduced to the trails in the LBJ National Grasslands, finding the perfect venue to start a new north Texas trail running tradition.

A year ago, I reached out to Suzi and Michael Cope and other “seasoned” trail runners in the area, to prepare them for the 20th year celebration. When registration opened in October, their friends were among the first to sign up, along with Suzi and Michael themselves, and their family from California.

When respected members of the trail running community go out of their way to come to your race, you’re on the hook to make it a memorable event. The greatest pressure came from a man known to many as “The Ancient Brit,” informing me that he would be flying “over the pond” to complete the half marathon distance at the age of 90. Lou Myers is his name and he would be accompanied by Chrissy Ferguson, his daughter, and a well-known race director in Arkansas. Want to know pressure? Hear from a 90-year-old man that he is traveling more than 7,000 miles just to come to your race.

Now the weather just needed to cooperate. As race day approached, the weather forecast showed a menacing thunderstorm that threatened to ruin all our plans and quite possibly the race for a 90-year-old man and many others.

Not surprisingly, the race report for the first annual Grasslands Trail Run started with concerns about the weather. The report was published in UltraRunning in September 1999 and as a new race director, Suzi lamented about thunderstorms in the morning that forced her and Michael to purchase extra tents and equipment while keeping runners away. On that day in 1999, the early storms cleared away and the sun came out by the time most runners started their second loop. And in 2018, those menacing thunderstorms never materialized and we only felt a light rain in the late afternoon.

In reading Suzi’s first race report, I discovered that the personality of the Grasslands Trail Run started in the very first year. Suzi selected the Grasslands because it was the perfect place for people to run their first trail race – or first time at a new distance. That continues today as year after year, we are joined by runners who have selected Grasslands as “their first” – first trail race and/or longest race.

Runners of the 50-mile race run a correction loop followed by the entire Blue, White, Yellow and Red trails and return to the start/finish aid station after each loop. The benefit of the loops is that the runners can return to their drop bags multiple times but since each loop is on a different trail, runners experience different terrain and scenery. The start/finish line grows into a party-like atmosphere as finishers feast on BBQ and beverages of choice while talking to friends and cheering on their fellow runners. It is our trail running community at its best. 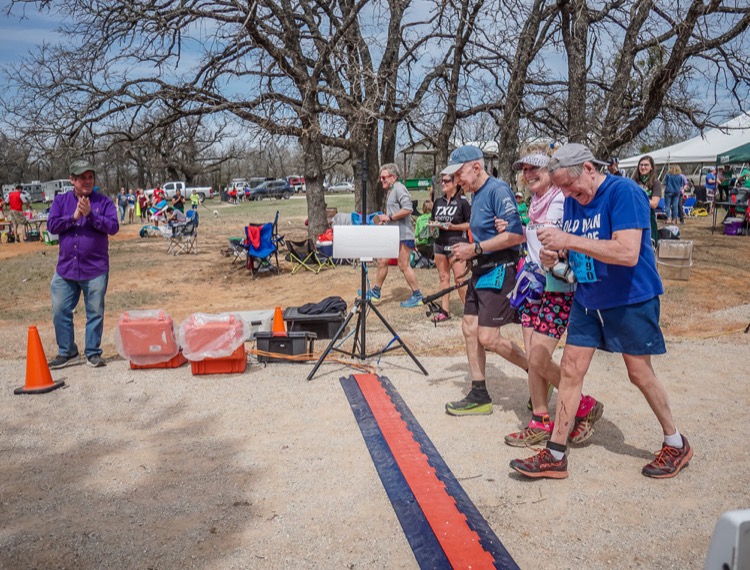 The 90-year-old “Ancient Brit” Lou Myers, his daughter Chrissy Ferguson, and Jay Norman crossed the finish line to the loudest cheers of the day as they completed the half marathon distance. Photo: John Lai Photography

There were plenty of fast times and those race results will speak for themselves. I loved standing at the finish line to greet the finishers. That included Suzi and Michael, her son and granddaughter, Jay Freeman (who has run all 20 years), and many of the runners who took to the trails because of what she started in north Texas. Completing the half marathon together in 5:41:12, the Ancient Brit, Chrissy, and Jay Norman crossed the finish line to the loudest cheers from the crowd. Thanks to Suzi, the trail running community and the weather, the race delivered the perfect 20th anniversary celebration.

What a great article – Loved the race and all your wonderful volunteers! Thank you for making my Dad’s last trip “Over the Pond” one of his most memorial events…. Happy Trails Chrissy