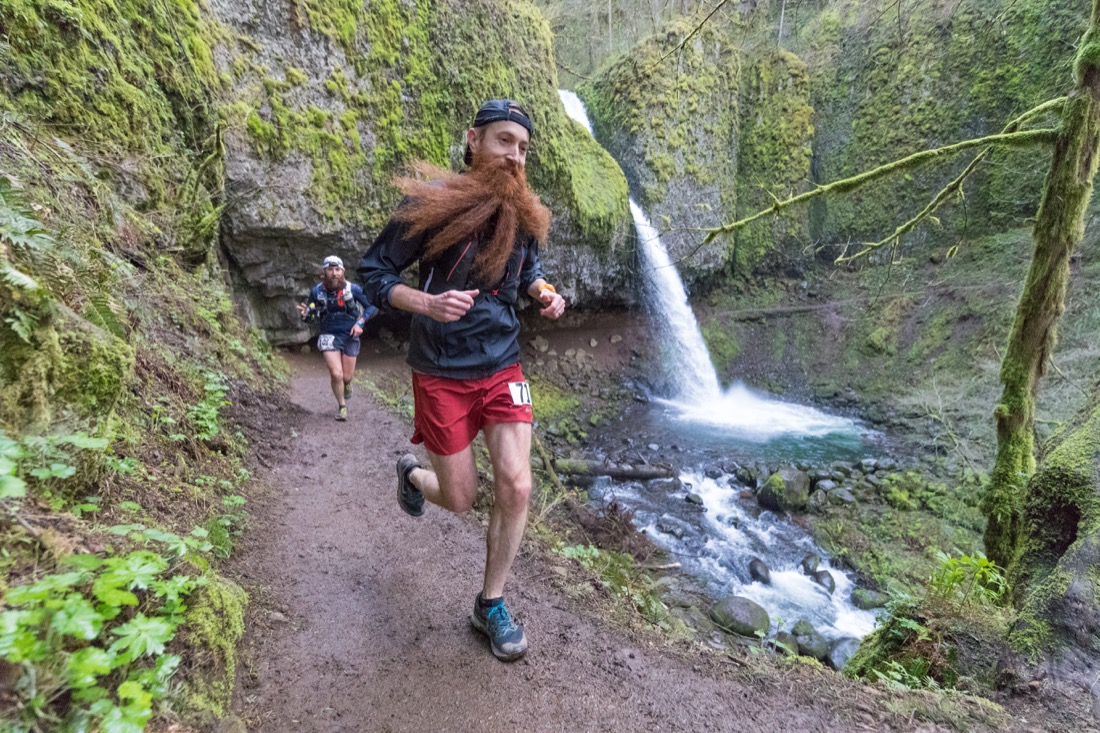 Gorge Waterfalls: Beyond the Back of the Pack

Adjusting the straps on my running pack for the hundredth time, I wait for the go ahead from the race directors. Nerves fill my stomach with anticipation, but also for the task at hand. The day is going to be a long one on the trails. The Gorge Waterfalls 100K organized by Rainshadow Running has been going on for the last seven hours, yet the day is just beginning for me. 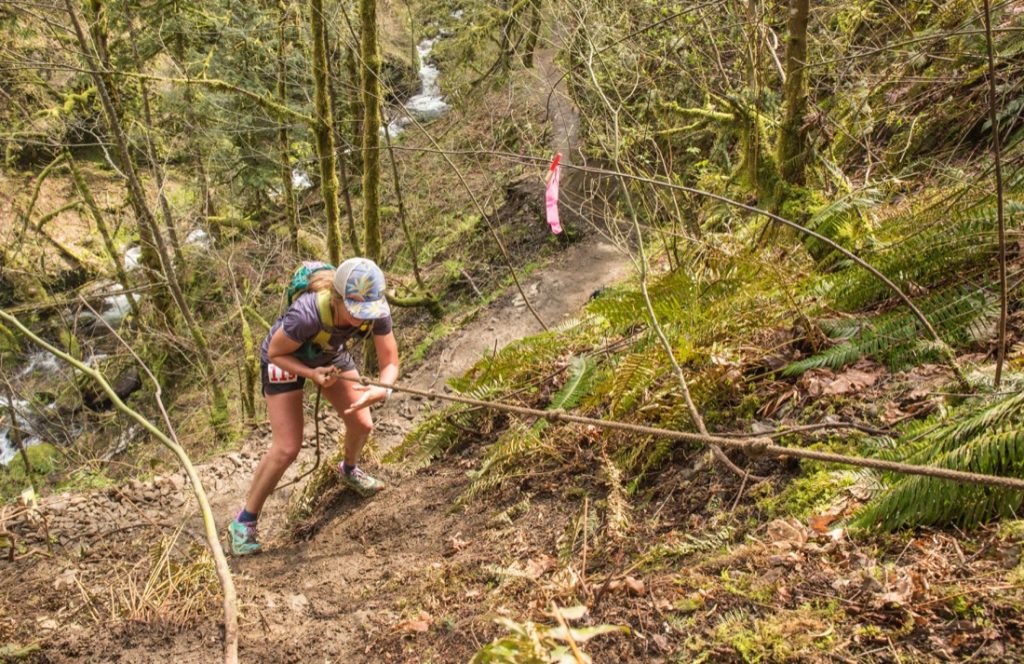 An easy reroute runners had to use this year due to a mudslide. Photo: Myke Hermsmeyer

The back of the pack runners come straggling in to Wyeth Campground. Thirty-one miles is a tough distance no matter what day it is, even if running sixty-two is your goal, and these runners have endured thirty-one rocky, rooty, sloppy, and gorgeous trail miles in the Columbia River Gorge. And still I wait for the last of them to saunter in so the sweepers, my comrades in legs, and I can chase off in search of the last runners. Yet that doesn’t happen. After over an hour of waiting, impatience and worry set in…worry for those last few runners on the course and their safety, which is the biggest concern of a sweep. With anxiety surging through me, I call the race director for instructions on what to do. With our safety to think about as well, we are released onto the trail, chasing the sunset and last runners as word comes through that Jim Walsmley, at the front of the pack, has crushed the course record by almost an hour!

Jim Walmsley heading back from the 100k turnaround with nobody else in sight. Photo: Glenn Tachiyama

Climbing gradually, but consistently out of the campground, it doesn’t take us long to run into one of the racers unaccounted for, still in good spirits and moving forward. Sending the runner off with good thoughts and a high five, we continue along for a mile or so before we run into the last and final racer who is an acquaintance of mine from past races. With more well wishes and some banter, we send him off to the aid station and continue along the course. At this point, due to our late start, we sweeps can run full speed, bounding over roots and skipping along rocks all of which are out for blood. And then we hit the PCT, only for a few miles, but right away it is evident that the trail has changed, gotten wider, greener and distracting in its majesty.

The PCT takes us to Cascade Locks aid station, and with a quick refuel we take off, intent on catching up to the pack. But we don’t. Instead, as the sun sets and the moon rises, we run into the race director at a washout in the trail and a rope…going up. We scale the rope and ponder what it would feel like to be doing this with over forty miles already in our legs. But that’s short lived as we are quickly shuttled by car to the next aid station, skipping the two-mile road section, to get us closer to the back of the pack. Headlamps blazing like the sun that just set, we could smell the last runners and knew if we caught up soon, we would have to push them to their already surpassed limit to help them make the cutoff time at the next aid station, seven miles away.

Miles click by on our watches as the darkness gets thicker around us, the sounds of the forest amplify as it does. Our breath intrudes on the stream of light coming from our lamps. Two turns later, we hear it. The thundering roar of water with nowhere else to go. Horsetail Falls looms in the night and with it the last runners. Making steady progress, but done for the day, we run with them trying to keep spirits high. We escort them in to No Name which is the last aid station and six miles from the end. 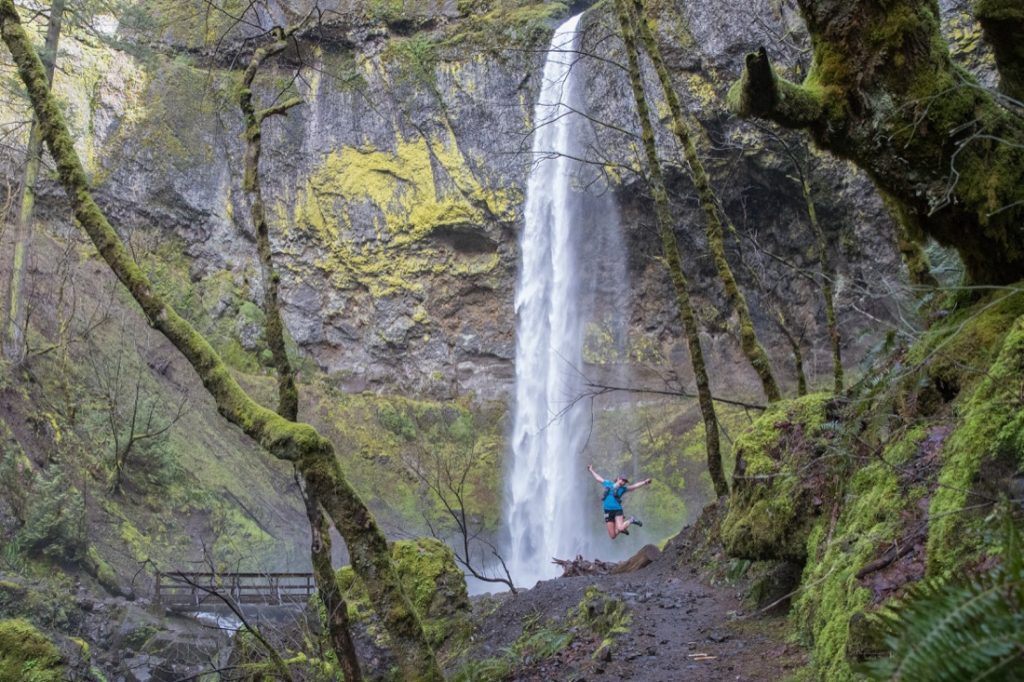 Yitka Winn shows some excitement at Elowah Falls around mile 49 in the 100k. Photo: Glenn Tachiyama

Pickles, chips, and coke fuel those last miles with one of the burliest climbs of the day. The last runners are not far, but they are intent on making it to the finish. Their determination is unsurpassed. To be out on the course for seventeen hours and still have the drive to push forward is inspiring. And being the sweeper, you get to bask in their desire, grit, and sheer will and store that memory inside you. Because in an ultra, things will go sideways, and during those moments, we, who have swept a race, can reach deep down inside and draw from the inspiration received running beyond the back of the pack. 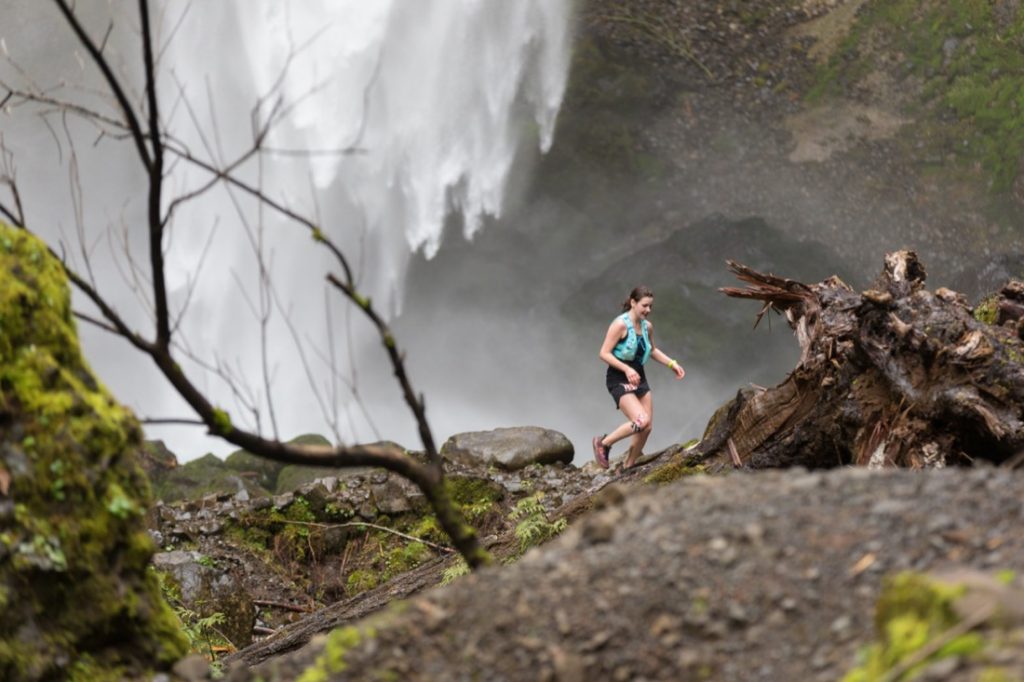 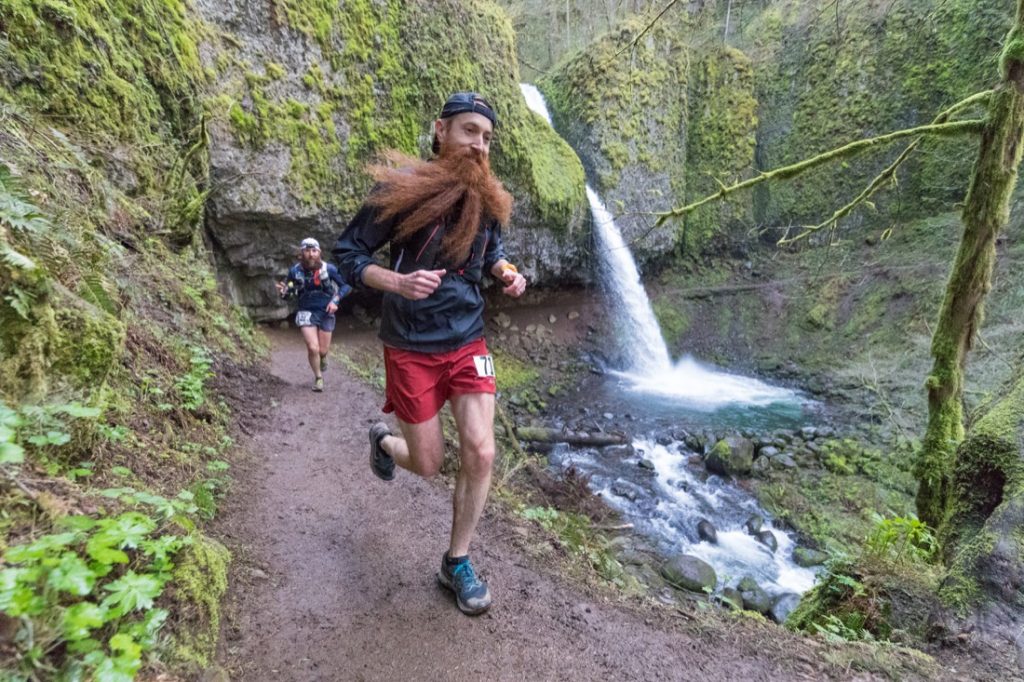 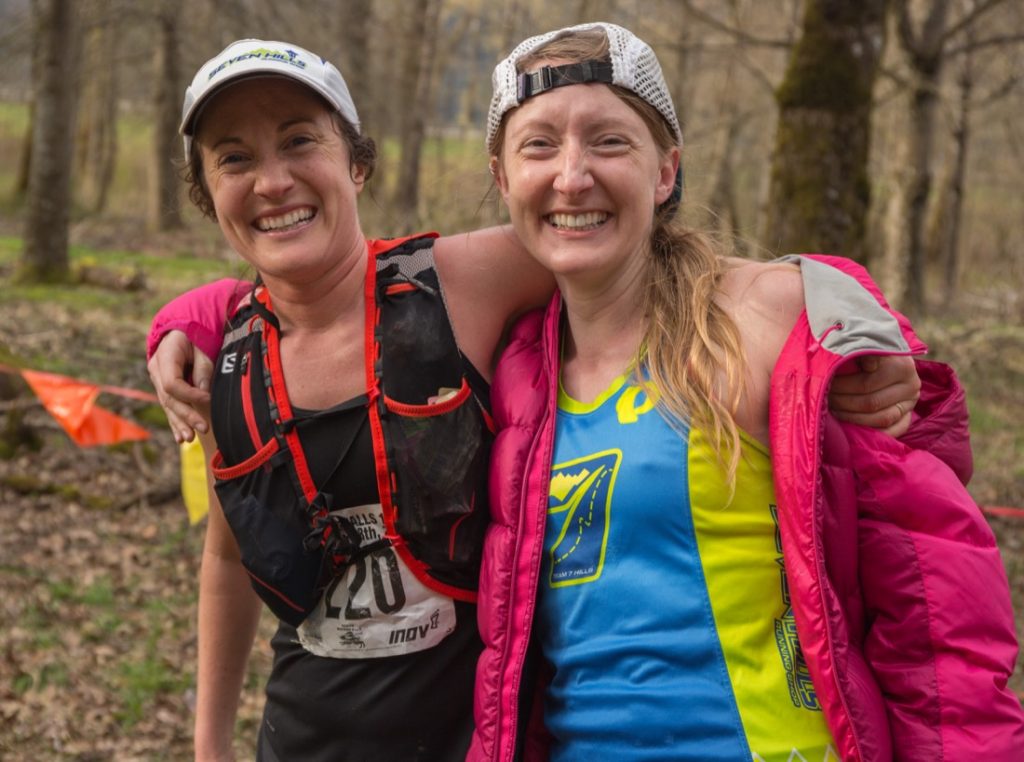