Diamond in the Rough: Kate Olson

As a kid growing up in Stamford, Connecticut, Kate Olson wasn’t allowed to run the mile in elementary school due to exercised-induced asthma. Once her asthma was under control, she turned her attention to ball sports and competed in soccer, basketball and softball as a teenager.

“I never ran cross-country, but I started running when I was 13 to get in shape for softball. The coach of my high school team told us we were going to run a pre-season 5k. I started training right away and really haven’t stopped since,” Kate said in a recent interview from her home in Studio City, California.

Even though she wasn’t able to compete as a runner growing up, her parents constantly remind her that she started running as soon as she could walk—always smiling, just happy to be enjoying the great outdoors. It seems logical that as an adult she’s progressed into longer distances on the trail. 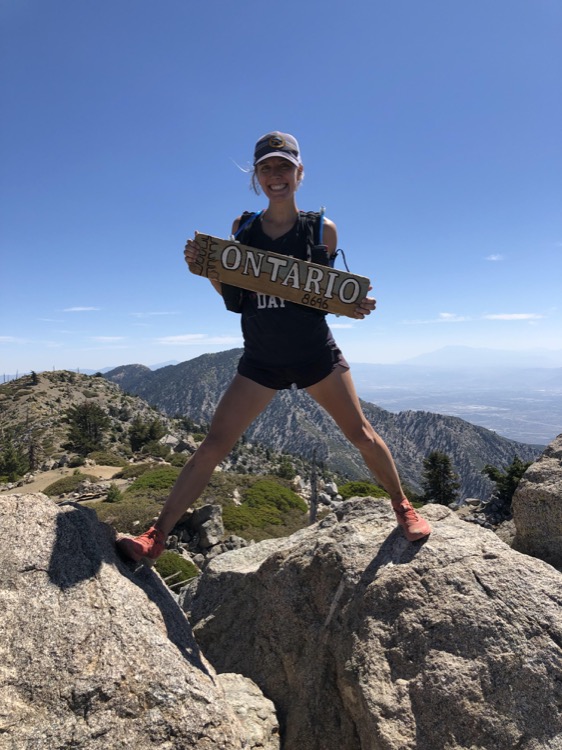 Kate is all smiles atop Ontario Peak in the San Gabriel Mountains of California. Photo courtesy Kate Olson.

After graduating from college and moving out west, she found herself searching for work and spending more time running, consistently putting in 10-mile road runs around her home in Southern California. It wasn’t until she picked up a copy of Ultramarathon Man by Dean Karnazes that she admits she became “pretty inspired.” Not long after, she raced a low-key 50k that included laps along the bike path in Santa Monica. She then took the plunge and registered for the 2013 North Face Endurance Challenge 50-miler (TNF) in San Francisco.

“I struggled with anemia after TNF, so I just went back to shorter road races and marathon training. It took another three years to get back into the ultra scene and when I finally did, I had a much better experience (placing third at the Whoos in El Moro 50k in 2016), but for some reason, it still didn’t stick.”

An uninspired training cycle and subsequent race in March 2017 at the Tokyo Marathon led to more time off for Kate. However, Kate was energized and ready to start exploring the vast Angeles National Forest trails out her back door at the end of the year which led to an amazing training block. She started off 2018 with her third ultra and a solid second place finish at the Sean O’Brien 50k (SOB) in the Malibu mountains.

That crisp race morning in early February was a turning point for Kate. “That was it,” she said, “It all started to click. I felt alive on the trails, and I could breathe deeper and more contently out there. The leg burn of climbing mountains is my favorite challenge, and dancing back down them is a return to finding fluidity and the gracefulness that I truly enjoy.” 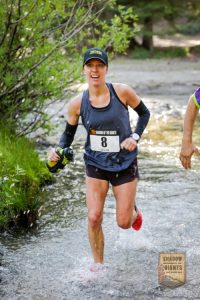 It helped to have the support of her new team based in nearby Pasadena, Run With Us. “It’s a strong community on so many levels. We wake up at 4 a.m. on a Saturday to volunteer at an aid station. We’ll get out there to train with someone for their race just because it’s nice to have buddies along for the ride. We’ll even fly across the country to pace a friend for their first 100-miler. When friends have a bad day, we’re there to lift their spirits. I’ve experienced a level of selflessness from my ultrarunning peers that I didn’t even know existed.”

Kate says the sense of team is incredible and reminds her a lot of her collegiate softball days.  “I’ve been on many teams, but the support I feel with Run With Us has trumped them all.”

Four months after SOB, she raced the Shadow of the Giants 50k. “The entire race was incredible and I found myself in the lead after I hit the last aid station. I was cruising down the hill and there was Ann Trason cheering me on! My adrenaline spiked after that. Actually, it’s still spiked from that moment.”

Kate described a feeling of floating over the trails at breakneck speed, “If I’ve ever been in the zone during a race, it was those last few miles.” Just talking about the race makes her heart pound, and rightfully so. She took the win, finishing fifth overall that day in the third fastest female time ever on the course.

Kate has maintained that flow state over the last 12 months, winning her first 100k at the end of 2018, a 50-miler in March of this year and her first 100-miler, the Midstate Massive in Charlton, Massachusetts, in October. 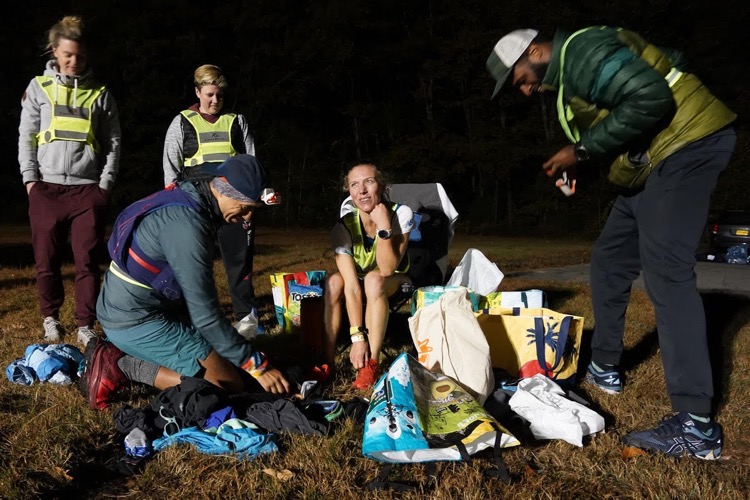 Her goals for the next few years are very clear, “How fast and how far can I go? I have no idea what I am capable of, so I’m searching.”

Admittedly, she struggles with planning far in advance, often a necessity for the more competitive and popular ultras around the country. “I tend to be more spontaneous than most of these races allow me to be, so I’m still working out what I’m going to do in 2020. Definitely the Monument Valley 50k or 50-mile,” Kate says with her trademark ear-to-ear smile.

Paramount to any race day achievements for Kate is to keep her running lighthearted and adventurous. “There are a lot of longer trails I want to start running on without a clock and a race bib next year. I have plans to do a little more fastpacking too, but the most important part of all of this is making sure it’s always fun.”

Kate says that my first book inspired her, well she inspired me after seeing her tough it out at The North Face Endurance Challenge 50 in the headlands back in 2013. Her grit and positive attitude is uplifting to all and your article did a nice job of highlighting that spirit. Bravo.

Well this all has made my day! Thanks for these kind words, Dean – and for inspiring me to get out there! I’ve really found myself because of it! I’ll be off bubbling away now!

Kate was a big motivator for me at the Ray Miller 50 last weekend. Cheering and positive words after the toughest segment of the race. Their aid station got me in and out of there in a jiffy!

James, I was so stoked to see you out there! Glad we helped ya at the aid station, hope climbing back out wasn’t too bad! Congrats on (I think?) your first 50! (If I got that wrong, replace first with however many you’ve done). Thanks for all these kind words, I feel all warm and fuzzy inside!

Kate rocks! Glad to see this showcase her amazing running. Well deserved for a great person.