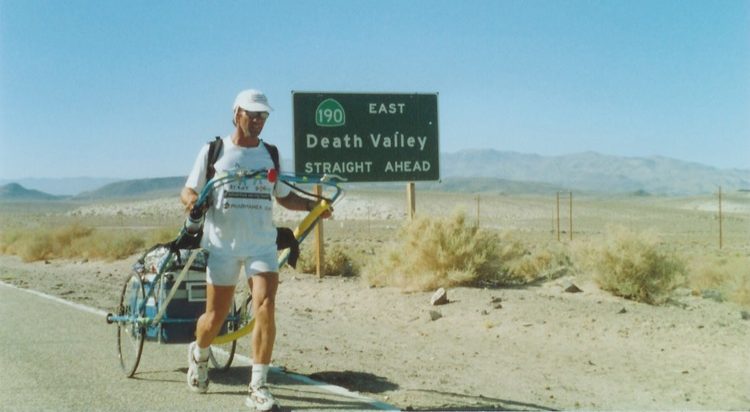 Thirty years ago, at age 39, endurance athlete Marshall Ulrich completed his first 146-mile crossing from Badwater Basin (282 feet below sea level) to the summit of Mount Whitney (14,505 feet). The journey across Death Valley to the Whitney Portal traverses three mountain ranges, with 14,600 feet of cumulative vertical ascent, is no small feat.

At 6 a.m. on Monday, August 24, 69-year-old Ulrich began his journey across the desert to climb the highest mountain in the contiguous U.S. for his 30th crossing of Death Valley and his 27th summit of Mount Whitney. On August 16, the temperature in Death Valley soared to 130 degrees, possibly ranking among the top three highest temperatures ever measured on the planet.

Dr. Bob Haugh will follow Ulrich on his journey, and if the name sounds familiar, it’s because Ulrich and Dr. Bob were both featured on World’s Toughest Race: Eco-Challenge Fiji, which is currently airing on Amazon Prime. Ulrich and his team, Stray Dogs, were one of 66 teams from around the world who competed in the Eco-Challenge Fiji in 2019. They were the oldest and most experienced eco-challenge competitors on the course. Ulrich noted during the show that he started running ultras at age 42, and said that his goal was the same as it was decades back: “to squeeze everything out of life.” 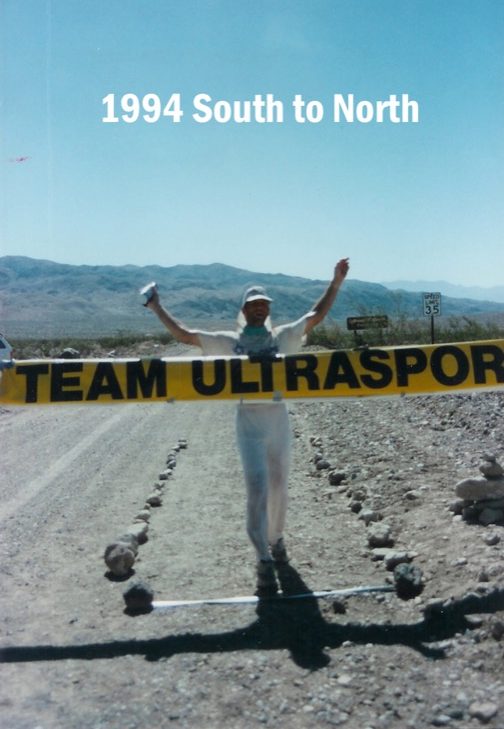 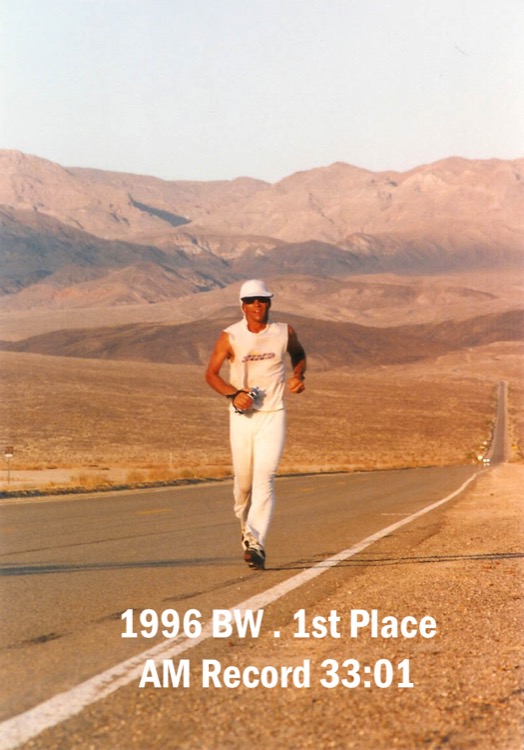 The day I spoke with Ulrich, he was planning on going out on the trails with Mark Macy, one of his former Stray Dog teammates who is now suffering from early-onset Alzheimer’s. Macy previously joined Ulrich for a total of eight Eco-Challenge races. “Mark is still Mark,” Ulrich said, with emotion in his voice. He laughed and went on to say, “Dr. Bob is the king of suffering. He likes to get the crap beat out of him.”

If you’re wondering what 29 crossings of Death Valley look like, here’s a glimpse of what Ulrich has accomplished in the desert to date: 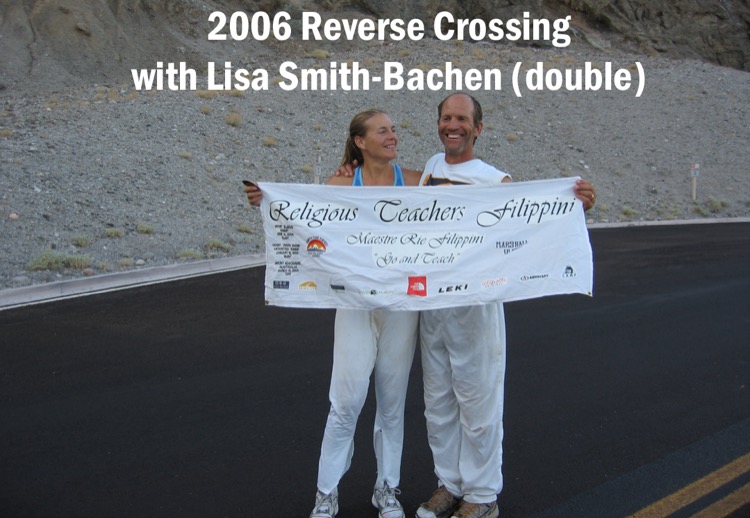 What’s the appeal to do yet another Badwater crossing? For Ulrich, it’s about goals and what they represent – an opportunity to keep going and keep pushing forward. He would like to “eek out one more.” 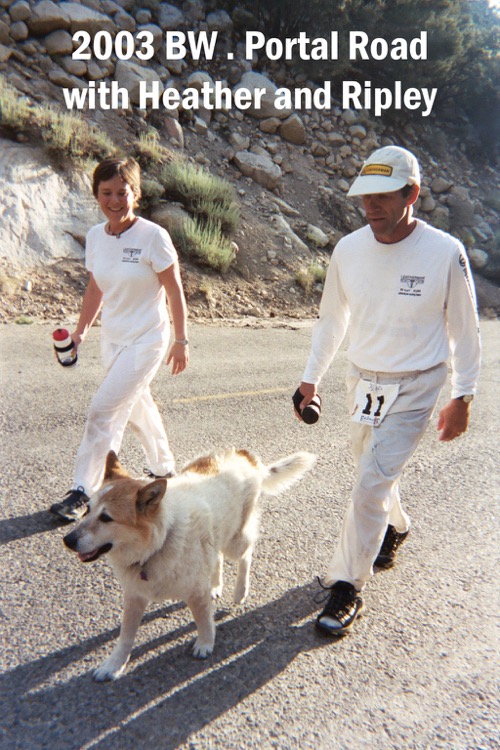 “I miss racing so much. I want to make peace with the restless urge. I need the push.” He is looking forward to sharing the journey with his fellow Stray Dog teammate, Dr. Bob. “The name Stray Dogs says it all – we’re just wandering around, looking for our next meal.” The two endurance athletes don’t have a time goal for this journey, “being out there is enough.” For Ulrich, Death Valley is a sacred place – it’s home – and it enables him to experience profound serenity and solitude. In terms of preparation, Ulrich has been spending time in the sauna, climbing 14er’s in Colorado, and clocking 6-7-hour sessions on the trails for the last 6-8 weeks. Ulrich’s wife, Heather, will be crewing her husband and Dr. Bob across the desert.

Weeks back, ultrarunner Harvey Lewis set out to break Ulrich’s 1991 record of running Badwater 146 in 33 hours and 54 minutes. Over the years, famous names in ultrarunning – both men and women –attempted to break Ulrich’s record without success. Throughout Lewis’s attempt, Ulrich cheered him on via social media and called him on the phone to encourage him. For those of us watching the event unfold, it was a reminder of Ulrich’s commitment to the ultrarunning community and his impressive legacy, not to mention his ability to pass the torch he has long held with grace and humility. Lewis ultimately broke Ulrich’s record by 22 minutes, finishing the crossing in 33 hours and 32 minutes.

Ulrich is not immune to getting old. Like everyone else, he is in the process of coming to grips with it. Along the way, he aims to keep going on the roads, trails and mountains as long as he can, because it’s what makes him feel alive. What’s next for him? He laughed, “Eco-Challenge Patagonia 2021.” After completing 130 ultramarathons which averaged over 125 miles each, competing in 17 expedition-length adventure races and climbing the Seven Summits all on his first attempt, Ulrich is not done.

A wonderful piece, Jody Weiss. I was privileged to join Marshall and the Stray Dogs crew for this event from mile 73 to Whitney Portal. My trip to Death Valley to witness Marshall making history was spontaneous. And other than meeting Marshall briefly at the 2018 Badwater 135, I was not yet acquainted directly with Ben Jones, Heather Ulrich, Dr. Bob or any of the wonderful people who stopped to offer moral support along the way. When I offered to crew to the finish, I was welcomed with open arms and treated from the outset with kindness and appreciation as a full-fledged member of the crew the entire journey. It was an amazing opportunity to help Marshall and spend time with such fun and gracious people and I’m grateful for it.

Marshall…..keep it up !
I’ve been working on completing the arizona trail. Sooo beautiful.
Miss you.

He’s “the dude”, an inspiration.