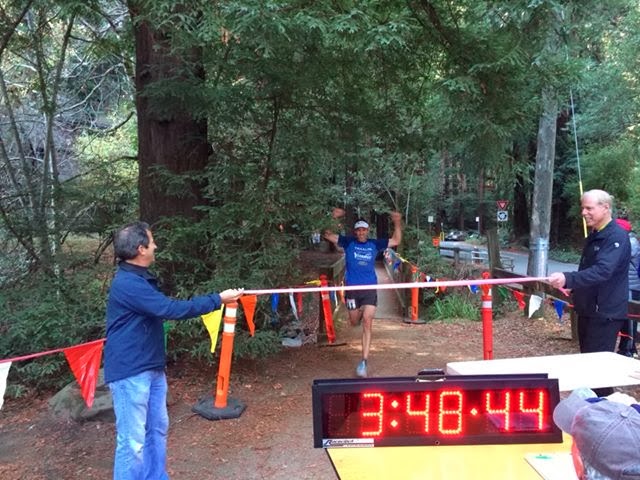 I was registered for TNF 50 for the past two months, and planned on peaking somewhat for it. To maybe get on the podium? No, these legs have seen those days on TNF 50 but not anymore given the speed out there these days. I just wanted to race my best against the best.  But ten days out from it I found the upcoming weekend in which might score a hall pass, and thought why not run the Quad Dipsea and see what happens? I can get sub four hours on it easy, and then try to recover for TNF 50. A true test of the “coming in rested theory” would be how deep that rest really goes in able to run back to back ultras. This has failed this past summer with proximal 100 milers, but this was a 28 miler and 50 miler on week apart. I had no solid evidence, but thought I had it in me to run well at both. A last minute entry to the Quad and some flight miles and I was there, with a scant hope at even trying for Leor Pantilat’s 3:48:58 course record.

The Legends (John Medinger and John Catts) and me

But here first of all, my splits: I guess going with lower expectations and pressure can lead to faster overall times. http://www.run100s.com/splits/13qd.htm

All this said, the last lap, the slowest, running back from Stinson Beach to Mill Valley hurt like hell. That is what running in fear will do to you, make you run your best. Or your worst.  My fear coming out of Stinson at the turnaround was that my time was almost exactly what the course record was when Leor set it two years ago..and I had to do this last lap on a harder course; each lap is 45 seconds slower than the old course due to Dipsea trail repairs.  Crossing over the Panoramic highway a few minutes after turning around at Stinson, knowing I was chasing Leor’s shadow, I promised to run every step back to Mill Valley, and make running faster than hiking is difficult on steep pitches. My lungs burned on that last return trip, both up and down the hills, until finally with about 100 foot vert before Windy Gap I gave in and power hiked the last steps. It didn’t matter at that point, as I was still exactly on course record time. Two of the runners I passed there who were not yet finishing their second lap said Leor passed them at the same point when he set the record. Ouch. I pushed a tad harder over Windy Gap and had to use my descent strength to get close to Leor.

At the start, I knew to run close to even splits and then see what happens. In the past at other West Coast race to beat Carl Anderson’s and Erik Skaggs’ times took some serious effort, and Leor has some times out there that are serious too. Plus I’d never run four Dipsea laps consecutively. Training the months prior had been steady, focused primarily on hills and quality runs every other day, and easy stuff most other days, for the past three months. No long runs though.  But I wasn’t afraid in training to run back to back hard 2 hours days and a couple double workout days in the local peaks. But the best thing working for me may have been the Tour De Flatirons in October and November, the perennial running and climbing race series me and my nutty climbing friends put on. These are seriously hard 30 minute or so races that we’d hold in the fall; start at a trailhead, sprint like hell up to a rock face, solo it hard, downclimb or rappel off the back, and bust it back to the trailhead. Very underground, very not-so-smiled-upon by Johnny Law Ranger at the Chatauqua ranger cottage. Basically like running a hard 10K, with a chance of dying thrown in. Too much fun and makes you spit blood

Brett Rivers from theSFRC was running this year, the prior winner and guy who always makes one feel good. I call him “the Mayor” because he truly is just that to the Marin running community. He penned the “Dirty Double” moniker which I hope sticks. The other fellas at Quad I didn’t really know personally but their names were well known and a solid field. My good friends Tim and Diana Fitzpatrick (Diana WON the single Dipsea race this past summer; I much harder feat to accomplish) were my crew, handing water and Vitargo at Cardiac (the top of the climbs) and at Stinson Beach turnaround.  This is the perfect crewing race; stand in one place and your runner comes by you four times.

I knew I’d be racing the clock primarily, but thought Brett would be close most of the race. The gun went off and up the steps we went. Power running and hiking hills was the name of the game on the first and second laps, with running hills taking over the second half. Pushing the run pace on flats and downhills otherwise. The Dipsea course is tricky to the unknowing, as there are two decent bumps to run over, about 2300 vertical per lap. You have to knw the course then it gets easier every time. Into Stinson I knew I had a cushion, with a time of 55:30. On the 1st  turnaround trip back to Mill Valley there were legions of runners coming down.. tough to negotiate as they hadn’t expected the lead runner me just yet. Kind of like running the Pikes Peak marathon descent, and inevitably there are some minor brush backs against each other on the narrow trail. This is a steep climb back up and it is over quickly to get to Cardiac Hill, the aid at the top of the climb below Pan Toll. I felt fine on that first return until Muir Woods (Nat monument) then felt a bit of a drag coming up the trail paralleling the Muir Woods road. I misread my watch in glancing and thought I was 10 minutes slower than I actually was.. over Windy Gap I was told I was at 1:45 total (and not 1:55 as I thought) I was psyched and hit the 800 foot staired fun downhill to the start/finish, which I loved. I’d been told I’d get all quad cramped up, but I didn’t feel a thing and hit the turn in 1:52:39. All I had to do was run the same thing and I’d beat the record by five minutes..no small feat but my reserves felt fine just then.

The third lap was the easiest of the whole race. The field was spread out, I felt no pressure, and I thoroughly was able to enjoy the run. I focused on downing Vitargo and hydration and staying ahead in fuels as the temps climbed close to seventy in the sun. The downhills felt so smooth in my Bondi B, with zero cramping and saved energy for repeated hills, and no hot spots in my Injinji socks. It was cool to be able to see more folks I knew on the course and say hey to runners I’d seen on the first half. There were some good friends out there running that I’d gotten to know over my time in Marin in grad school, to see them and how their efforts were playing out. There is no race like the Quad in the US like this where this cool social aspect exists. The women’s run was going to be close, and Luann Park was close to taking the win in her race, but on the return it seemed Ariane Buser was pulling ahead, and would eventually win.

I ran shirtless as it was warm now, and left it at Cardiac to grab on the last lap back. At Stinson, my split was right on where it needed to be to beat Leor’s time, but again my course was a touch harder so I had to leave it all out there. The climb again flew by back to Cardiac, and I was happy to see Brett Rivers with a solid hold on second place. My stomach was rock solid with no muscle cramping. Just then, the only variable keeping me from a win and maybe course record was my mind.

Over Windy Gap, I had seconds to spare and thought only my downhill would get Leor’s time, so I pushed it and risked a fall on the Dipsea steps, which would be really bad, but all the runners and hikers coming up and down the steps were kind and let me pass as needed. (Thank you!) Into the finish I was happy to see the timer just where it needed to be..3:48:45.  Really my time won’t last though..the sport is evolving so fast that someone will run 3:38 within five years.

Again, thanks to John Catts and John Medinger for holding a gem of a race..wish I’d come out sooner. The win was nice but it is the Marin and Tamalpa community and legendary trail that make this race legendary. Jed Tukman made thousands of delicious Firetrail’s pizza’s, and I ate 500 of them. Thanks Jed!

Article reposted with permission. Original can be found at Dave’s personal blog.