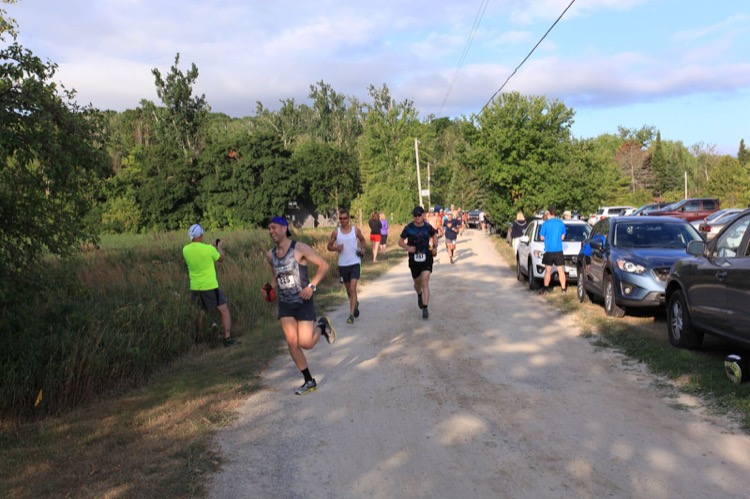 The 10th Creemore Vertical Challenge is now in the books and based on dialogue with the runners I would guess that most enjoyed the race. Is the course tougher? Yes. Regulars at the race described in detail how the new hill, the “Pitch” was a rude awakening, coming within the first 5K of the course. Oh, by the way, it starts with a P, not a B…

Even the weather cooperated, with cool temperatures in the morning. I noted 16°C on top of the escarpment at 6:30 a.m., shortly after the 75K start. The weather was not ideal, as the thermometer crept up to 28°C by the middle of the afternoon, but far better than the 32°C I experienced the day before while slamming a tooling bar into the rock-hard ground while attempting to install the signs!

Zoa Birdsong charging up one of many hills on the Creemore course. Photo: Dennis Campbell

I hope that I echo the thoughts of the award- and spot-prize winners, but Lee Anne’s pottery has improved dramatically this year. New glazes and more time spent at the wheel has elevated her craft to the point where the mugs and bowls are almost works of art. I mention this because the other prize component is maple syrup, which is appreciated by the winners, but I see the pottery as a tangible attraction for the podium runners. Many thanks, dear!

The Creemore Vertical Challenge has never been a two-person show. Yes, Lee Anne spends 200–300 hours as her contribution, which includes pottery, food purchases and taking care of the volunteers. I spend an inordinate amount of time making the finishing medals, maple syrup and clearing trails. Recently I have questioned the sanity of a race director (in itself almost a full time job) who doesn’t farm out the prizes, medals and the “hard” work. I spent part of two months clearing trails after the ice storm. I’m an idiot!

But it is the volunteers that allow the race to proceed. The 34 people who sat for hours at marshal stations, fed, watered and gave encouragement to the runners and kept the race running (wow, what a great pun!) are the true heroes. They receive many thanks from the runners, but they seldom are in the race spotlight, gaining well deserved praise. Many thanks to all of you for your efforts!

I would like to mention a few items that happened at the 2016 CVC that many people probably are not aware of. In June this year I guided a good friend, Elizabeth Hurdman, who is 95% blind, at the Sri Chinmoy 6 Hour in Kingston. I was very nervous about helping someone with so little sight navigate the course. Although mostly paved, it had turns, bumps and gravel sections. But Liz has a wonderfully optimistic outlook and loves to run. The result? We had a gas and running on a mostly paved surface was not a problem. Liz signed up for the Creemore 25K. Hello? Another good friend, Sharon Zelinski, would be her guide. Sharon had been experiencing foot problems, possibly plantar fasciitis, for over a year. She was having trouble running more than 12K. I know, you’re thinking “what could possibly go wrong?” Nothing did go wrong and Liz completed the 25K race in a respectable time of 4:18. So, those of you who ran the course and considered it (as I do) a very tough challenge, imagine doing so with virtually no vision!

Another good friend and neighbor, Peter Taylor, is an experienced ultra runner. This would be Peter’s first attempt at the CVC, as Peter has almost always had a destination race when the Creemore race was on. Sinister Seven, Fat Dog, Canadian Death Race… This year, Peter was finally able to run Creemore. The result? Disqualification. I think the problem was that Peter ‘knows’ the area too well. While in 4th place in the 50K, Peter took a wrong turn and ran for almost 5K before realizing he was not going in the proper direction. He was on the course, but running it in the reverse direction. I feel for Peter. I know we have all gone off course, but it still sucks. Mind you, I can’t wait to chat with Peter and mention that yeah, he has done well at Sinister Seven and Fat Dog, but how did he fare at a really tough race, such as Creemore? Can’t wait!

My boss Csaba Melnyak and my son-in-law Daryl Klein walked the 25K course. In fact, they walked 29K, as they went off-course for a few kilometers. Csaba (pronounced Chuba) used to walk 100K in about 24 hours back in Hungary and missed doing so. I suggested he walk the Creemore course. I believe they had fun and also found it a challenge.

Agnes and Saj Moktan are friends who share our passion for running. During a training run of the CVC course a few weeks back, they casually mentioned that they would like to bring samosa to the race. Then they mentioned they would bring 300 samosa! Seriously? I had a couple at the Seaton Soaker race and they were delectable. I offered to pay (well, the race would pay) but they politely declined. So, if you are one of the 200+ people that enjoyed a samosa, please thank the Moktans! They also offered up the services of their family and friends, a total of four volunteers. Many thanks to the entire Moktan clan!

Although busy from 5:00 a.m. until almost 7:00 p.m., I enjoyed the rare moments when I could stop and chat with a friend or one of the runners new to the Creemore experience. For me, that is possibly the best part of holding a race. I only wish I had more than a few moments to chat with the 100 or so people during the day.

Runners found the course tough, the pizza and samosa savoury, and the Creemore Springs beer a well-deserved reward after their epic battle with the Creemore hills! Last year three kegs sufficed for the race. This year after three kegs ran out, I had to quickly buy two more small kegs. Trust me, you don’t want to run out before the 75K runners finish. These are tough people!

The day after the race I was able to clean up almost everything, mainly because we had the luxury of several volunteers on clean-up duty after the race. Yes, they picked up dirty watermelon rinds the runners tossed to the side of the road, used gels, etc. Lee Anne also helped pull flags from a few trails, allowing me to start dismantling tents and tarps early.

Many thanks to all who participated in the event. Runners from all over Ontario and beyond, friends, family and neighbours. The event is grand, but the people are what make it worthwhile. More race photos can be viewed on my Flickr page. Dig Deep!

Thanks for the report. Sounds like a fantastic race!