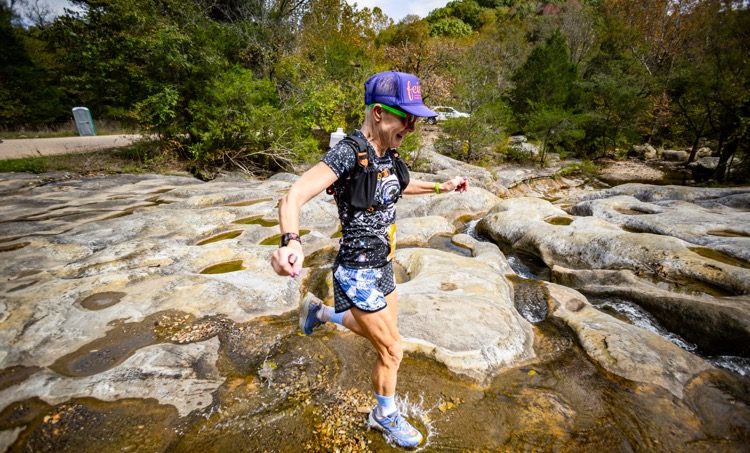 Ruthie Loffi hung up her bib at mile 50 of the Rocky Raccoon 100 in 2018. Amid tears and disappointment, Ruthie had an epiphany about a nagging worry that had consumed her most of her life. “Growing up and as an adult, I had a great fear of failure in everything I did. Even with encouragement and support from others, I was not convinced that I was capable of anything. It took me until I was 55 years old and taking on my first 100-miler at Rocky Raccoon to realize that believing in myself did not depend upon whether I failed at something.” It took this DNF (which Ruthie loves to refer to as Did Not Fail) to realize that not trying was far worse than failure itself.

Ruthie grew up the oldest of three girls in a small village of Hemsby, a seaside resort on the east coast of England. Her dad was a devoted farmer and her Mum was a homemaker turned pharmacist. Her parents instilled in her a love for the great outdoors and she recalls, “being outside gave me an appreciation for nature and the love of playtime.”

In the late 80s, she married her first husband and his job had them moving every two years, to six different countries around the world. During this time, Ruthie rediscovered running through an unusual club, the Hash House Harriers. The club originates back to 1938, when a group of British officers met up for weekly Monday runs to rid themselves of the excess of the previous weekend. “My first exposure to this crazy bunch of fun people was in Mumbai. It was a lifeline, as it helped me to connect through my ever-present love of running. I was involved with “hashing” intermittently depending on where we lived, and particularly in Nigeria where we would find ourselves tromping around the bush, wading through swamps, and making sure we didn’t step on a blackmamba!” 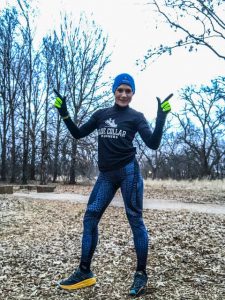 In 1995, Ruthie tackled her first marathon in Houston, Texas. What made the day so memorable, was that her parents had flown in from the UK to support her. During the race, she shared a special moment with her dad when he broke into a jog alongside of her. “I knew that it had to have been a challenge for him, having recently had hip surgery. In that moment, I felt his love and how proud he was of me. That memory has carried me through many other running moments.”

Nearly 20 years later, a chance encounter dramatically changed the trajectory of her life. It was 2013, and she had just finished a 10-mile run and was feeling energized as she walked into a local bagel shop. She started chatting with the guy behind the counter, Bill Ford, and their mutual love of running. Bill casually mentioned to Ruthie that he ran 100-milers. “I didn’t know that such a thing existed and was even humanly possible. This immediately piqued my curiosity and that was the start of my journey into ultrarunning. I’m forever grateful to Bill for sharing his passion of ultrarunning with me.” Since that fortuitous conversation, Ruthie has not one, but three 100-mile finishes to her credit.

Ruthie enjoys spending time with her second husband, Jon, and works at Oklahoma State University. “I love whatI do – it is different every day and I adore working with students as they are positive, excited about life and full of ideas.” She’s also a RRCA certified coach, spreading her positivity and passion to her athletes.

This year, Ruthie is poised to continue to grow as an ultrarunner. She has numerous races on her calendar, hoping to add to the 17 ultras already under her belt. For her, it’s so much more than running. “Ultrarunning has also taught me humility. It strips away all the veneers which we start with at mile one, and lays everything bare at some point during the miles and hours endured. You will truly know who you are when you have fought mentally and physically through the highs and lows. It is so liberating.”

When I circled back to what ultrarunning has given her, she pauses. “Ultrarunning has taught me that I am capable of so much more than I could possibly imagine. As an ultrarunner, you have likely heard the response, “I could never do that,” when asked about your latest foray into distance running. In all aspects of my life, I try to apply the opposite response and imagine how I can challenge myself more. The outcome is so different if your mind is free.”

I love this. Reading about such cool people inspires me and gives me hope that I can someday achieve my running goals. Thanks for your articles BCRs.

Daphne….thanks for reading! We love following your running adventures and sharing miles with you! Miss you! Team BCR!!
xo G&K

Inspirational, love the Did Not Fail……😍

Paul…it’s a great mantra for sure! Happy running…. G&K