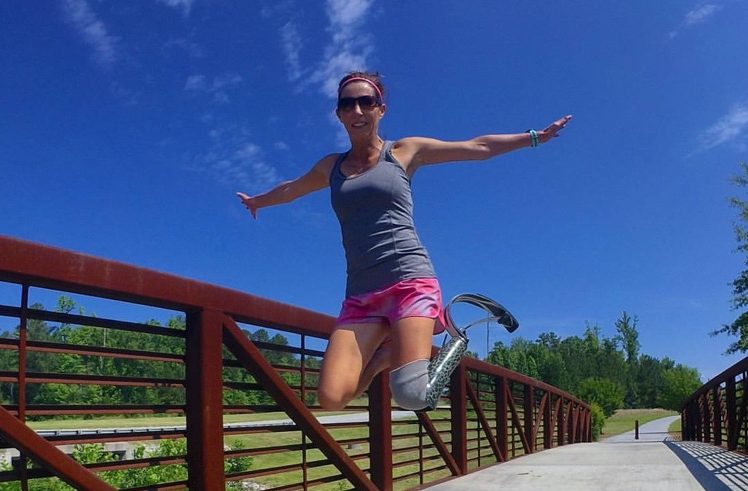 It was December 2016 in Durham, North Carolina and Jacky Hunt-Broersma was picking up a packet for her first official race. She had only been running for three months, but for many years she had cheered for her husband, Edwin, from the sidelines and a thought crept into her mind. “I had this romantic idea that we could run together and had no clue about pace.” Initially, she had signed up for the 10k distance, but made a last-minute decision to switch to the half-marathon. She laughed, as she recalled that day, “That’s pretty much how I do things, I just kind of jump into it and see what happens.”

In 2001, Jacky discovered a lump on her leg. It was the size of a golf ball and popped out overnight. A visit to her doctor, followed by a biopsy revealed that it was cancer. The tumor was attached to the nerve of her foot, which meant there was only one logical treatment option. One week after her diagnosis, she was in surgery having her leg amputated. “You go into survival mode.” What she found was a new strength. Just four weeks after her surgery, she was back to work and determined to get her life back to normal. Acceptance took time, as she struggled with her body image and her new reality. “Looking back now, it sounds really weird but I’m kind of glad it happened. It puts life in perspective, you appreciate things more. I just think I’m a better person because of what happened.” 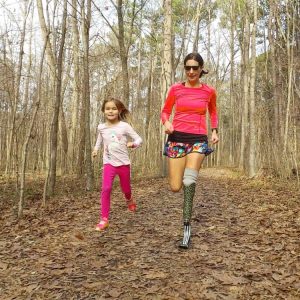 Jacky not only survived cancer, but she has thrived over the past 17 years. A few years after her diagnosis, she moved with Edwin to the United Kingdom where they welcomed a daughter and a son into their lives. In 2015, when Edwin was offered a position in North Carolina, they jumped at the chance to move to the States. Two years later, in Chicago, she found herself at the starting line of her first marathon. Being registered as an amputee, she was allowed to have a pacer and Edwin was happy to fill that role. “Chicago was our first weekend away, since we’d had kids.” She still gets goosebumps thinking it. “The crowd was absolutely phenomenal. I’ve never experienced anything like it before.”

After a successful marathon performance in Chicago, she turned her focus to a new challenge: trail running. With her typical enthusiasm, she signed up for the Triple Lakes Ultra in Greensboro, NC. Her lack of trail racing experience didn’t hold her back. “I was loving being out on the trails and hadn’t run a trail race yet, so why not go from 0 to 40 miles.” Another huge challenge presented itself that day. Heavy rainfall had made the trails muddy and slick, and Jacky’s blade had road tread. “I had absolutely zero grip, so with the downhills I had to bum-shuffle.” Soon after, she was introduced to a person who helped her in a big way, “Luckily, I’ve got this amazing prosthetist who actually customized my tread.” He deconstructed a trail shoe, and transplanted the tread onto her blade, which gave her more freedom to tackle the trails.

She speaks with tremendous gratitude about her support team, which includes her physical therapists, doctors and prosthetists, “I feel so incredibly grateful because they’ve been absolutely amazing. They think I’m totally nuts, but they work so hard to keep me moving and running these long distances.” She is also mindful about the example she is setting for her children. “Having kids, you make everything really positive and show them that you can be strong.” 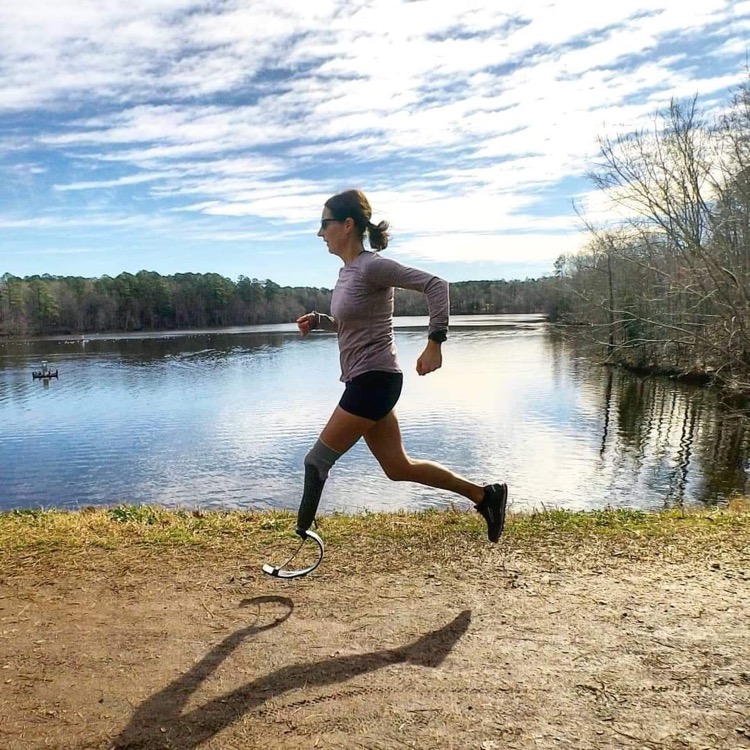 One of her proudest running achievements was completing a 50-mile race at Umstead. “I’m still riding the high of it!” She raved about the friendly atmosphere of the event. Her favorite part of day was running with Edwin, “It just made it so much more fun and special.”

Jacky’s 2019 schedule is filling up quickly, as she is signed up for several ultras. She is also competing in the TransRockies, a multi-day, point-to-point race in Colorado, that covers 60 miles over three days. She’s dreaming big in 2020, with the hopes of completing her first 100- miler, “I’m having the best time, and my body just has to keep up with me.”

Armed with a great attitude, a husband who inspired her to run far and loads of gratitude, she is clearly loving her path. “My heart is in ultrarunning and that’s just where I want to be.”

This story is so inspirational and proves what the human spirit is capable of. It’s also a major motivation that even the most severe obstacles can be overcome. Thanks for posting!

Thanks Jon for reading!! We’ve enjoyed sharing these incredible stories with URM.

Amazing story and an amazing superwoman I’d love to meet.

Thanks for reading Lisa! Jackie is quite the woman!!!

Hi Guy and Krista, It is so nice to read your writing. Very inspiring! I have seen an amputee who ran Western States, maybe Jackie can be the next one. I have come back to SF a few years ago. See you soon, Clem

Hi Clem!
So great to hear from you! We have been thoroughly enjoying writing these pieces about these incredible folks….everyone has a story to tell. Thanks so much for reading them and your support! Hope to see you on the trails again soon!!
~ Guy & Krista