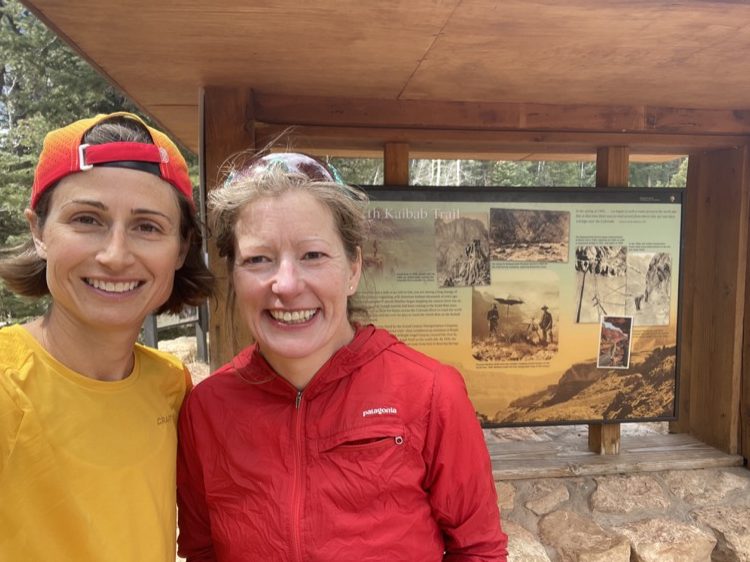 “Drop the bike!” screamed my husband, Jason, as he opened the RV door when a man began to ride off on one of our bikes at 6 a.m. near the Strip in Las Vegas. He promptly chased the thief on foot, wearing only his boxers. This was the first running event of my 40th birthday trip and luckily it ended well. Jason eventually caught up to the man, who surprisingly dismounted off the bike and walked away, and returned unscathed with a smile on his face. Superheroes really do only wear underwear. The second running event of my birthday trip, the one we actually planned, was a Grand Canyon R2R2R.

My friend, Helen Scotch joined me on this quest. She is a woman who does it all, including multiple Arrowhead 135 finishes, and many more accolades that deserve their own article. In April, the North Rim is still closed, so the total mileage would be roughly 42 miles and 11,000 feet of elevation gain using the South Kaibab to North Rim to South Kaibab route. This is the shortest way to complete the R2R2R, and we didn’t feel that doing the extra miles using the Bright Angel Trail was necessary.

Once my family arrived at the Grand Canyon in our RV, the wind was howling, but I didn’t feel deterred. Helen flew in to meet us the night before, and we spent a few hours talking about logistics, playing card games with my kids, and doing our best to fall asleep before an early wake-up call at 3:45 a.m. We needed to be on the trail by 4:30 a.m. to beat the mule train. I also learned that Helen had never seen the Grand Canyon in person, so when we started our run, I couldn’t get over the fact that she was running into this unknown dark abyss. This was also my first trail run in the dark which made the sunrise even more special for us. It was like a veil being lifted off a beautiful piece of earth. 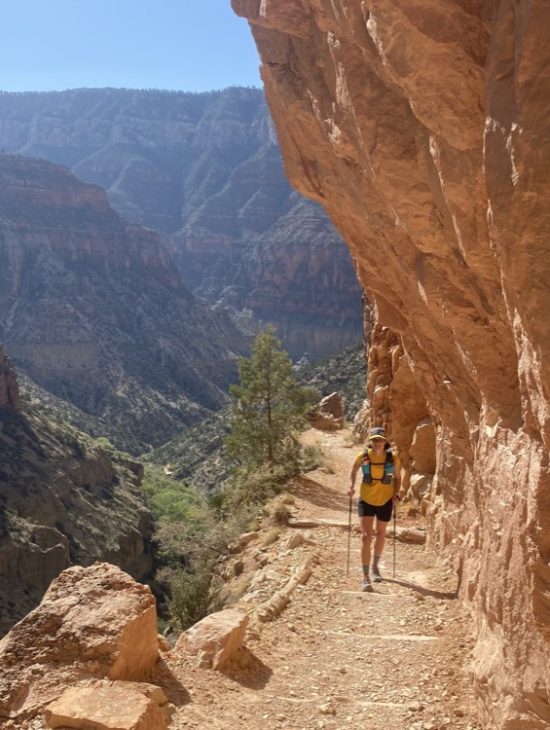 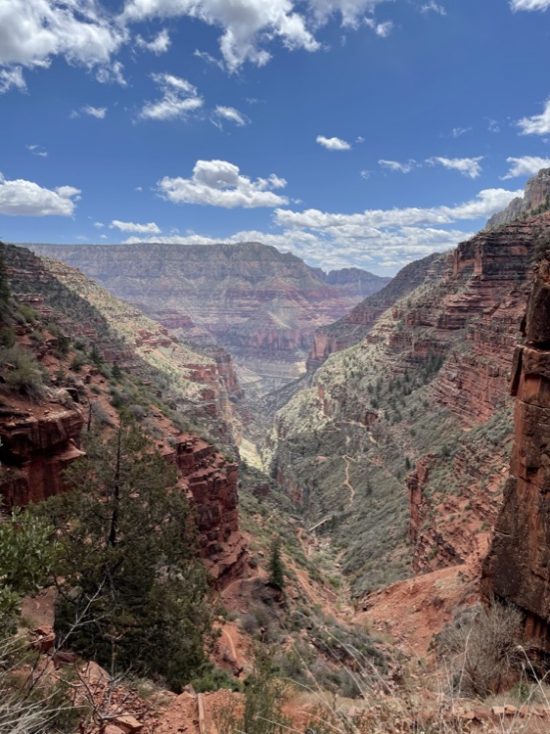 Looking back at our climb on North Rim.
Photo: Courtney Drewsen

We ran under the stars for a short hour before the sun began to rise. Our first water refill was at Phantom Ranch and it was entertaining to see the campers waking up and getting coffee at the canteen as we made our way through. We then followed the creek towards the North Rim. That section of the trail had a slight incline but was runnable and we caught up with two guys who were also doing the R2R2R but from the Bright Angel Trail. We chatted with them and continued to see them throughout the day. Once we reached Manzanita Rest Area, we refilled our water reservoirs and began our first ascent to the top of the North Rim.

The top of North Rim only had a few sections of snow next to the trail. After a photo and quick snack, we began our descent before cooling off too much. The descent was fun and exhilarating after the long climb. My favorite stop was at Phantom Ranch on the way back. The heat was making me nauseous, and the legendary lemonade along with a bag of chips hit the spot. Thinking back to our climb to North Rim made me a little nervous for our trek to South Rim. I was a slower hiker than Helen and didn’t want to hold her back. Luckily, the climb out was manageable with clouds blocking the direct sun. 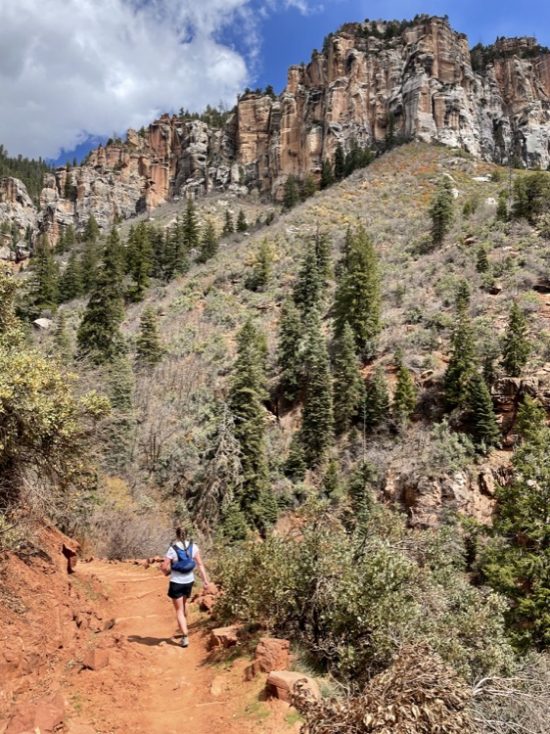 Helen on the descent from North Rim.
Photo: Courtney Drewsen 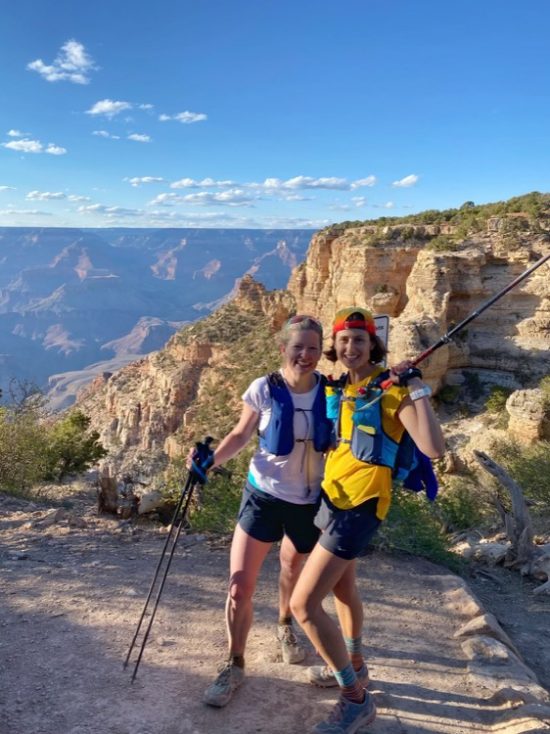 The entire day was incredible and everything I had hoped for, including epic views, challenging terrain and an unforgettable experience. We ran the runnable sections, hiked the steep inclines and took photos of waterfalls and selfies on cliff-edge trails to share with family and friends.

One of the reasons I picked this adventure was the need to feel that good pain. The kind you sign up for voluntarily just to make yourself feel more alive. Looking back, I have only one thing I would do differently: slow down. I don’t think I’ve ever wished that on a past run or race, but I would gladly do it again and take my time to soak in all the beauty of this incredible land we are fortunate to enjoy.

I did this with 4 friends years ago. Probably my favorite trail run experience though not an official event.

I did this a few years ago with a friend on a full moon. We had perfect weather, the full moon was so bright we barely needed head lamps. Absolutely one of my all time favorite runs!

A full moon run here would be amazing!

Love this beautiful memory you guys made together! And what a gift to have it all documented. Amazing Courtney!!

Congratulations! And good to hear Helen is still as fast and as strong as ever.

Love this! What a fun birthday adventure. Thanks for being brave – not only for the R2R2R but for your writing as well. You did both beautifully!