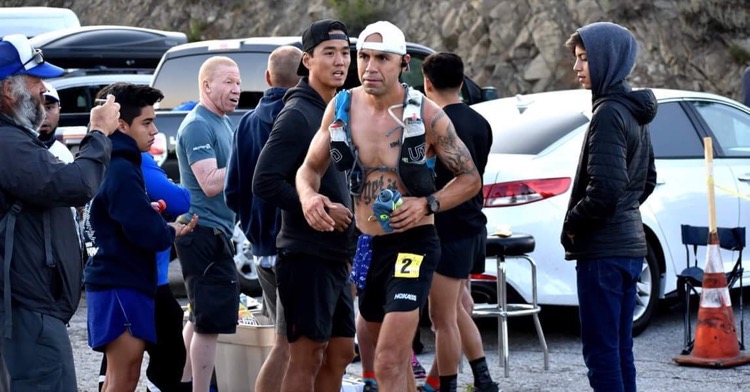 Angeles Crest 100: The Battle of the San Gabriel Mountains

We all learn from our mistakes. Last year’s Angeles Crest 100 was an experience I will never forget. I went out too fast early and wasted precious time at aid stations. Fourth place overall could have been much better. On the bright side, getting engaged with my beautiful girlfriend, Mayra, as I went down on one knee at the finish was prize-winning.

This year I made some adjustments. First, I had former AC100 champion, Tom Nielsen as coach. I needed a structured training and strategic plan instead of my usual way of just winging it. My work as a full time Wildland Firefighter required mandatory overtime during summer. During training, I got up at 4 or 5 a.m. six days a week and spent five to seven hours every weekend in the mountains missing family time. I am so grateful for my fiancée Mayra for her support week after week. Her support and love made it all possible. Tom developed a 90-day training plan including nutrition needs, pushing the ascents, cruising the descents, medium pace trail runs, and mentally visualizing the race. On race day, I was ready to roll. 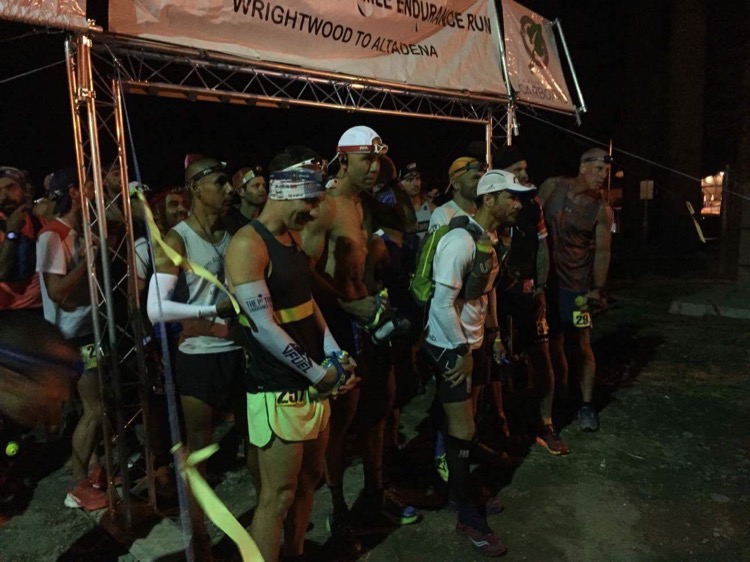 The race started with a strong climb up Acorn Trail just above Wrightwood. Powered by caffeine from my coffee, I worked that section at an honest pace, shuffling the runnable parts and power hiking the ascents. Upon reaching the first aid station at Inspiration Point at 9.3 miles, my crew put on my hydration pack and fed me with a bolio bread, turkey and avocado sandwich. I went on my way towards Vincent Gap and the dreaded climb to Baden Powell. 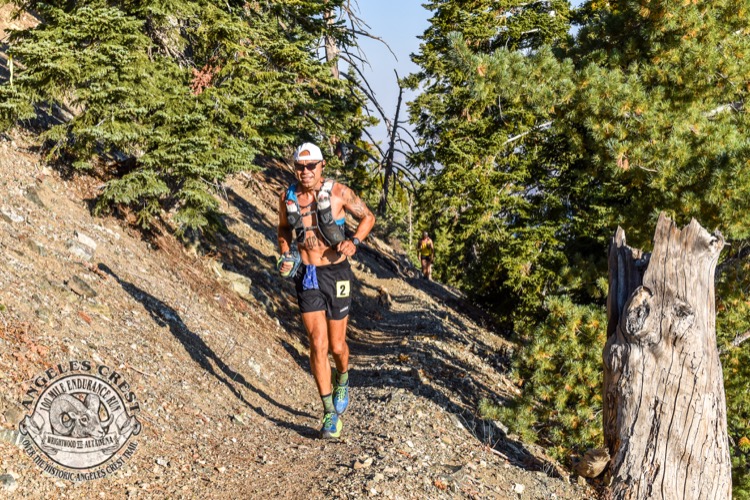 I started the climb in third place and power hiked every step of the way. A few runners passed me, but I remained unmoved. I kept telling myself to stick with the plan. Coach Tom’s words were going through my head: “Take it easy the first 25 miles. What you hike in the first 25 you’ll be able to run the last 25.” I got into Islip aid station Mile 25 in seventh place. I felt really good and told my crew I didn’t even feel like racing. The mercury will soon rise. Thus, a long sleeved shirt was necessary to protect myself from the sun.

Hitting Eagles Roost at Mile 29, I swapped bottles and cruised in to Cloudburst Summit on paved road. It wasn’t until Three Points at mile 37 that I spotted Branden Bollweg leaving the aid station. The frontrunners, Jorge Pacheco and Dominic Grossman, both former AC100 champs, were out of sight but I didn’t want to get excited. It was still way too early. Just keep going at an honest grind. I asked my crew if I was closing the gap or if they were pulling away. They reassured that I was looking real good and that they were right there.

I went on my way, passing Mount Hillyer and into Chilao aid stations where I picked up my first pacer, Victor Martinez at mile 44.88. The temperature was rising and relative humidity was dropping. I hit the downhill a little too strong into Shortcut Saddle. It was a dry heat with no breeze in the canyon. The two mile stretch into Shortcut was a huge relief to see my crew. Dominic and Jorge were sitting in the aid station while Branden checked in right after me. It wasn’t time to jump into the lead; I felt relaxed in my position. Being in front can sometimes be scary as you don’t run at your own pace. There were runners behind who were strong and patient racers: Mario Martinez, Rene Dorantes, and Moises Avelar. 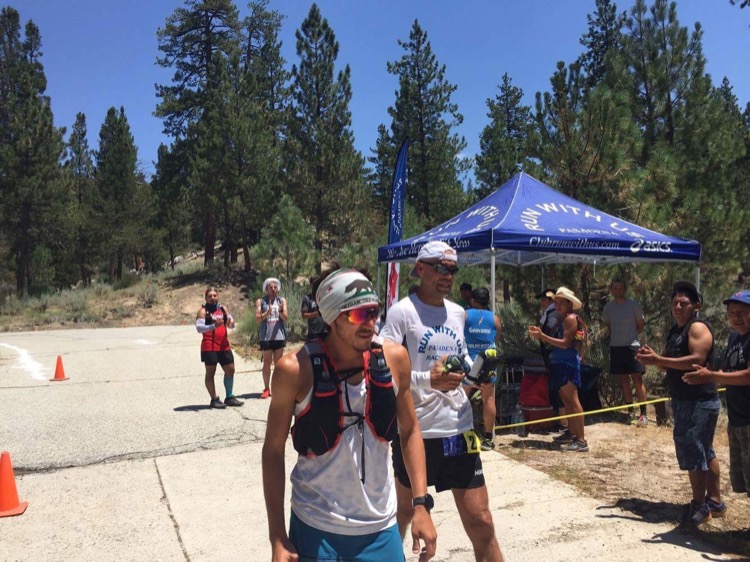 Shortcut to Redbox was a new technical section of the course. This section has definite scrappy conditions, but I ran it a few times during training in the same weather, so I knew what to expect on the long ascent to Redbox. The long descent from Redbox into West Fork and up Newcomb’s Pass would be a make-or-break section. I hit it smooth pushing on some parts and holding back on others. Redbox aid station was a key factor. I changed my shorts and shirt and got my legs massaged by Rich Lorton. He kept my quads and hamstrings loose all day. Before leaving Redbox, I talked to my next pacer, Jon Clark. Let’s do it! I wouldn’t see my crew for another 15 miles at Chantry Flats at mile 75. I couldn’t wait to get to Chantry. I’ve trained on that section numerous times. It’s my home turf.

Good news came upon arrival at Chantry Flats. I was 10-11 minutes out from Branden in first place, and 6-7 minutes behind Dominic. Coach Tom always told me that if I was 20-30 minutes from the leaders I was within striking distance. After getting my legs freshened up and soup from my crew, we changed pacers and were quickly out of Chantry Flats. We hiked up Upper Winter Creek to Mount Wilson Toll Road all in darkness. Dominic’s headlamps and his pacer were in sight.

Jon and I made our way down the Toll Road where we found Dominic at Idlehour aid station, mile 84. I quickly asked for Sarah’s delicious soup and was informed by volunteer friend Armand, that I was six minutes out from first place. We left right behind Dominic. I patiently waited for the sharp downhills to make my move. Dominic had tripped on the trail. After checking to make sure he was okay, Jon and I motored up towards Sam Merrill aid station and toward Branden, pushing strong. I was still 5-6 minutes behind Branden, with 10 miles left in the race. 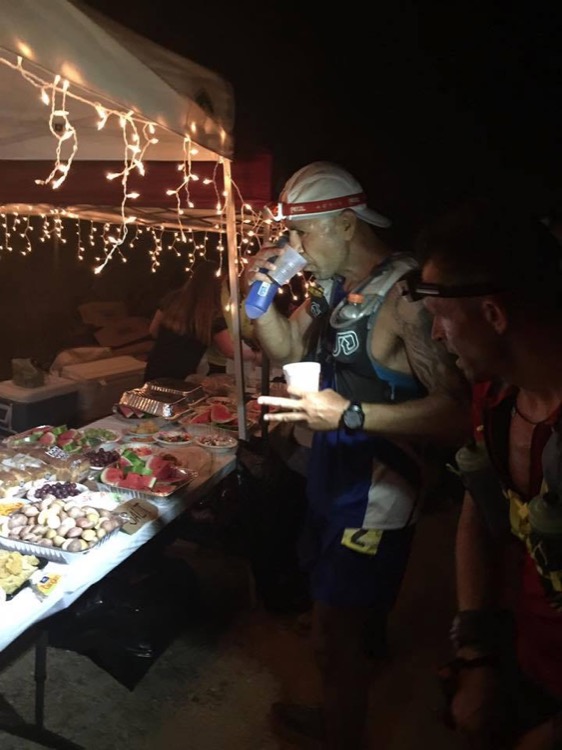 Getting some soup and ginger ale at Idlehour aid station, mile 84 with pacer Jon Clark. Jerry pulled into second place a few minutes after leaving the aid station.

This was it! I wanted to give it my very best and be able to look at my crew, pacers and coach and tell them I gave it my best. The Upper Sam Merrill is a technical downhill. I ran it as hard as I could without flying off the trail. Upon hitting Echo Mountain and starting on the trail towards Mount Lowe Road/Sunset Ridge Trail, I spotted Branden’s headlamp. That got me fired up. There was the Ram trophy right there in front of me – maybe three minutes away with seven miles remaining! I regrouped one more time, drank Ginger Ale that I carried and let loose.

Jumping and hitting the switchbacks hard, we started closing in on the headlamp. The trail reconnected to Mount Lowe Road where we came up behind Branden. I let him know to keep pushing and that he had a safe lead for second place. I let it rip into Millard Campground, mile 95. Jon and I both yelled, “Bib #2 in, Bib #2 out” and took off up Brown Mountain. We glanced back and saw Branden still rallying up. I kept the momentum going down the very technical El Prieto Trail right by my house. The race wasn’t over and there’s always that feeling that someone can come up on you. We hit Altadena Drive and about halfway down the block, it finally started to hit me that I was going to win. It was a real good feeling. Priceless!

All the hard work paid off. I couldn’t have done it on my own. I had an awesome and tireless crew comprised of Mayra as my crew chief, Rich, Juan, Leamon, Laura, Jennifer, Molly and my pacers, Victor and Jon. To Coach Tom Nielsen – we did it! Lastly, to the race directors, volunteers, aid stations, spectators, fellow race competitors and my generous sponsors, thank you! I can’t wait to come back for the 2018 “Battle of the San Gabes” AC 100! 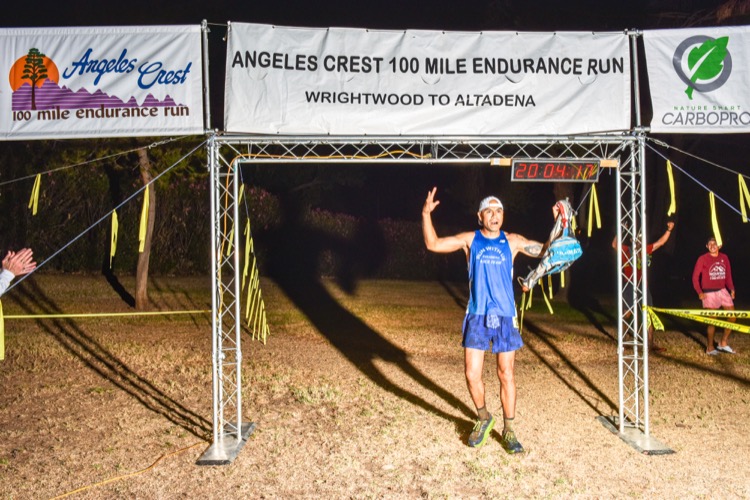 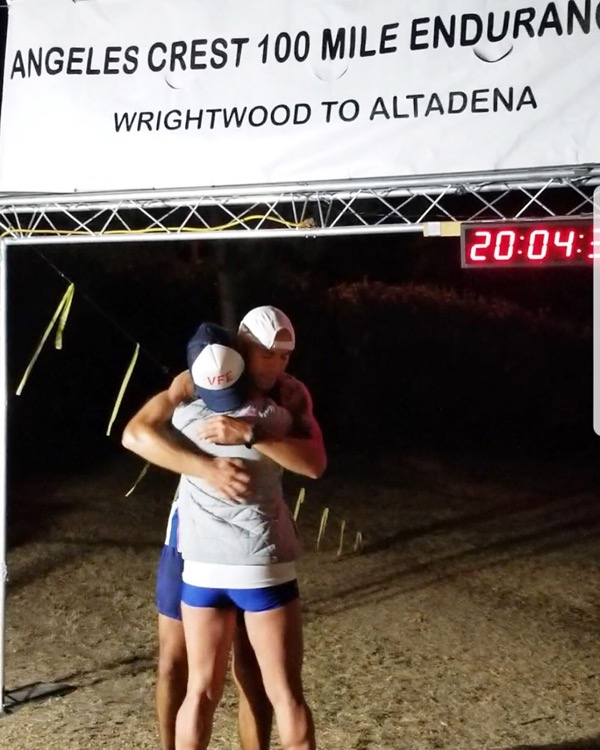 Embracing fiancée Mayra at the finish line, without whose love and support none of this would have been possible. 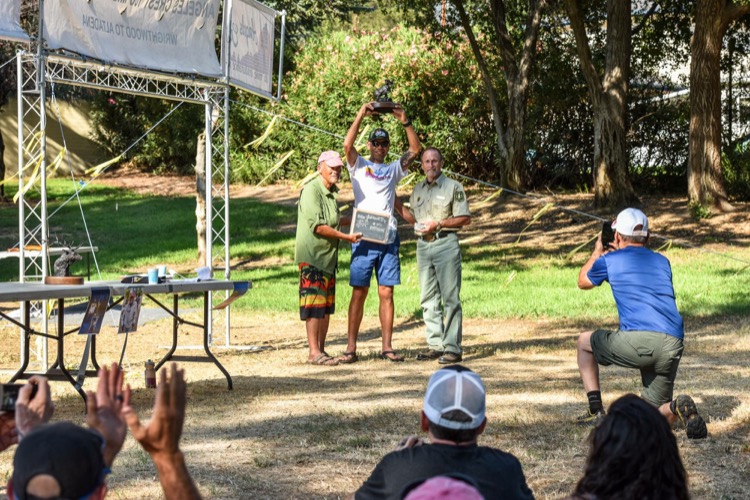 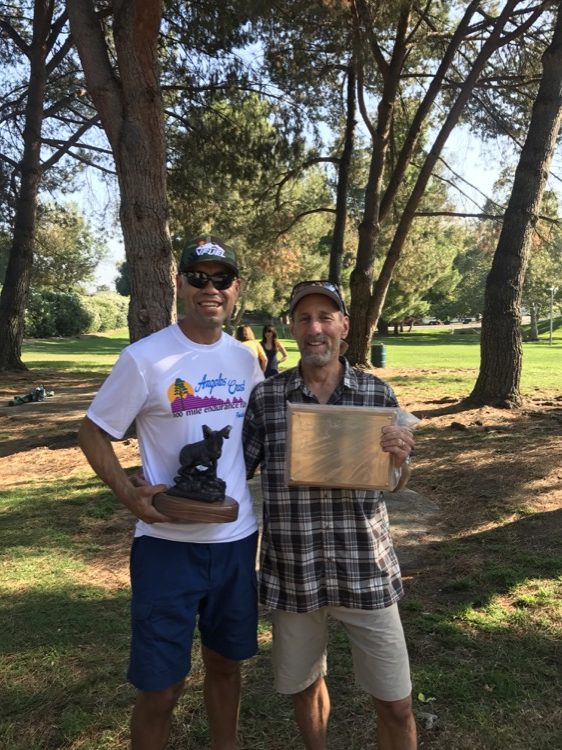 Jerry with coach Tom Nielsen who he worked with for race training and most importantly, a race preparation/strategy plan. 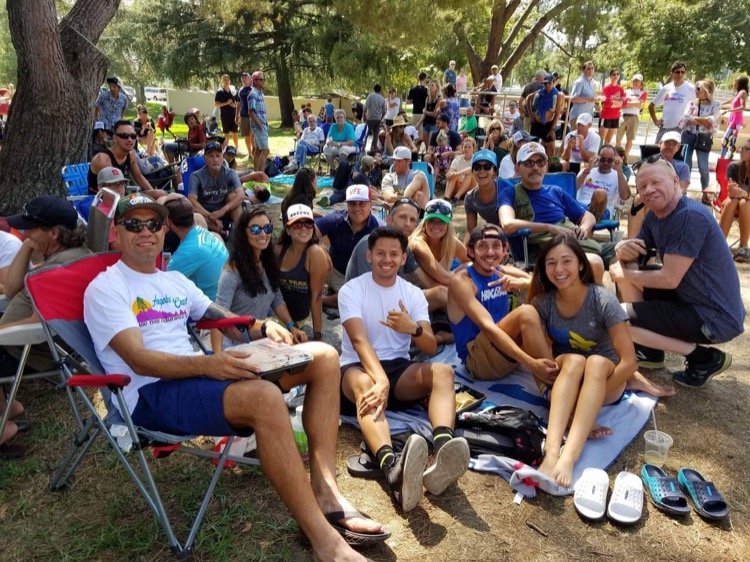 Jerry’s crew. Every single one of them played a key role in getting him to the finish line.