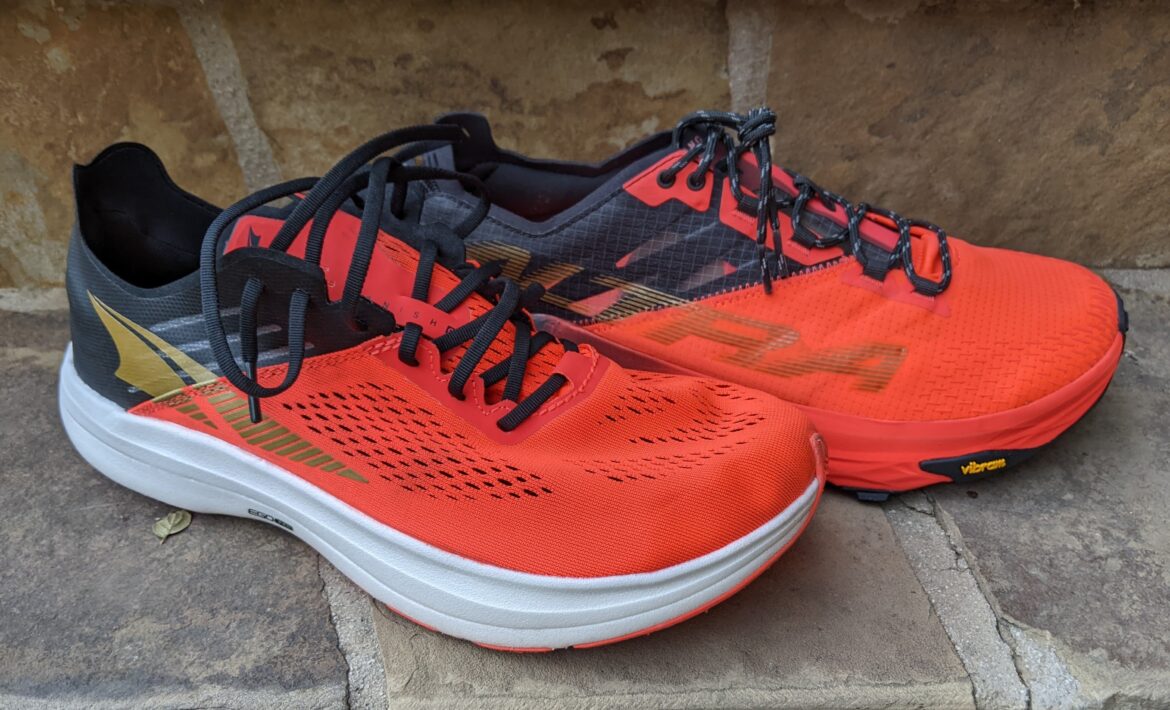 Despite building enormous popularity among trail and road runners, one perceived gap in Altra’s footwear line-up in the past has been high performance racing shoes. This year, the company addressed this issue on both the trail and road, with its new speed category of brand new models that include the Mont Blanc trail shoe and the Vanish Carbon road shoe. Both of these shoes underwent extensive testing with Altra’s elite athlete corps. For trail runners, this includes the namesake race last year – and multiple prototype revisions – before arriving at the production models, which are now available.

The two shoes share some characteristics, such as very minimalist, flexible uppers, thin outsoles to decrease weight and a thick layer of lightweight, high performance midsole compounds. Both have the customary Altra balanced cushioning with zero drop from heel to toe. The types of midsole materials differ, as do the outsole compounds and the basic last shape, but both models are designed with the goal of facilitating speed and preserving energy over long race efforts. 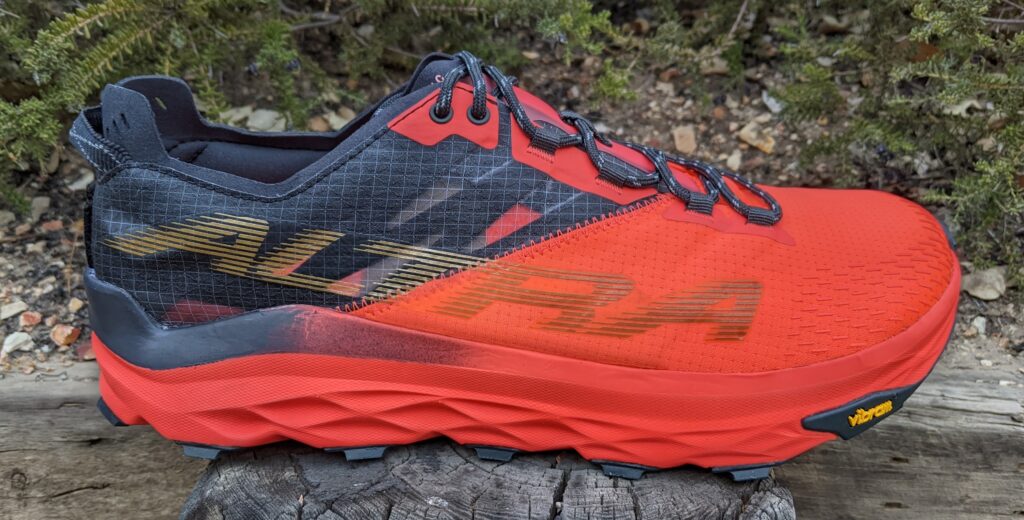 Although the Mont Blanc’s profile might look similar to other models in the Altra trail lineup, the focus on speed is evident as soon as the shoes come out of the box, as all three construction levels (upper, midsole, outsole) are built with lightweight performance in mind. The uppers have a very thin, ripstop nylon mesh that has great flexibility to move with the foot as needed. Single-layer portions of this mesh are translucent, but a fabric cage reinforcement helps attach the midfoot to the platform, and an additional fabric layer and protective elements in the forefoot keep grit out and resist punctures and abrasions. Most notably, the heel cup is very soft and flexible, which can lead to more rearfoot movement than with other Altra models if the fit is not precisely secured, particularly on technical terrain. There’s a similar issue in the forefoot, where the thin fabric does a great job of keeping debris out, but also allows more lateral foot movement than other Altra models. We had to really focus on establishing correct positioning and tightening the laces to get the fit just right. It’s worth noting here that Altra plans to release a dual-dial BOA version of this shoe in the fall, which might improve the lock-down of this particular upper design. 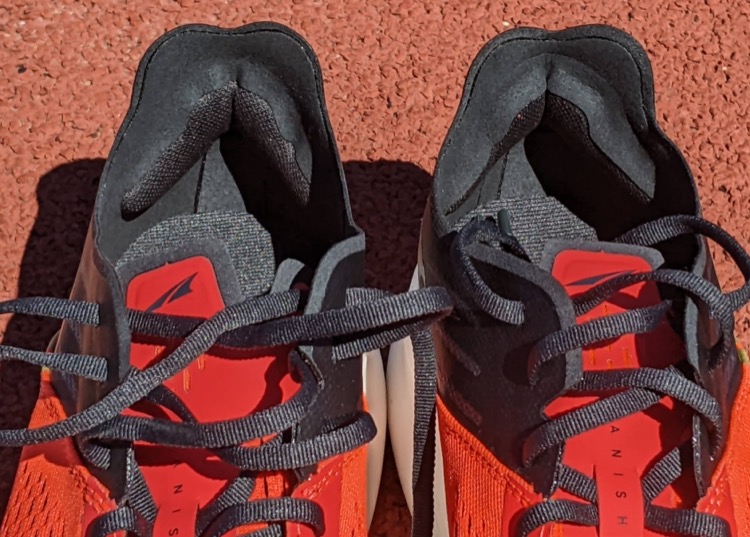 Light heel padding and minimalist heel cup on both models 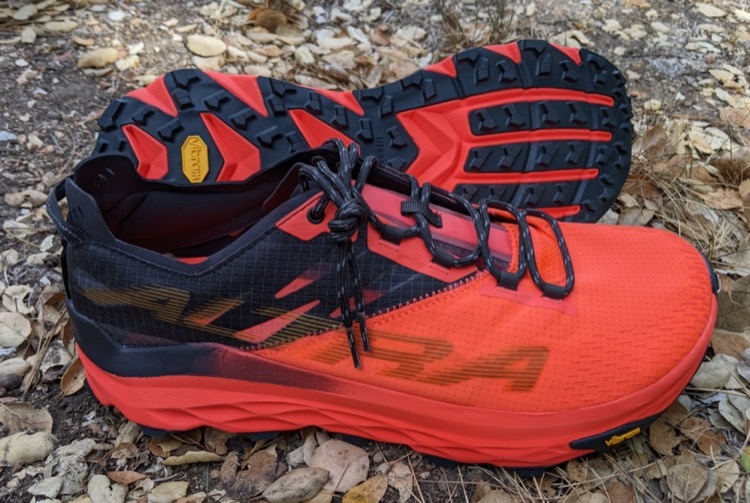 For the midsole, Altra uses an EGO Max compound that is new to its trail lineup but is well established in the company’s road models for its combination of plush impact support and responsive propulsion. The energy return is noticeable compared to other Altra trail models and was particularly apparent during a 40-mile race on a combination of gravel roads, smooth single track and rocky single track, where we felt reduced leg soreness compared to similar efforts in other shoes. There is a slight rocker geometry in the front of the shoe to further facilitate forward propulsion.

For the outsole, Altra departs from its customary MaxTrac compound in favor of a Vibram Litebase that has excellent durability and traction at about one-third of the weight of standard Vibram compounds. To further trim weight, the rubber is applied in targeted impact areas rather than across the entire surface. The tread is aggressive and has very impressive grip in wet mucky conditions, particularly given a relatively shallow depth of 3mm, and the lugs are small enough to not feel clunky when navigating over rocky terrain. The Litebase compound also has strong enough durability to make it suitable for races that are a combination of road and trail surfaces. 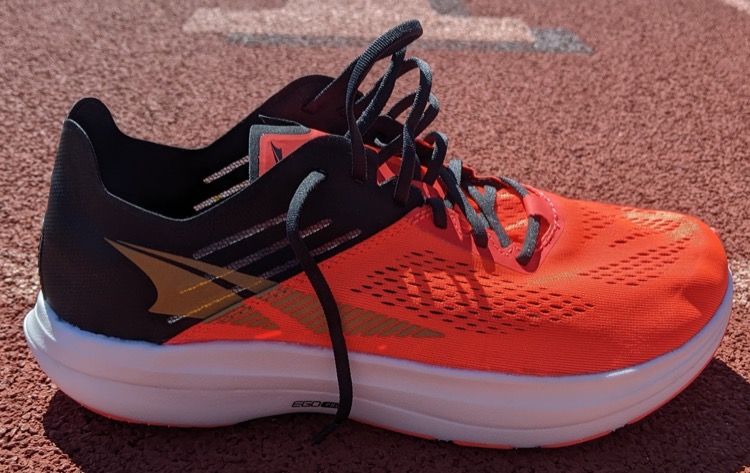 The Vanish Carbon is Altra’s first foray into the super shoe category of road models, and is built with fast training and racing in mind. As with the Mont Blanc, the uppers of the Vanish Carbon are very thin and flexible with just minor cage reinforcement around the midfoot and a small amount of padding at the heel. Unlike with the Mont Blanc, the minimalist approach to the upper of a road-specific shoe doesn’t pose much functional drawback when it comes to foot movement. The biggest challenges you’ll have with the fit are sprinting in lane one during track workouts or hugging tight corners on road tempo sessions. We did both in our testing, without any problems from the foot moving around on the midsole platform. We did encounter one fitting quirk with the upper at the base of the tongue, which is ungusseted and tends to double over on itself if you’re not somewhat deliberate in putting the shoes on. The Mont Blanc tongue has side gussets, and we found ourselves wishing the Vanish Carbon had the same. 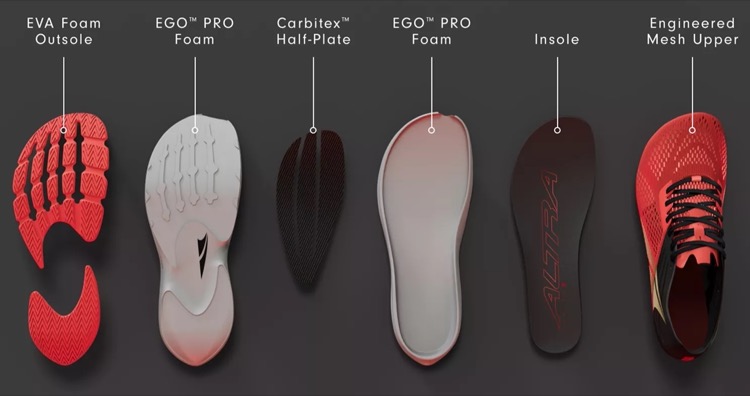 The real star of the Vanish Carbon is the midsole, which combines two brand new technologies for Altra that work in combination with each other. First is a dynamic Carbitex carbon plate that is flexible in dorsiflexion as your foot rolls forward, but is rigid in extension for more propulsion at toe-off. As you might expect, Altra puts a few signature twists on its carbon plate setup. The Carbitex plate is shaped to match the customary last of Altra shoes, and the plate itself is split into three anatomic sections that save a bit of weight while maintaining full function of the material. Most distinctively for the super shoe category thus far, the Carbitex plate is only in the forefoot, and does not extend to the rear of the shoe. This aligns with Altra’s identity as a zero-drop (or as Altra calls it: balanced cushioning) company that favors neutral strike runners over habitual heel strikers, but it also excludes a large subset of runners. If you’re someone who normally has a heel strike, or who does so due to fatigue in the late stages of races, you sacrifice some of the performance benefit that you’re paying a premium price for with the Vanish Carbon. 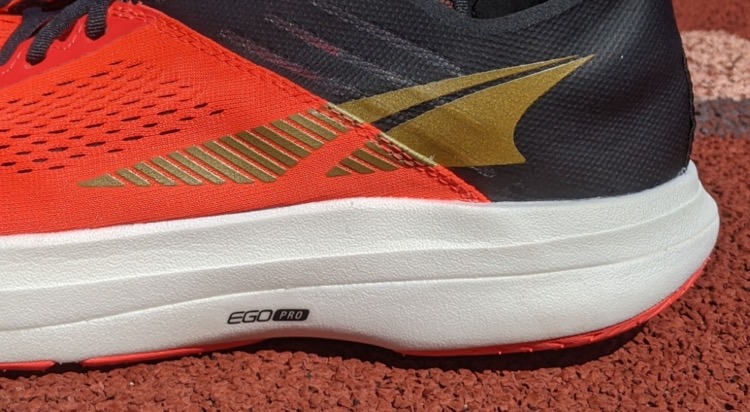 The second new technology in the midsole is the debut of a new TPE-based foam called EGO Pro that is the lightest compound Altra has ever created, while simultaneously having the most cushioning and most energy return of any midsole material they’ve used before. This foam sits above and below the Carbitex plate, combining the performance aspects of both into a highly responsive ride. We found the compound a bit firm during our initial test miles, but after a couple of outings the softness became more apparent while the responsiveness remained strong. The overall midsole geometry is slightly that of a rocker in the rearfoot – which helps offset the heel strike concern we mentioned above – with a more pronounced rocker in the forefoot to further facilitate energy transfer in the forward direction. 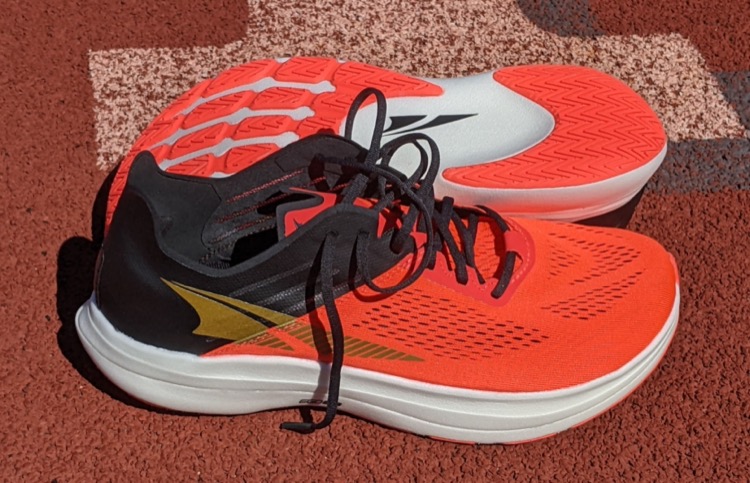 Keeping with the minimalist theme, the outsole of the Vanish Carbon consists of a thin EVA foam at impact areas in the heel and forefoot, providing adequate traction while adding minimal weight. We appreciate that the covered surface in the rearfoot extends adequately on both the medial and lateral sides, as some companies tend to excessively favor one side or the other this way. Predictably, from an EVA outsole compound, the wear rate is faster than traditional outsole rubber, and we’ve noticed marginal wear after about 75 miles in our test pair. This probably isn’t a pair you’ll wear for 500 miles, but that’s not really the point. More likely, it’s a pair you’ll save for fast workouts and race days, when you’re looking to maximize your pace on every mile. Without question, it feels much easier to run fast in the Vanish Carbon than anything we’ve used from Altra, and is comparable to some other carbon plated options we’ve tested. So from our perspective, the company’s goal of creating a top-end speed shoe is certainly accomplished.

The Altra Mont Blanc and Vanish Carbon shoes are available in men’s and women’s versions from www.altrarunning.com.