On Friday, March 13, some of the early arrivals—about 100 runners—sat under a big tent waiting for race orientation to begin before Saturday’s main event. Approximately 50 miles of trails through the Everglades had been flagged, nearly 100 signs placed, trails trimmed back and aid stations set up to support 50 miles, 50k and 25k the following day. Twenty minutes before the meeting was to begin at 5 p.m., a message was received from the state capital in Tallahassee that every special event being held in Florida State Parks was to be shut down and canceled, effective immediately.

This was the ninth year for Everglades Ultras, which is held in Florida’s largest state park, the Fakahatchee Strand Preserve. Support from the park management staff has been phenomenal over the years, so when we were told that the park manager would go to bat for us in an attempt to secure an exception, we knew that he would do everything possible to make that happen. It wasn’t a guarantee that race weekend would continue but the orientation session began and after the usual welcome, runners and volunteers present were told that the race might not happen after all. 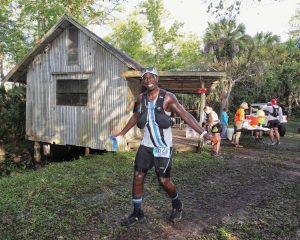 Though all special events were canceled, Florida State Parks would remain open. For us, that presumably meant that people were free to run or walk or bike on those trails on their own, if they wanted to. After literally months of work, the park had already been prepared for our race. One possible option, in the likely event of cancellation, was for runners to get out there the following day and run the course on their own, recognizing that the course was marked and water was already in place. I promised to notify everyone by email blast just as soon as we found out about the possible exception for our event. That news came at about 7:30 p.m., when we were told that we would be allowed to race the following day. As it turned out, Everglades Ultras was apparently the only exception throughout the state of Florida’s park system on March 14. 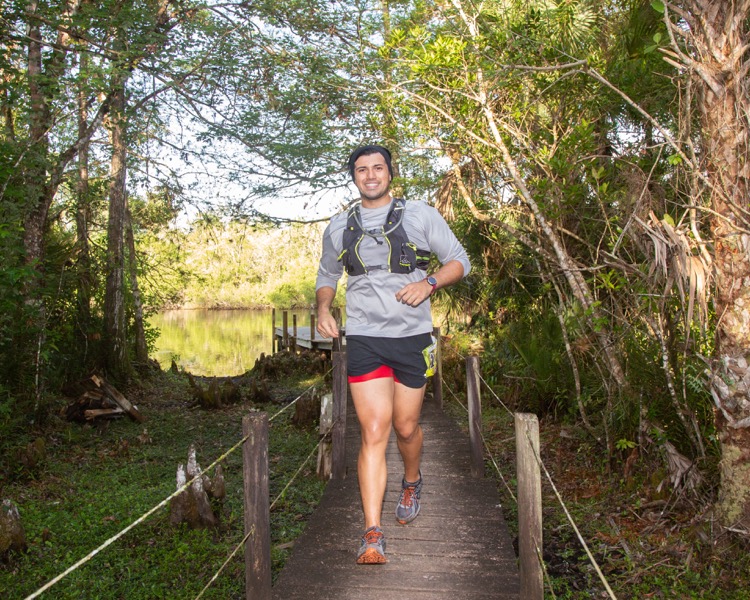 On Saturday morning, the 50-mile race began in the dark. Gradually, as the sun came up and hours went by, the day became very warm and then quite hot. The heat was definitely a challenge for nearly everyone, but the fabulous condition of the park and beauty of this extraordinary course made it excellent for racing.

Legally, the State of Florida owns Fakahatchee, but we all know that it’s really Mother Nature who sets the rules. Some years the park is very wet and limits where we can effectively run and other years, like this one, the park is sufficiently dry so that point-to-point and loop courses can be created. Fakahatchee boasts the largest variety of orchids and bromeliads in North America, and it is part of the Florida panther habitat. Runners have, in the past, actually seen panthers, black bears and bobcats, the rare Florida mink, and other wildlife and wading birds while running through the exotic swamp lands, grassland prairies and wooded uplands of this terrific resource. This was one of those years, with many animal sightings. 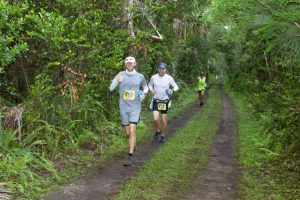 Race marshals ride UTVs on all active trails to monitor runner safety and remove the occasional critter—i.e., alligator—sunning itself on a trail. While we have never had an issue with reptiles in the park, seeing alligators is common, as is the occasional snake. These sightings add to the excitement and mystery of this unique racing experience.

There were 267 registered runners on race day, with another 20 having previously dropped out. Of those 267, 209 (78%) started the race and 197 finished, including 40 of the 48 50-mile starters. Most stayed for the post-race gathering under the big tent on the shores of Lake Harmon, enjoying burgers and beer and more. This year, the awards were hiking sticks, each unique with a custom-designed Everglades Ultras medallion. Congratulations to all our winners, especially the male and female winners of the 50-mile race, both of whom were running their very first 50-mile event: Ashley Slaughter, 27, of Miami Beach won the men’s race in a time of 8:31:31, and Michelle Malia, 26, of New York City, whose winning time was 9:26:01.