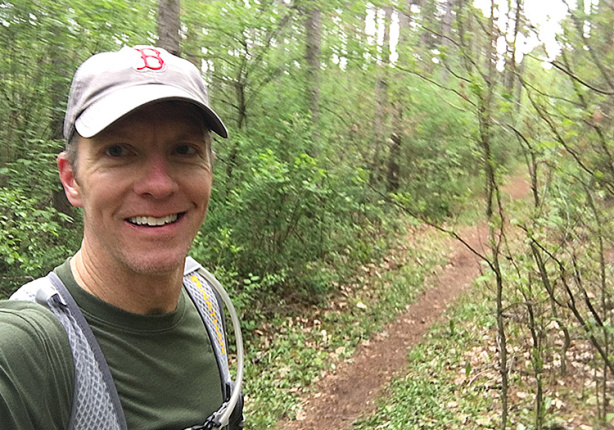 “Longest run ever” selfie at 50k

The hills kept coming. Our buddy Otter had warned that this third section of the course, the 18-mile out-and-back to the Emma Carlin (mile 40) aid station, would be “objectively the hilliest…in terms of the number of hills and the overall elevation gain.” I stayed in my aerobic zone, power-hiking the steeper hills such as Bald Bluff while running the gentler ones. This late in the race, my toughest task was firing up the legs again after each ascent.

But still firing they were, a good omen considering I’d never run more than 50 km when Dan, Otter and I arrived at the start line in Kettle Moraine State Forest, the two of them seeking redemption for previous 50 mile DNFs. Otter’s DNF had come on this very course one year earlier, when he’d run out of steam at mile 43.3. So we all had something to prove.

Dan and Otter set the pace on the Nordic Trail

Based on every first-timer account I’d read or heard, I expected a 50 mile sufferfest interspersed with epiphanic moments of clarity. So far it hadn’t worked out that way, thanks in part to the weather: cloudy skies that minimized the sun’s influence, plus cooler temps to prevent overheating and deter flying/biting/stinging pests.

We stuck together for the first loop (miles 1–10) to ensure a smart and steady pace. The wide and well-groomed Nordic Trail was trail running at its finest—rain-softened dirt and grasses cushioned every step amid verdant surroundings, as though the entire forest had been treated to a fresh coat of green paint. Emerging from the trees, we’d cross an exposed meadow or wind-swept clearing before again being swallowed by the soaring canopy of towering evergreens and more modest hardwoods.

At Confusion Corner we transitioned to the second section of the course on the singletrack Ice Age Trail, so named because it follows the terminal moraine of the last continental glacier. Along the out-and-back to Rice Lake (miles 11–32), Dan and I leapfrogged each other while the leaders flew past, moving in the opposite direction like methed-up gazelles. Eventual winners Chase Nowak (6:36:45) and Larisa Dannis (7:05:56) held significant leads over their pursuers, and I marveled at their speed and fluidity. Luckily my own legs felt strong after road marathons in Boston and Big Sur the month before.

The weather gods kept us guessing. A smattering of tiny sleet pellets greeted us at mile 26; a handful of wind-blown snowflakes followed. The sun even broke through the clouds, providing a brief respite of warmth before again retreating, this time for good.

Nearing the third and final section of the course I felt my core and upper quads starting to tighten and thought, Uh oh, here we go. Much to my surprise they’d get no worse as I forged onward, eclipsing my previous distance record at the 50 km mark. For my race-day mantra I’d jokingly channeled my inner gladiator and chosen “ARE YOU NOT ENTERTAINED?”—which now struck me as fitting because yeah, I really was.

As an ultra-newbie I’d packed enough wardrobe options to make Katy Perry jealous, with several changes of clothes and shoes just in case anything rubbed, chafed or blistered. And my nutrition, which consisted mainly of puréed food pouches and PB&J, was the key to race-day happiness. Otter’s sage advice played on a loop in my head: “Eat early, eat often.” For a happy belly, peanut butter and jelly.

I ran by myself for long stretches, hearing only the gentle crunch of my footfalls, the measured timbre of my breathing and the hypnotic swish of liquid in my hydration pack. Pausing along the trail to relieve myself, and despite the 56,000 acres of open forest on all sides, I somehow managed to empty my bladder directly on my shoetop. All I could do was shake out my foot like a wet dog and laugh at my own sad ineptitude.

Nothin’ but happy at mile 40.2 with wife/crew Katie

For most runners, the scarlet letters “DNF” mean “Did Not Finish;” to ultrarunners, though, they stand for “Did Nothing Fatal.” And that was my goal over the final 10 miles, as the hills kept coming like Stormtroopers. My eyes danced over rocks and roots, triangulating my next step before darting ahead to map out my next three. Suddenly I stubbed my toe and tumbled forward in a flying somersault tuck with a half-twist, landing oh so gracefully in the green foliage beside the trail. I’m used to face-planting on dusty rocky SoCal trails, so falling in Kettle Moraine felt like landing on unicorn feathers. Alone and unfazed, I hopped up and continued on my way.

Without breaking stride I passed the mile 48.5 aid station, buoyed by a surge of home-stretch adrenaline. Rounding the final turn, a wave of awestruck pride washed over me as I spied first the lime green FINISH banner, then my wife/crew Katie, and finally the official timing clock dispassionately reducing the blood, sweat and tears of each finisher to six digits. Mine were 09:54:30. I’d broken ten hours. Holy SHIT.

Gratefully I accepted my first-ever finisher buckle, gloriously embossed with woolly mammoth mascot. I parked myself at the finish to watch Dan emerge from the forest a short time later, arms raised in understated triumph. An animated Otter followed, having added to both his finish time and legacy when he joined the Flatlander Ultrarunners for a successful beer bong at the Emma Carlin aid station. We stuck around long enough to cheer across the last finishers ahead of the 12-hour time limit.

If this were a high school yearbook, I might say Ice Age was 2 good 2 be 4 gotten—an amazing race in an amazing place. Huge thanks to RD Jeff Mallach and his crew and volunteers for making it so. The three of us had arrived in Kettle Moraine looking to “buckle” down and finish what we’d started. We left with heavy quads, 50 miles worth of memories and exactly what we’d come for. We left with nothing to prove.

A longer version of the author’s report appears on his blog at Blisters, Cramps & Heaves.