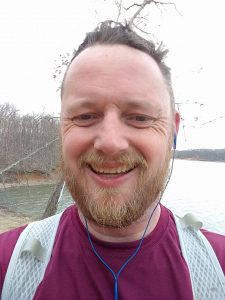 It’s still dark out and I’m awake…on a Saturday. I tossed and turned most of the night, so the alarm going off wasn’t terribly surprising. I threw back the covers and immediately, the cold air hit me, and I second-guessed getting out of bed. At this point it was too late to turn back.

When I arrived at the starting area, I found my way to the middle of the pack and tried to keep warm. I planned on waiting for music, but the sideways snow, the pre-race jitters and the chatter of the people next to me were all too much. I plugged in the earbuds, queued up the 500-song playlist I made for the race and hit play. I pulled out my earbuds in time to catch the tail end of the race instructions immediately followed by the start of the race. It was finally time to move.

I fell in behind a group of runners from the 23K distance. This could be bad. My tendency is to try to keep pace with the people in front of me. If I’m not careful, I could end up blowing up and really regretting it. Surprisingly, I kept pace with the group fairly easily. There was still a little snow on the trail even though a number of runners had already passed through. I quickly peeked off to the side of the trail to check out the scenery. When I switched my attention back to the trail, I realized that everyone in front of me had stopped. I figured there had to be something huge to stop everyone like this, so I peeked around the group to see a three-foot-wide stream of water running across the trail. I paused my music and heard the group debating the best course of action. As politely as possible, I made my way past the group and crossed the small obstacle in disbelief. No more than fifty yards down trail, the entire group comes flying by. I let them pass knowing full well that I would catch them again at the next inconvenience. This pattern continued for the next couple of miles as seemingly every root, rock, puddle or patch of snow provided reason to stop, conference and then proceed. It was a long couple of miles. Mercifully, we arrived at an aid station.

With the group of indecisive runners getting into the aid station ahead of me, I knew I had to be quick. I checked the food available, and a volunteer handed me back my bottle and wished me good luck. I spotted the group of runners from before. It would be a while before they made it back onto the trail, so I was reasonably sure I wouldn’t see them again. At an easy trot, I left the first aid station determined to get some miles and separation.

All of a sudden, everything felt right. The trail itself was clear and not frozen or muddy, and the woods looked like something from a Frost poem. By the time I arrived at the mid-loop aid station, I felt better in this race than I had in years. The back half of the loop is a little different than the first. Before long, my legs were beginning to burn a little. Looking at my watch, I realized that I was just under 10 miles into the 60k race, which meant I still had a marathon, and then some, to go. I consciously slowed my pace and enjoyed clear views of both Lake Barkley and Kentucky Lake throughout the course. Just before reaching the end of the loop, I noticed two guys carrying a large Team RWB flag. I came up next to them and pulled out the earbuds.

“Really? What was your MOS?”

“Too funny. I was up at Lewis in Washington. You?”

“Bragg. I’d rather be a lawn dart than a dirty leg…”

“…said the guy humping it through the woods like a dirty leg.”

“Ha! OK you got me. What distance you going?”

“Oh wow. Yeah…we’re almost done. A half marathon is enough for me.”

“I’m glad some of us have some common sense. It was good talking. I’m gonna get going.”

“You too. Good luck with the rest of your race.”

“Thanks.” In the distance I can see the beginning/end of loop aid station.

By the end of the second loop, the toll of the miles was starting to get to me. At the end of loop aid station, I noticed that my hand was stinging. I pulled off my glove, and there was blood everywhere. After some convincing, the aid station workers patched me up and sent me back out. One loop left.

I was running at around an 11-minute-per-mile pace, which meant about two hours left. Since my goal was sub-eight hours, this was really good news. According to my watch, I was at 27.5 miles, just under 10 miles left. Then, as I planted my left foot, my IT band screamed at me and my left knee almost gave out. I winced out loud, quickly got my right foot down and hopped to a stop. Shit.

It was time to make a decision. After a few test steps, I knew I could walk on my knee, but running wasn’t too likely. If I turned back now I would have a marathon finish of somewhere between 31 and 32 miles. If I pushed on I would get my full 60k finish.

For the last five miles of the trail, music was my pain killer. I focused in on each song as a way to ignore the sluggish legs and sore feet. Between the last two aid stations, three songs I put on my playlist to remind me of my family came on, and I couldn’t help by smile in spite of everything else.

When I reached the start/end aid station, I felt drained but content. The aid station captain must have been waiting for me because he trotted over to check on me. I assured him I was fine. He smiled at me and said the best thing I’d heard all day, “Only 1.7 miles left.” I thanked him, and all the volunteers, before heading out on the road.

Standing on the crest of that last hill, I tried running. After a few steps, I knew I could finish the race running. Each stride downhill brought me closer to being done, which made the burning ache in my quads easier to take. Through my earbuds, a song I didn’t really recognize started up. From the guitar, I figured out that it was the band, Dead Man Winter, who was still pretty new to me. When the opening lyrics started, my breath caught, and I felt choked up, “I was safely on the run, in fall/in a city after dark/and I found I knew no one at all/it took the blood right out my heart.” The song isn’t about running, but it fit the moment.

Pounding out the last half mile, there was the strange sensation of overwhelming joy and pending loss. Though I didn’t know it then, this would be my last race (three subsequent knee surgeries ensured that).  Sitting here almost two years later, I know I will never run another trail race, and the song still has the same impact. The loss that song is about hit me in a personal way. For the better part of a decade, a large part of how I viewed myself was tied to running, and now that part of my life is over. I listen to that song often.