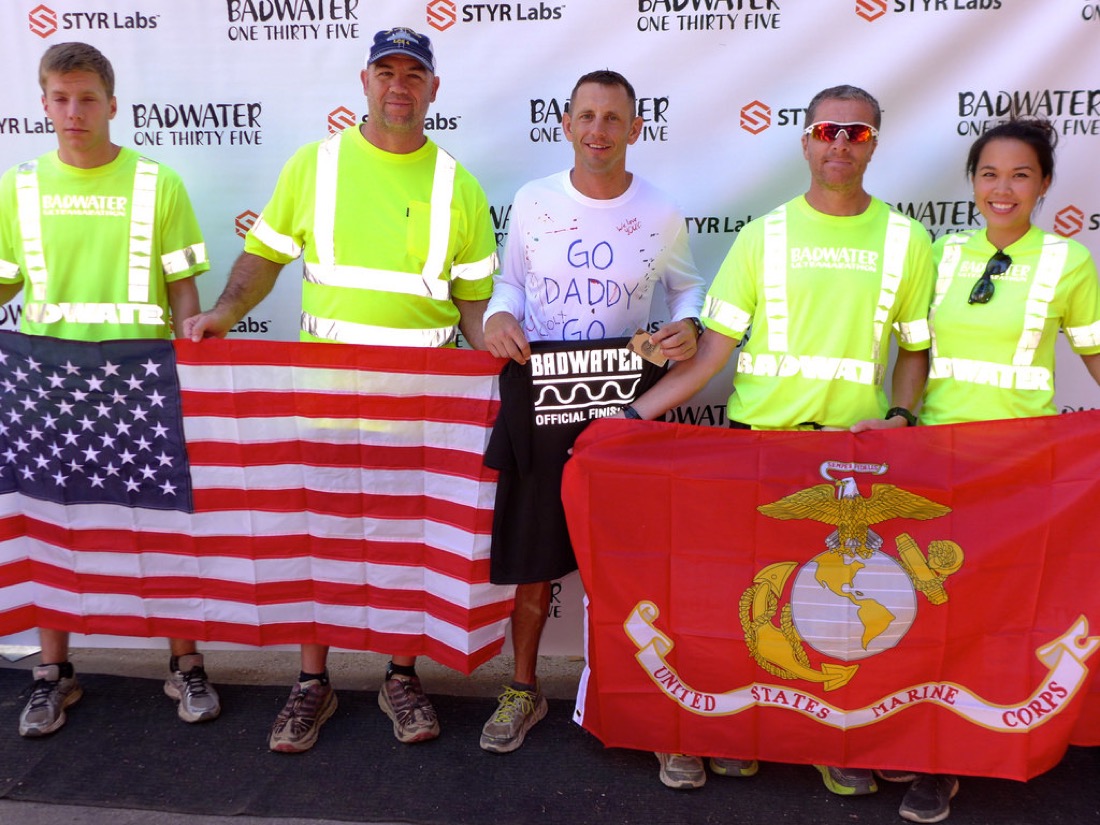 It is difficult to believe that this all happened.  The STYR Labs Badwater 135 Ultramarathon is the most storied event in the ultra-community while my mind realistically unattainable and virtually impossible to get in.  I was equally shocked and amazed that I was selected on my first application attempt and I can sincerely say I fully enjoyed every minute.  At times I was in awe of some of the legendary participants and event itself but in the end this turned out to be a race against the course.

A friend of mine was invited to the 2014 race and asked me to crew, this was to be my first Badwater experience.  Unique that year, AdventureCorps was struggling with National Park Service relatively late decision to no longer allow sanctioned athletic events within the Death Valley park boundaries. Therefore, the race course was altered and began from Lone Pine achieving three significant (equally challenging) climbs while still culminating at the Mount Whitney Portal.  One of the climbs was to Cerro Gordo and due to the condition of the road no crew vehicles were allowed requiring a pacer to Sherpa supplies 16 miles up and back for the athlete.  Juan completed and earned his belt buckle but was not satisfied with the finish on the modified course. So in 2015 we returned to the original course (but now a night start which I assume was the required compromise to allow Badwater to continue on the epic course).   Unfortunately due to an injury we withdrew at Panamint Springs that year.  I highly recommend crewing if able for both the experience value as well as the application “credential”.

I was now faced with a likely now or never scenario for myself, with the past two years on crew support (and an open 2016 calendar) this was perhaps my best opportunity for acceptance.  After discussion with my girlfriend and a few other trusted agents, I gave the application questions their necessary attention and sure enough I was in.

My training began, similar to other ultra-events, with establishing an endurance base while I develop a race strategy and assemble a crew.  I was still in fairly reasonable shape from a busy 2015 and did not have much trouble transitioning to 10 mile hill-focus training and shorter tempo and recovery runs.  Ultimately my goal was to conduct multiple stacking weekends with back-to-back long runs requiring to run on tired legs in hot conditions, unfortunately due to work and life schedule many of the longer planned events were abbreviated or eliminated entirely.  Regardless, my strategy entering the race was to try to run from the start to StovePipe Wells (~42) at a brisk but comfortable, sustainable pace. This should give me plenty of time to complete the remaining distance assuming that I could at least keep moving.  If able to manage on little to no rest breaks and barring injury, I felt confident.

I drew the middle (9:30pm) wave which was fine for me except I could not fall behind until the first “tight” cut-off at ~50 miles. The temperature at the start, while above 110, was not a major factor and a strong tailwind both boosted pace and morale.  I was able to stick to my game-plan and it seemed that most adopted a similar to slightly faster pace.  Being from Hawaii, I never got used to the intense dryness which helped encourage hydration (at no point was I dehydrated).   In theory this was also good since I was using carbo-pro energy supplement with my water given to me at every crew stop (~2miles).

At StovePipe I enjoyed 15 min nap in our hotel room as I prepared myself for the first climb. All together throughout the race I would take 3x naps for a total of 1 hour.   I thought that I would be well established in my climb before the rising sun would start to re-heat the desert but in reality the sun comes up remarkably quick and rising temperature was almost immediately a factor.  The climbs required patience and discipline to refuse the urge to walk across the street to join the A/C of the crew van for a few minutes.  Despite the challenge, I completed the climb without too much difficulty and looked forward to the descent.  Even with the downhill, my run pace and walking pace were getting closer and closer which resulted in preference for “power” walking which I could do with much lower energy expenditure.  During the time my crew also established a sleep routine and I had to do my first sock exchange and duct tape application to my left foot due to developing hot spots.

During the rest of the course I noticed that there were many sections that we did not seem to be making any progress, the final descent into Panamint Valley seemed to be one of those as the dry lake bed never seemed to get any closer.  This was also our first major and probably most intense temperature period coupled with a sandstorm caused by southern winds. We finally arrived at Panamint and my crew went in for some well-deserved real food (still none of which sounded appetizing).  The climb out of Panamint did not seem as bad since we started from nearly 2k’; however, I had certainly lost the ability to drive myself at all.     At around 4k’ the climb continues but greatly reduces slope and the combination of the setting sun made for a welcome combination.  Around this point we also surprised a small rattlesnake warming on rocks on the side of the road, my headlamp scan increased after that as the prospect of being involuntarily removed for a snake bite was not a good option.

Probably my biggest mental challenge began at around Darwin (~90) when I was having difficulty imagining another 45 miles.  I initially broke the remaining distance into 5 mile blocks and started to try to chop them down but quickly got frustrated and was being tempted to rest.  I struggled for about 10 miles but eventually push hard for another 10 which got me to ~110 and about one marathon to go.  While in a much greater positive state with that progress and the rising sun I also could not believe how quickly the rising temperatures drained me along with the annoying straight rode to Lone Pine.  I spent the time hydrating and preparing myself for the final climb.  A major mistake (in retrospect) was running random miles on the way to Lone Pine, while this may have gained me minutes my feet suffered greatly while absorbing heat from the road.  We finally arrived at Lone Pine, I took my final 15 min nap while my crew attacked McDonalds. I was sure that I would be able to eat salty fries but my appetite never really returned until I was done.

The climb to the Whitney Portal was not difficult and I enjoyed final times with each crew member as a pacer.  I had plenty of time and finally accepted that I would finish.  The finish line itself is relatively unexciting but flanked but giant peaks and rock faces.  I was happy to report that we were able to execute our strategy almost perfectly and while not fast, we were consistent and laughed more than all others.

Positives for the race were solid hill climbs which I assume resulted from decent regular hill training at the hottest parts of the day as well as my hydration.  At no point was I even close to dehydration which was unbelievable to me.   Most importantly though, my crew did a fantastic job and despite only one vehicle and limited opportunities to resupply they kept me going and remained supportive (at least in front of me).

Negatives include challenge in getting calories caused by, I assume, too much CarboPro early without varying other sources.   My ability to run effectively beyond StovePipe Wells limited our options and further increased the possibility of injury, heat issues, etc.  Lastly, for some strange reason my left foot was in terrible shape when I finished even though my right foot was fine and without any blisters. No idea on that one.

The Badwater 135 is an epic journey and I am incredibly proud that we were invited and were able to finish.