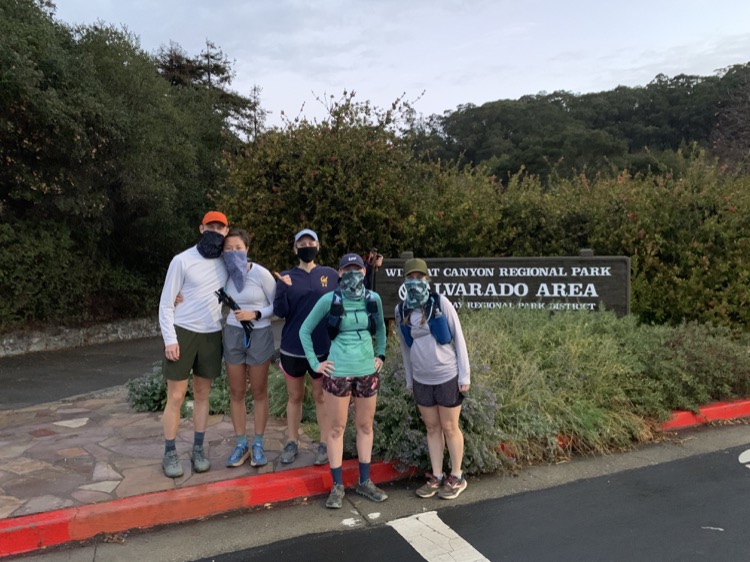 As we pulled up to Wildcat Canyon, the start of the East Bay Skyline National Trail, jitters set in: I was about to run my first 50k. At 7 a.m., my friends and I pulled on our packs and collected in front of the park sign for a picture. A minute later, we started our watches and took off, eager to begin the day.

Since races were cancelled due to COVID, I needed to create my own 50k experience. A few months before my attempt at the East Bay Skyline Nation Trail, I reached out to Chris Thoburn — the current FKT-holder — for advice about this Bay Area favorite. The course connects several of the East Bay Regional Parks and includes a variety of terrain from rolling pastures dotted with grazing cows, to verdant redwood forests and soaring eucalyptus groves. “In terms of the greater FKT-verse, I doubt this route has registered on the radar of very many folks, but I feel it should,” said Chris. “The Bay Area has long been a bastion of the ultra and trail running scene in the US, and it makes sense to show off the best we have to offer to the world.” Choosing to run this incredible route with a few friends and a small crew became the perfect solution to my cancelled race conundrum.

Within an hour of starting, a dense fog moved in and swallowed us. The previous night’s rain turned the trail’s sandy, cow-patty-covered surface into a thick paste that caked our shoes, so we were grateful when we reached the paved Nimitz Trail. As we left the pastures behind us and headed down to our first aid stop at Inspiration Point, the temperature dropped and the wind picked up. Despite the mud and erratic weather, the first miles passed by quickly. 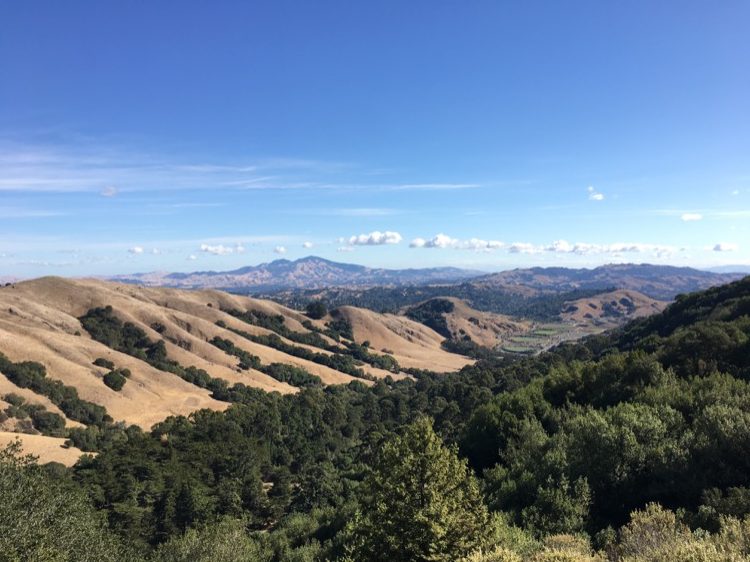 As we climbed up Seaview Trail from Inspiration Point, we missed out on the usual postcard-like views of the iconic Bay Bridge, Golden Gate Bridge and the San Francisco skyline, due to the thick mist. Just after mile 10, we began what Chris called, “the toughest 10k of the course.” The terrain started out steep and technical, which was harrowing when rounding the narrow cliff sides. After the cliffs, the trail descended, luring me to take it at full speed. As Chris pointed out, it can be “very tempting to hammer this bit hard (and you must if you want the FKT).” Even though I wasn’t aiming for an FKT that morning, I flew down the trail with reckless abandon. For the next two and a half miles, tears streaked from the corners of my eyes as the wind hit my face. At mile 13, the start of one of the more grueling ascents of the day, I immediately regretted my decision.

After a long climb into the heart of Sibley Volcanic Regional Preserve, the trail took us down into the Huckleberry Preserve. On paper, this bit doesn’t look particularly challenging based on length and elevation profile, but it was unforgiving, nonetheless. The loose rocks, aggressive descent and grinding climb proved slow-going for us all. When we arrived at our next aid stop at Skyline Gate (the halfway point), we felt every bit of that segment and took a longer-than-planned break. 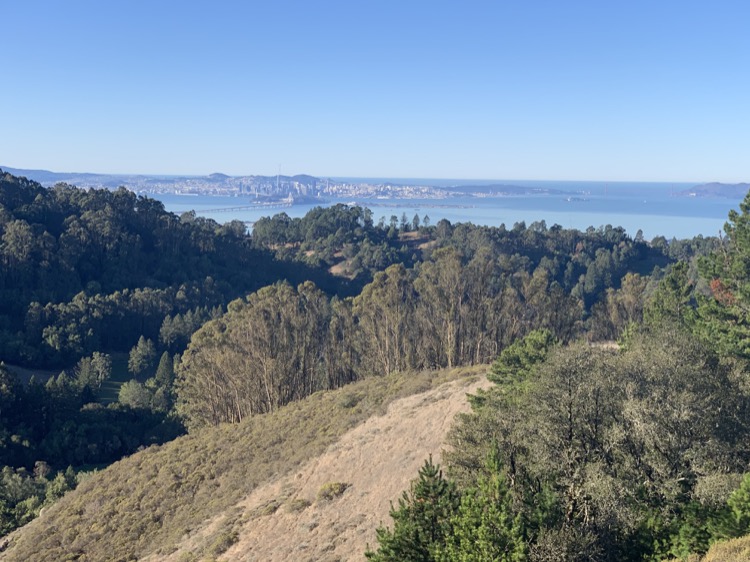 The third section of the course after Skyline Gate was primarily along the French Trail, a stretch of single track with short, steep climbs that passed through the stunning Reinhardt Redwood Regional Park. Some of the junctions weren’t marked well and GPS became unreliable. “You have to know and trust the effort level and the total elapsed time for [that section],” advised Chris. That trek was the hardest part of the day for me. I felt heavy and was hit with a wave of nausea. Around mile 22, we spilled out of the woods and across the street to the Big Bear Staging Area for a third aid stop. Having already climbed roughly 4,600 feet, I was exhausted and dreaded the next big climb. But right at that moment, a car pulled up. The driver leaned out of her window and asked, “Are you guys a running team?” Without missing a beat, my friend Liz answered, “Heck yeah, we are!” It was precisely what I needed to rally for our ascent up MacDonald.

We reached the top of that long climb in surprisingly good time. My nausea subsided and we refueled at our last aid stop. Serendipitously, the sun came out, and we took in the stunning views along the back half of MacDonald. Over the last four miles of the East Bay Skyline National Trail, we rolled through a grove of fragrant eucalyptus trees and gently descended into the parking lot of a golf course then on to a narrow gravel path to the finish.

Weary but thrilled to be nearing the end, we hummed the Rocky theme song as we jogged along the last of the trail into the Proctor Staging Area. With our tiny crew waiting for us, we touched the park sign and turned off our watches. As we gathered for a victory photo, reality set in: I ran a 50k. Though it wasn’t a formal race and no FKTs were set that day, I now had a benchmark for this remarkable trail.

Congrats. Self-supported runs like this are also a great way to boil down the experience and sort of realize the big race-event-party, while sometimes fun, isn’t really necessary to enjoy running. If you can run 50k with just your friends (or even solo) then you have the freedom to take yourself anywhere.

Hi Jennifer, thank you for your post! As a fellow east bay resident, you seeded a cool idea in my head. I’m training for my first 50k and have a couple races lined up but this provides a very nice back-up plan if races get cancelled again.

Hey Nick! You won’t be disappointed with that route. It gives you a little bit of everything in the way of terrain and environment. Some of the sections became favorites of mine that I revisit often. Good luck to you on your first 50k!

Any kind of total uninhibited downhill charging could lead to nausea and unwanted cramping & anxiety in a technical ultra. All the praise to you for racing on those over used that are typically too hard – packed!

I am so proud of you!
1. For completing your first 50k! I know you have wanted to do it for a long time but injuries and other challenges kept you from doing it!
2. For sharing this amazing journey on your first 50k. It sounds so incredible maybe just maybe you have convinced me to one day give it a try!

Thank you, friend! You should FOR SURE do a 50k! I’m already looking forward to my next one.

I would have bet that anyone who was able to climb Mt. Kilimanjaro to the top, though in pain on the way, would complete the 50k East Bay Skyline National Trai,l no matter what.
You’re the best!

This was my second 50k last May. (My first was meant to be the Marin Ultra Challenge, which I and many others ended up running unofficially on what should have been race day.) I was living in Berkeley at the time so ran from South to North so I’d have to psychological boost of running “home”.

I might recommend that direction, actually, since it puts you on the gorgeous French trail when you’re still fresh enough to enjoy it. The climb from Huckleberry Preserve into Sibley is brutal, but as Jen notes, it’s not easy going down either. I had clear skies and great views. Only complaint is it was too hot (75F by the end).

Anyway thanks for the report. Brought back some wonderful memories. This is a fabulous route.

Emily, I think you’re the first person I’ve heard of doing the route South to North. How awesome! I’ve been toying with the idea of doing it again this spring, but in “reverse” like you did. This really motivated me (thought thinking about climbing that section in Huckleberry up to Sibley is daunting! Haha!). Best of luck to you in your 2021 running adventures!

Congratulations! I don’t know you but I am very proud of your accomplishment. It takes mental toughness to train and then run a 50K without an aid station or spectators to cheer you to the finish line. This is just the beginning of many more in your future. Keep up the good work!

That is SO kind of you to say, Mama Lisa Felder! Though I longed for a true “race” experience for my first ultra, I’m super happy with the way it turned out. I hope in the near future I can run an actual race to experience that race-day feeling of being energized by all the folks around you. However, your comment really bolstered me, and that is truly why I love this sport so much. The community is everything! I hope you have a fantastic 2021 filled with fun running adventures!