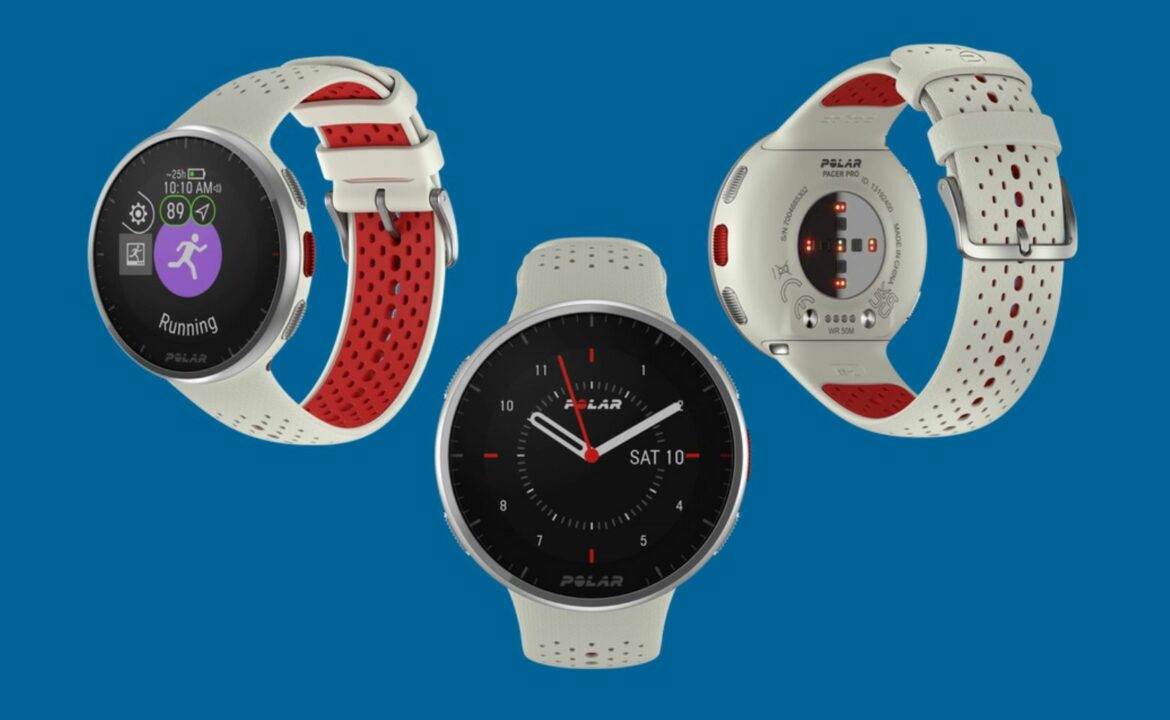 Polar has long been known in the heart rate training world, coming onto the scene in 1982 with the first wireless heart rate monitor. Since then, the Finnish company has released wave after wave of bike computers, sensors and watches aimed at the endurance athletic community. Earlier this summer, Polar released two new watches to its lineup, the Pacer and the Pacer Pro, and we tested the Pacer Pro. 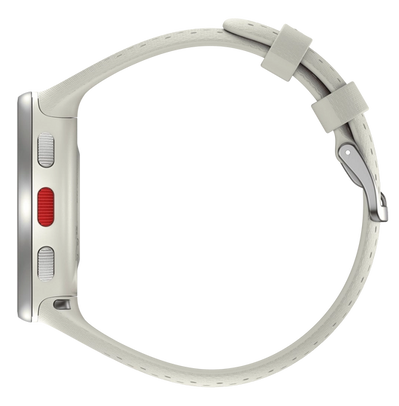 The Polar Pacer Pro’s appearance, in a world of increasingly large and bulky GPS watches, is slim and has a minimal impact on the wrist. For those with smaller wrists that feel like standard GPS watches are too bulky, the Pacer Pro could be a great option. Out of the box, the Pacer Pro comes equipped with bands that are similar to Polar’s Vantage V watches. The bands don’t allow the watch to lay flat but do provide an ergonomic, sleek look. If you’d like to change the band, a hinge-style adapter is included and you can replace it with a standard 20mm size band—a spare band was also included in our box. The Pro also features a new display with memory-in-pixel or MIP readability; this display proved to be crisp and clear even in direct sunlight and with the backlight off. We loved this feature during early morning workouts or even mid-day hikes, and never had issues seeing the display clearly. 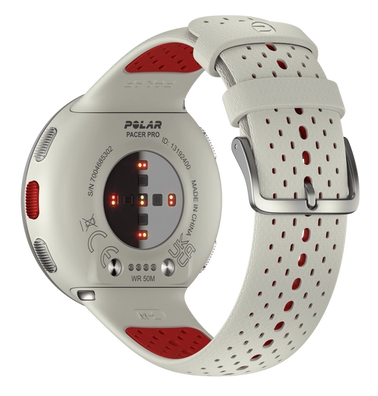 On the backside of the watch, the optical heart rate sensor configuration consists of 10 LED sensors and four light detectors. Paired with Polar’s “Goldilocks” algorithm, we found their wrist-based HR measurements to be quite accurate when the watch is snuggly secured to the wrist. It should be noted that the Pacer Pro does not support SP02 measurements, and the sensor has been omitted from the rear of the watch. The other item on the rear of the watch is the charging port. Following previous versions of Polar products, the Pacer Pro features a magnetic charging port. On the Pacer Pro, it has been slightly re-tooled and called the “Polar Charge 2.0.” It consists of a small magnetic strip that attaches via a cable to a standard USB port and quickly charges the watch. During testing we noted that while this does charge the watch quite fast, the magnet is finicky and did require some adjustments to ensure the product was charging before walking away. We got caught more than once pulling the watch off the charger on the way out the door for a run with only 3% battery life. 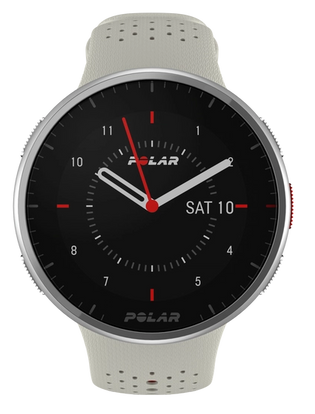 Fortunately, when the watch is actually charged up, the Pacer Pro has a pretty solid battery life. The website states a few different battery life claims with various settings and from our testing, these estimates proved to be fairly accurate. Based on our testing, we can confirm that the watch lasts on average six days between charges during a moderate activity week – say, 30 miles or 8 hours of activity tracking in normal GPS mode. We did most of our testing in “normal” GPS mode which calls for a ping every 1 second of activity and has the wrist-based heart rate activated. For longer efforts, multiple battery saving options are available. Ultra Mode can be activated by increasing the amount of time between GPS pings from 1 second to 1 minute and 2 minutes. Doing this will add multiple hours to the battery life but will significantly decrease accuracy on longer trail efforts. When paired with screensaver mode and turning off the wrist-based heart rate tracking, the watch will last somewhere in the neighborhood of 100 hours. As we didn’t have any 100-hour efforts planned this summer, we did not test this mode to its end, but based on the battery consumption at the other modes, we believe this to be a fairly accurate estimation of the Pacer Pro’s capabilities. Considering the relatively low price point for this watch ($300 USD), the Pacer Pro has a pretty impressive battery life comparable to watches at similar price points.

The main features of the watch are fairly standard with other sports watches across the Polar lineup. Twenty sport modes are available to download onto the device at one time, however, many more are available on the app, and switching between them is as simple as dragging and dropping then syncing the device. Features from higher-end Polar models are transferred over essentially unchanged to the Pro such as HillSplitter and Fueling; you can read more about these features on our GritX review. As with other Polar GPS watches, navigation via preloaded routes is available via Kamoot, where map/topo areas are fee-based and restricted to fairly small areas; our primary tester relocated from California to Utah this year, and this move required payment for a new area to be loaded onto the watch.

One interesting feature of the Pacer Pro that we like is the integrated music controls. The watch does not store any music but uses Bluetooth to act like a remote to your phone in your pack or pocket. You can control volume, pause, skip, replay and see song and artist title display on the watch face during activity, presuming that your phone is close by, which for us was not a problem on long trail runs. 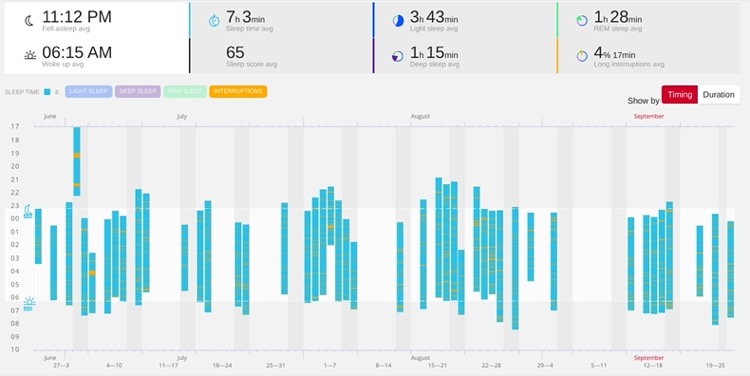 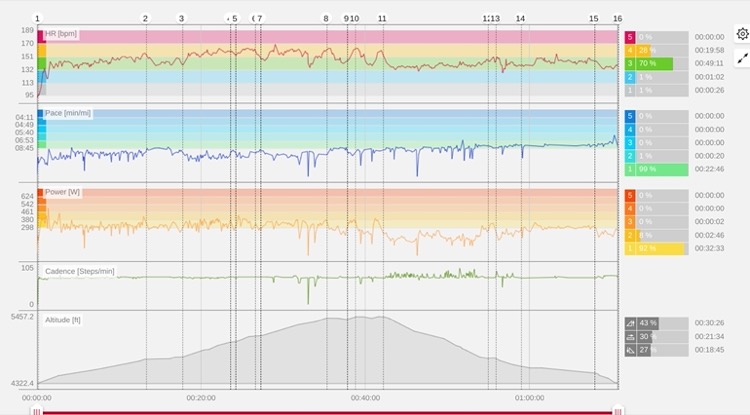 Sleep monitoring is again brought over from previous models, and we noticed no changes in accuracy from the GritX to the Pacer Pro in this area. We like this data point for gauging our recovery over a weekly and monthly basis during training block builds or after race efforts. The data on the device combined with the expanded data on the Flow app provides a great insight to this key recovery data point.

As we have mentioned in previous Polar product reviews, the Polar Flow App and accompanying desktop version are incredibly robust. When compared to Garmin and Coros apps, we find that the data and tools available are hard to beat. Here, we can see results from VO2 max tests, sleep dynamics and a multitude of other data points. We found the data processing and analytics to be a massive advantage for any Polar product, and receiving them in a lightweight, slim profile watch with Polar’s “greatest hits” functionality makes the Pacer Pro perfect for runners who love data and don’t need a robust inventory of high-end features.

The Polar Pacer Pro is available at www.polar.com.