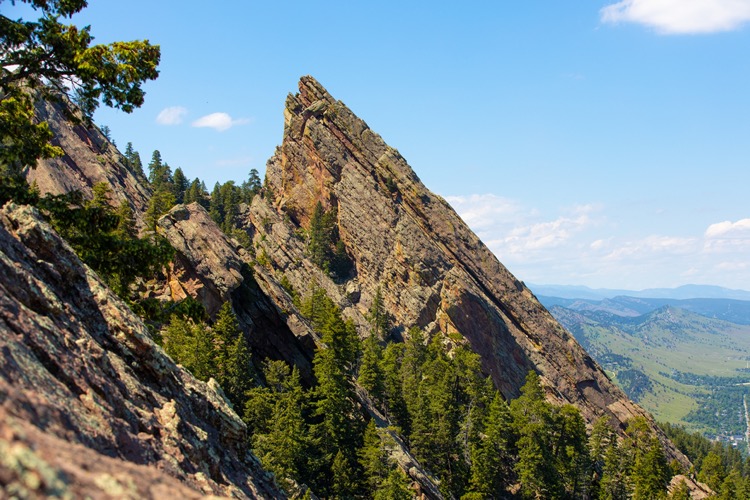 The Flatirons—Boulder, Colorado's city backdrop and the author's backyard setting for continually honing his personal skillset for mixing running and climbing.

What to Know Before Going Scrambling

This article was originally published in the August 2022 issue of UltraRunning Magazine. Subscribe today for similar features on ultra training, racing and more.

As mountain runners and ultrarunners, our fitness has normalized the practice of heading out for long days in the backcountry with minimal equipment. Usually just a rain shell, maybe a small water filter and some extra snacks are all that we need to cover remarkable distances in the high mountains. As such, it can feel natural to tackle more technical, high consequence terrain – readily available in the backcountry and often highly appealing – with the same minimalist mindset.

It takes a relatively small shift in perspective to consider making the route more interesting by scrambling up that steep talus slope and then, trying to traverse that craggy ridgeline to reach a summit or connect a couple of high passes. There is often an aesthetic allure to creating such a link, but getting into tricky terrain might not even be a conscious decision. Especially when the runner is not experienced with scrambling – often defined as starting at Class 3 terrain, where the use of hands becomes mandatory – it can be difficult to judge the degree of technicality on a potential route. Suddenly, the runner can encounter technical climbing movement on unreliable alpine rock with high exposure and little chance for backing down, and the potential for tragedy skyrockets.

Athletes like myself are guilty of having popularized this integration of high consequence terrain and movement into otherwise standard running outings. So, I think it’s worth asking: what is the role of “scrambling” in mountain and ultrarunning, and what are some best practices for approaching it?

There are five classes of difficulty when judging mountain terrain:

Class 1 – walking or running on a trail
Class 2 – off-trail travel
Class 3 – anything when the use of hands is required
Class 4 – increases the degree of steepness and exposure; falling could be fatal, so many will prefer to be roped
Class 5 – technical rock climbing

Most generally, scrambling begins with negotiating Class 3 terrain and is defined by going without a rope. The upper limit of scrambling, however, is open-ended and highly dependent on skill, experience, rock conditions, etc. This is where the confusion and complexity of the issue really come to bear.

In the context of mountain running, scrambling simply allows the runner to cover arguably more interesting and exciting routes, with no need for a trail. Comfort and competence with scrambling opens up new terrain and route possibilities that ultimately make the experience of running in the mountains more freeing and creative. However, scrambling isn’t a necessary skill for recreational or even competitive mountain running. Personally, I’ve never run a race that even has Class 3 terrain required. Speedgoat doesn’t qualify. Virginius Pass on the Hardrock course is probably the closest to being Class 3, but I think that is debatable.

However, especially with the rise in popularity of fastest known times (FKTs), it is pretty easy for the average ultrarunner to be lured into attempting terrain that would never be sanctioned in an official race, and/or simply finding themselves needing to scramble during a backcountry adventure run. For instance, the easiest routes on a few of Colorado’s popular 14ers require Class 4 scrambling.

The problem, however, is that the creep along the spectrum from relatively benign, off-trail travel to hands-required scrambling to technical rock climbing is pernicious. Rock climbing is a nuanced and specific skill that, in reality, has almost nothing to do with running. The boundaries between each activity aren’t clearly defined and are different for every person, but the consequences of straying too far along said spectrum without proper skill or equipment are grievous. I’ve personally spent a decade intentionally trying to blur those lines as much as possible by mashing up a mix of techniques, equipment, fitness and mental approach.

Certainly, this process has not been without its missteps, but for me, the pay-off is worth it. The satisfaction and exhilaration I get from covering a wide variety of complex terrain efficiently, safely and competently probably surpasses any satisfaction I’ve ever felt from winning a race. So, to me, the allure and motivation is obvious. Scrambling is as much a mindset as it is an activity, and that mental shift, in addition to technical competency and comfort on easy to moderate fifth-class terrain, is what distinguishes it from climbing.

However, getting to that point – competency and efficiency on technical ground – has been a decade-long and on-going process for me. This is the aspect of the activity – assiduous development of physical and mental skills – that it seems few onlookers think to consider. Unfortunately, my background as purely a runner combined with the unprecedented accessibility of social media has perhaps given some people the wrong impression. For instance, I regularly get comments or messages asking me about scrambling in Boulder’s Flatirons: Do I need a rope? What shoes do I wear? How do I get down? What formations/routes do you recommend? To be clear, I don’t think it is appropriate to dispense such consequential advice amongst strangers on the internet.

The Flatirons – Boulder’s famous city backdrop and my backyard setting for continually honing my personal skillset for mixing running and climbing – are towering slabs of conglomerate and metamorphosed sandstone all tilted on edge to an angle of 50-60 degrees. That relatively moderate angle combined with generally plentiful holds makes them a real rarity in the world of climbing – they’re steep enough to present as sheer faces, but not so steep as to be in the realm of overly demanding vertical rock climbing. They are the perfect arena for learning and honing one’s scrambling skills at lower elevation – skills that can then be translated and applied in the backcountry – but their convenience also makes it easy for the beginner to get in over their head.

The main crux of the issue is that at the upper ends of scrambling – fourth and easy, fifth-class terrain – what we’re really talking about is technical rock climbing. It’s not hiking and it’s certainly not running, and if you don’t have appropriate protective gear—a harness and rope—it is absolutely free soloing, even if it is being performed in running shoes. It should be treated with the respect that such a high consequence activity deserves.

One recent online interaction really highlighted for me the confusion that can surround these activities. Someone asked what shoes I preferred for scrambling and, in the Strava comment thread, a good buddy of mine (a very experienced, strong climber and scrambler himself) jumped in to comment that when he was first gaining experience in the Flatirons, he found climbing shoes to be the best scrambling shoes since scrambling is a subjective classification for terrain that many would label as climbing.

My buddy is correct, too. Once you’re maybe 20 or 30 feet off of the ground, any mistake is going to have heinously brutal – if not outright fatal – consequences. The more precise fit and grip of climbing shoes can do a lot to improve your margin for error. Still, upon further reflection, I decided that my advice should be even more conservative. If you’re just feeling things out, a rope, harness and knowledge of their function are even more important than the shoes on your feet. That is to say, maybe the best advice is to learn how to climb before labeling entry-level climbing terrain with the downplayed designation of scrambling.

So, that’s my advice. Take it slowly. Ideally – and I’m aware that this may seem like overkill – learn the basics of rock climbing. This is best done with a willing mentor, someone who can teach you the protective systems and techniques of ropes, knots and harnesses that allow you to build experience with technical movement without serious consequences if you fall.

Developing comfort and aptitude on technical, high consequence terrain is like anything else – it takes practice and repetition. Logging significant roped climbing mileage will give you a sense for what your limits of strength and skill are and how you react to exposure and being high off the ground. It will also make it easier to safely stay within those limits when out on a run in the backcountry and consider the terrain before you. It’s a total pain and certainly changes the nature of an outing, but when attempting something technical for the first time, strongly consider bringing a partner, a rope and a rack.

Which brings me to the second element of negotiating technical terrain (the first being your strength and skill): evaluating the situation. Terrain with exposure and technical movement ratchets up the importance of identifying and considering all of the other X-factors. What’s the quality of the rock? If that hold breaks, will you fall? Is the rock wet, mossy or dirty? What’s the weather doing? Is it windy? If you embark on a slow, technical section of exposed terrain will a storm blow in and completely change the conditions? Will you be able to reverse/downclimb all of the moves that you make forward/up? There’s a lot to think about. Choose your future carefully.

In my progression over the past decade-plus, I have somehow survived many of the mistakes that one associates with technical terrain. I’ve triggered and been swept by an avalanche high on a 14er. I’ve fallen 800 feet down a couloir while ski mountaineering. I’ve climbed into positions – both solo and unroped – that, when panic threatened to rise, if I had not been able to stay calm and pull the moves, I would’ve fallen to certain death.

Don’t do those things. Developing new skills is exciting and empowering and in the case of scrambling and mountain running, can provide an entrée to entire new spheres of movement and meaningful experiences. Proceed with caution.

Anton Krupicka ran his first marathon in 1996 and first ultramarathon in 2006. In addition to running, he is a fervid climber, cyclotourist and backcountry skier living in Boulder, CO.