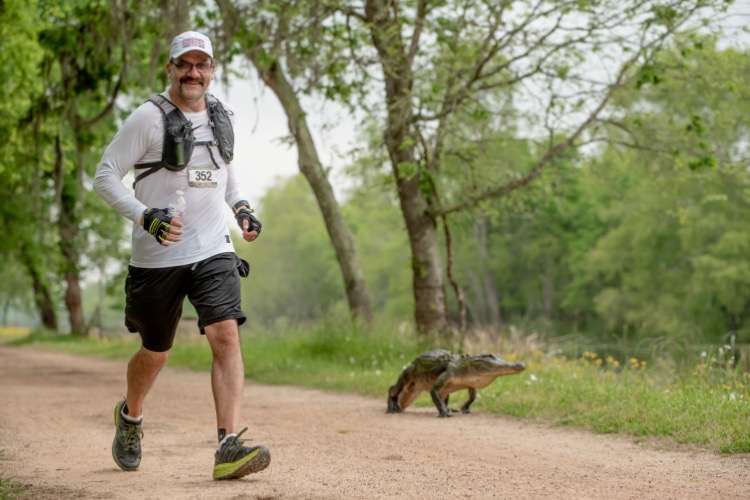 Running with the gators at Brazos Bend. Photo: Jeremiah Justis

This article was originally published in the September/October 2022 issue of UltraRunning Magazine. Subscribe today for similar features on ultra training, racing and more.

Unless you’re in the Southern Hemisphere, the end of the calendar year brings colder temps, shorter days, rain and perhaps snow. Between Thanksgiving and January, I tend to run less and sleep and eat more, as if transitioning to hibernation. Summer fitness, honed from long days in the high country and training for a goal 100-miler in July, starts to soften. It’s time to get the skis out of storage and reduce running to a minimum for a month or so.

But wait—I have one last ultra of the year on the calendar to get my rear into gear. One last hurrah to challenge my legs and lungs to run hard before taking a holiday-oriented break.

Almost every year for at least the past decade, I’ve planned a special late-year ultra as a season-ender. It’s a way to celebrate a year of running before putting long runs on hiatus, taking a break from structured run workouts to recharge mentally and physically, and then ramping up training again in mid-January for the first spring ultra.

In 2020, I deviated from this seasonal pattern and suffered the consequences. Instead of reducing running in December and early January as usual, I trained through Colorado’s cold and snow for the 2021 Coldwater Rumble 100-miler in the Arizona desert in mid-January. I blame it on the pandemic for creating a pent-up urge to reconnect with other runners after so many canceled events. The problem was, I felt fatigued and discombobulated after the first 20-mile loop.

I, therefore, recommend a “last hurrah” ultra in November or December, then a recovery break of at least four weeks—maybe longer—during which you run by feel and for fun, rather than by schedule, and significantly reduce the duration of long runs.

For those of you looking to cap your year with a satisfying ultra, I recommend the following races in November and December:

RIO DEL LAGO (100M OR 50K): Held the first weekend in November, Rio Del Lago is one of my favorite Northern California events, as it overlaps with parts of the American River 50 and Way Too Cool 50K routes north of Sacramento, but avoids the worst of that region’s hottest months. It was my first 100-miler and I’ve paced several friends there, so I’ve witnessed how well-organized and supportive the race is. RDL also is a “last chance” race to snag a qualifier to enter the Western States lottery the following month. The 50k option is new this year.

DEAD HORSE (50M OR 50K): Typically the Saturday before Thanksgiving and named after the state park in Moab, this popular race by Mad Moose Events showcases some of the best views and slickrock terrain around southern Utah. Weather-wise, November is an ideal time to visit Moab.

QUAD DIPSEA (28M): Held north of San Francisco on the Saturday following Thanksgiving, this race barely qualifies as an ultra. But what it lacks in mileage it makes up for with difficulty and a festive atmosphere. Runners sweat off their Thanksgiving indulgence by doing the famed 7-mile Dipsea Trail four times, passing each other in two-way traffic that makes for good camaraderie and competition.

I asked a couple of ultra friends for their personal recommendations, and they shared these:

HELLGATE 100K: Held in her hometown on the second Saturday in December, Sophie Spiedel of Charlottesville, Virginia, has finished Hellgate a hellish 11 times and loves it. She says it has the epic feel of a 100-miler in precisely 66.6 miles. The race starts at midnight, so everyone must manage the first 7 hours in the dark.

“My finishes have been in every weather imaginable, from classic Virginia sleet and cold rain, to several inches of snow, to 60s and sunshine,” says Sophie. “I call it a ‘final exam’ because it truly tests everything: weather and gear prep, nutrition with a midnight start, fitness and durability after a year of racing, and of course, running the first 50k on rocky, leafy trails in the dark.”

BRAZOS BEND: Featuring multiple distances from 100M to a half marathon on the first weekend in December, runners love this flat and fast course at a state park in Needville, Texas, to set a PR. Says Thomas Fons of Texas, “The support, aid stations and attention to detail supporting the runners is second-to-none. Trail Racing Over Texas does two races a year on this course, and has for about eight years, so all kinks have been worked out.”

And for those of you who want to ring in the new year with an ultra:

NEW YEAR’S ONE-DAY (6, 12 AND 24 HOUR): I ran this once, made it 115 miles, and vowed never to repeat that loop again. But my friend Jennifer O’Connor, who lives in the Bay Area, has done the 12- and 24-hour versions multiple times. The course is a flat 1-mile rectangle on the San Francisco waterfront area known as Crissy Field.

“I see the New Year’s One-Day as a special way to both cap off the year and start the new year right,” says Jennifer. “It gives me a chance to reflect on how the year has gone and what I want to accomplish in the coming year. I also like that the format has allowed me to share the event with my daughter.”

ACROSS THE YEARS: Spanning six days (December 28–January 3), in a festival-like setting at the Camelback Ranch baseball park near Phoenix, Arizona, Aravaipa’s Across the Years inspires runners to go as long as they can—or at least, as long as they like. Says Oregon ultrarunner Peter Beck, “I’ve done both the 24- and 72-hour races, but there are a bunch more. All of them start in one year and end in the next. It’s fun to toast the new year at midnight, in the middle of a race, and then head back into the wee hours of night for more miles.”