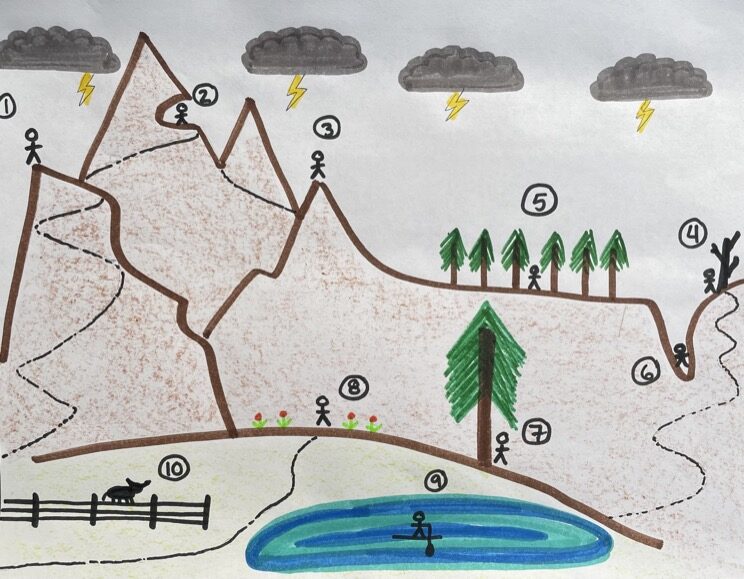 This article was originally published in the July 2022 issue of UltraRunning Magazine. Subscribe today for similar features on ultra training, racing and more.

If you’ve ever thought to yourself, “There is no safe place outside in a thunderstorm,” you’re correct. And if you shouted the safety mantra, “When thunder roars, go indoors,” even better. If you can hear thunder, you can be struck by lightning. No need to count between flashes of lightning and thunder bangs and remember any numbers. So, what should you do when you’re out on the trail or in the middle of a race during a thunderstorm?

FIND A SAFE PLACE
Being inside a building or a vehicle is the only safe place to be when you hear thunder. Sadly, picnic shelters and aid station tents do not qualify as buildings. They will not protect you from being injured by lightning. If you’re at an aid station during a thunderstorm, get into somebody’s car.

According to the National Weather Service, about 24 people are killed annually by lightning in the United States. Those seem like pretty good odds for a trail runner, but up to 10 times as many people are injured by lightning every year. These injuries range in severity, but many could keep you from ever lacing up your running shoes again.

If you hear thunder and you can’t get to your car or into a building, head for the safest terrain you can find. Remember, you don’t want to be the highest thing around and you don’t want to be near the highest thing around. Along the route pictured, running toward the treeline and moving down into the trees is safer than anywhere that might be higher (stick figure 5). And you’d be safest staying in the trees for 30 minutes after the last peal of thunder.

A dry ravine (stick figure 6) is a relatively safer place too, but remember, ravines seldom stay dry during thunderstorms and water is a great conductor of electricity.

DANGEROUS PLACES
All of the other stick figures in the picture, along with the stick cow, are in much less safe places.

While we all know being high on a peak or ridge (stick figure 1 and stick figure 3) is perilous, a lot of runners might think taking shelter in a shallow cave or under an overhang (like stick figure 2) is a good idea. They would have protection from wind and rain, but not from lightning. Energy from lightning will travel along rock surfaces as it moves toward the ground. It can injure anyone on or near its path. Again, in this scenario, it is better to keep moving towards the treeline.

Large trees don’t offer any protection from lightning, either (see stick figure 7). In fact, while they may keep you dry, lone tall objects are much more likely to be struck in a thunderstorm. The current can travel through the ground, or it can jump from the object over to you. This is called splash lightning. Over half of lightning injuries are due to ground current and about a third are splash lightning injuries. The risk of a ground current is also what makes open terrain like meadows so risky (stick figure 8). Water and metal are wonderful conductors which unfortunately puts the SUP (stick figure 9) and the cow (stick figure 10) at great risk.

LIGHTNING POSITION
If it is too dangerous to move to safer terrain, stay put and try to insulate yourself from ground current. Sit or crouch on your hydration pack and minimize how much of your body touches the ground. Don’t lie flat. The ground current will cause more significant injuries as it moves from your head to toes, or vice versa, in that position.

No position will make you safe from lightning. At best, “lighting position” will decrease the consequences of lightning moving through you. It’s a last resort when the risk of moving to safer terrain is greater than the risk of staying put.

If you are running with a group and you cannot move to safer terrain, everyone should put as much space between themselves as possible before getting into the lightning position. How far you spread out depends on terrain hazards and the ability of the group’s members to stay warm and not get lost. If you have trekking poles, the metal is a great conductor, so don’t hold them in your hands.

PREVENTION
We’re not usually surprised by thunderstorms, or at least we shouldn’t be. Most mountain areas have predictable storm patterns. If you’re training or racing in the mountains, research these patterns and plan around them. Set start and turnaround times on training runs that will get you to safer terrain when storms are likely. Choose races that have cutoffs that allow racers to get to safer terrain and wait out thunderstorms.

Most runners end up in hazardous situations because they do not realize that thunder is the sound of air expanding around lightning. They continue to move along an exposed route because they simply do not recognize the hazard. Thunder means lightning. When you hear it, quickly move toward safer terrain. Race directors can help mitigate lightning risk by emphasizing this point during the race briefing. They can also review where safer terrain is along the race route. Aid station volunteers who have taken a Wilderness First Aid course will be especially good at making decisions about lightning risk, as well as treating any injuries.

Liza Howard is a long-time ultrarunner and harried mom living in San Antonio, TX. Her racing highlights include winning the Leadville 100 twice and winning the USATF 50-mile Road Championships in 2017 and the 100k in 2018. She divides her time between teaching for NOLS Wilderness Medicine, directing the Band of Runners non-profit and coaching for Sharman Ultra and being a busy mom.