Latoya Snell: Inspiring Others to Invest in Themselves

Sponsored by HOKA ONE ONE®

HOKA ONE ONE® produces premium performance footwear and apparel for athletes of all types. With a bold and unexpected approach, and a focus on amplifying all voices and telling the stories of athletes from around the world, HOKA empowers everyone to feel like they can fly. Visit hokaoneone.com and follow @hokaoneone for more stories like Latoya’s. It’s Time to Fly™. #timetofly

On a chilly, fall morning last October, in the desert northeast of Phoenix, Arizona, nearly 700 eager ultrarunners toed the start of North America’s largest 100-miler, the Javelina Jundred. In just her fourth ultra, 34-year-old Latoya Snell was ready to take on her longest distance yet.

Snell didn’t make it to the finish line that weekend, along with nearly 250 other participants that DNF’d (did not finish) on the deceptively demanding course, but her experience built upon her finish from the previous year in the 100k distance. One hundred miles was a leap in distance and faith she had to take, not only for herself, but for the thousands of other new runners she hopes to encourage to try the sport of ultrarunning.

“A lot of people need to be able to see different versions of themselves,” Snell said in a recent interview from her home in Brooklyn, New York. “It’s not just about racing.”

For Snell, she knows if she saw a Black woman running trails at a younger age, she would have been interested in the sport much sooner. The power of visual representation has the ability to change lives and certain perspectives we hold not only in the world, but in sports like running.

“I made it to mile 21 at Javelina and I had to pull out, but everyone cheered for me just as hard as if I was the first-place winner,” Snell recalled fondly. “People desperately need to experience these tribulations. They need to be able to hear about these stories — to hear that they are going to be celebrated regardless of what place they’re at. They need to know that they matter. It’s not as complicated as it sounds.”

Taking on risks and leading by example in her true, authentic self is Snell’s way of promoting ultrarunning in her community, much of which has turned online since the start of the pandemic but in ways, still feels like a close-knit family. 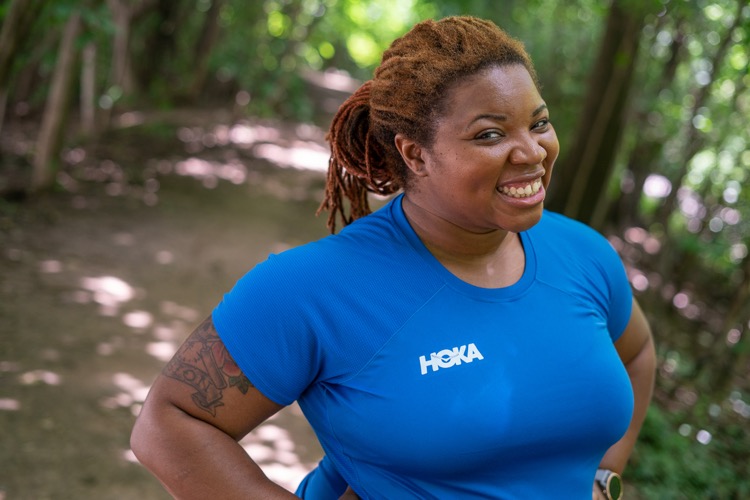 “I have a stronger sense of community more than ever before because of COVID-19. I’ve been able to connect with my community online. A lot of people are depressed,” Snell said. “To be able to connect with people in Sweden or France, in different areas around the world, and hear what their experience is like going through a pandemic, you actually start to feel less alone. These people gave me the courage to get moving, even if I was stuck inside my house.” Since the pandemic was particularly devastating in New York, Snell didn’t leave her house during the spring and turned to cycling on an indoor trainer for workouts in lieu of running on the streets of New York.

“It kind of pushed me into the position where it’s like the real race that I was dealing with was everyday life.” Snell elaborated, “Mentally it’s a battle and a struggle when you go from loving and embracing the outdoors and trying to get people, recruit people, to be with you. To the point where you’re instantly discouraged to even get outside.”

“I am looking at it now that I’ve had a couple of months of processing everything as a way to start over and almost redefine my ‘why.’ It’s something that I’ve done on a regular basis; every year I have a different reason for getting out and moving.”

In 2020, her motivation for running has evolved unexpectedly as she, like most of us, had a robust race calendar scheduled. Instead, she’s focusing her energy on bringing more people into the sport she loves that perhaps thought of ultrarunning as a sport for the privileged or elite.

“Most important is to show that diversity in sport and share narratives of those striving to be their best, not just put up a picture and think that’s the end all be all. Truly learning about athletes of all types training and their motives with care in building a long-term relationship. Representation truly matters,” she said.

“Bring it to them,” Snell said bluntly. “People cannot be interested in something they don’t know about or think that they are not welcomed to.” 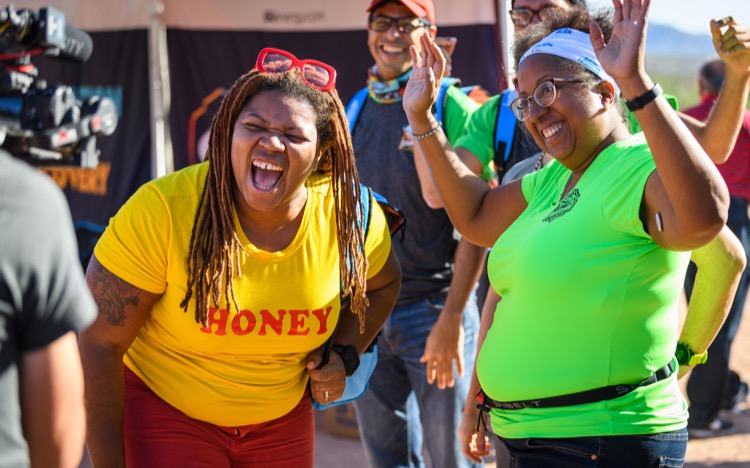 Latoya cheers on runners at the 2019 Javelina Jundred in Arizona. Photo: Howie Stern

Although she has more road running experience, she’s found that the ultra community has embraced her. For her, there’s something about the smaller community and it’s not that they just say it, but that they show their enthusiasm for new people to be there. “It’s that you can feel that most people don’t care what your background is, they are happy you’re there sharing the experience with them,” said Snell.

She remembers her first ultra experience and another runner asking, “Where do you use the bathroom?” “The bathroom is outdoors,” she laughed. “But when you can be that intimate and raw with a complete stranger, it sets the bar a lot higher for everyone involved.” She admits coming home after the Javelina Jundred last year made her melancholy. “Access is hard for the trails in New York City. It makes me miss the outdoor space and people more and more.” The outdoors are now a second home for Snell.

“At some point, everyone walks.” This simple statement from a fellow ultrarunner at one of her first events made Snell feel welcome from day one. She knows that she doesn’t have to fit a certain narrative or look, all ultrarunners walk at some point — it’s a leveling fact that keeps her humble as she continues to develop.

“We’re all reminding ourselves of why we’re doing this. It’s much more than celebrating my movement. I want to be able to celebrate my life with others and I want to be able to still bring in that joy and remind people of why we move,” she continued. “It doesn’t have to look like the next person, but if I can get and recruit at least one person to move with me, even if it’s in the virtual setting, then that’s a mission accomplished and that’s more beautiful to me than any race medal.”

In her own running, Snell recently turned a corner and started training again, with hopes of toeing an ultramarathon starting line once it’s safe to do so. “What I love about races is I was able to meet different people and learn about their backgrounds. To be able to learn about them, simply through moving, is a beautiful experience.” She plans to run multiple 100-mile races, perhaps even a timed event on the track in the future.

Despite the many obstacles we’re facing as humankind, Snell remains resolute in her beliefs that we are evolving creatures and that each generation has had to adapt to something. “But people are very resilient,” she says, “and when you think about training itself, training is really a metaphor for inserting all the hiccups that come along with life; there are going to be good days and bad days.”

Snell’s advice to get through those low moments is, “To continuously invest and believe in yourself.” Although she admits, “It’s probably one of the hardest tasks that most of us can ever do. We’re great motivational speakers for other people, but the ways in which we speak to our own reflections, it can be so depreciative that you stop seeing value in yourself.”

Certainly, each of us must do things to help build each other up, but Snell knows that we also have to take risks to stay invigorated. “We have to shock and wow ourselves every single day, not grandeur for other people, but wow ourselves for ourselves.” By doing this, we can reshape the narrative of each pursuit. “I want to sign up for this event because I want to shock myself and see how far I can take it,” she continued.

When we think about being ultrarunners, many of us realize the imperative of trusting ourselves and embracing the fact that there are going to be tough times ahead. “Don’t try to find the shortcut,” Snell said, “When we look for that shortcut, sometimes we’re taking the long way around.” She learned a similar lesson in her previous life as a professional chef.

“‘Do it right, or do it twice,’” Snell quotes from the culinary world. “Do whatever you have to do and go through the battles and be honest about how you’re feeling. If today sucks, let it suck. But what can I learn from it? Even the hardest things can give you a teaching moment. The beautiful part about being in the ultra community is that I’m able to be a teacher and student. By showing up, I give permission for others to show up. As a student, I get to learn from others that might have something completely different to offer to the table. That’s what I truly love about the ultrarunning environment; beautiful things can blossom out of terrible things and we’re all in this together.”