A decade ago, at 42, Kami Semick reached the pinnacle of ultrarunning. She won every race she entered in 2009, including two world championship events in the 100k and 50k, and earned UltraRunning’s Ultrarunner of the Year title for the second year in a row.

But five years later, she called it quits and disappeared from the sport.

Her breaking point came at The North Face Endurance Championship 50-miler in San Francisco, a race she’d won in 2008. At that event in December 2014 where she finished 17th female, “It felt like I was dragging a load of bricks around,” says Semick, now 52 and living in Bend, Oregon. “The only reason I finished is because I promised myself this was the last time I was going to run 50 miles. I wasn’t coming back because I felt so horrible. I shook hands with [my sponsor]The North Face and said, ‘Nice knowing you, but I gotta stop.’”

Fast forward another five years to now, and suddenly, Semick’s name is popping up again. Eschewing attention-seeking social media posts, she quietly and cautiously began running longer distances again in 2017. She finished two 50-milers and a 100k in her home state last year, then won a 40-miler and 50k in California. Now she’s getting ready to line up at the hyper-competitive Lake Sonoma 50 in April, and the Lavaredo Ultra 120K in Italy in June.

While those newer to the sport might not even recognize Semick, those of us who began ultrarunning in the mid-2000s probably share my excitement at seeing her return. Personally, I’ll never forget The North Face ad campaign from 2006 that showed Semick trail running with her then-4-year-old daughter strapped onto her back. Semick’s muscly physique, fast times at races, and gutsy combination of running and parenting gave female ultrarunners a powerful role model.

I reached out to Semick to find out what happened, and what it’s like to return to the scene and get ready to race again after a long break after turning 50. She agreed to talk, but with some reluctance as part of her looked forward to showing up to Lake Sonoma without being recognized.

“If nobody knows I’m there [at a starting line], I’m so happy about that, because then there’s no expectations,” she says. “I’m trying not to be attached to my history as a runner, and I don’t love the spotlight, but the reason I wanted to talk is because I’m curious about other women’s experiences. If I can share my story, then maybe we can join together as women in our 50s and say, ‘Yes, it’s hard.’ … I feel like we have to band together [for support].” 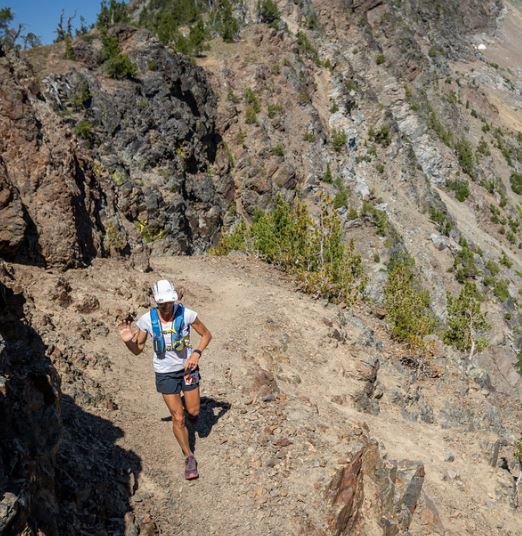 From Top Competitor to Sick and Tired

The turning point in Kami Semick’s ultrarunning career came in 2011, eight years after she ran her first 50k.

Semick had been a cross-country runner at the University of Alabama, but she didn’t get the ultrarunning bug until her late 30s. She finished her first ultra at age 37, the Siskyou Out Back (SOB) 50k, second in 4:54. Her running resume includes numerous wins, including five at the Miwok 100K. She ran her first 100-miler, Western States, in 2006 and finished fourth. Four years later, she set a 100-mile PR at the Vermont 100 in 16:42, first female and third overall.

She also ran road marathons, winning the 2008 Portland Marathon in 2:45:54, and raced internationally winning both the IAU 100K World Cup in Belgium and the IAU 50K World Championship in Gibraltar. In 2010, she placed fourth in Comrades in South Africa. In addition to twice earning UROY, she was named USATF’s Ultra Runner of the Year in 2009 and 2010.

By 2011, Semick still ran at the top of the sport and was peaking physiologically—but midway through that year, she felt worn out and sensed she needed time off to rest. In addition to competing in two road marathons in early 2011, she had raced closely with rising star Ellie Greenwood in three epic races, three months apart: American River 50 (Ellie finishing first, Kami nine minutes behind in second), Comrades Marathon (Kami third, Ellie six minutes behind for fourth) and Western States 100 (Ellie first, Kami 22 minutes behind for second, their race to the finish infamously interrupted by encountering a mama bear and cubs on the trail; the following year, Greenwood set the still-standing course record of 16:47).

When I contacted Greenwood and asked her to recall what it was like to race with Semick that year, she described Semick as a “hugely influential” mentor and competitor, “She showed that women’s ultra racing could be fast and competitive,” Greenwood added, “and she very much comes across as a strong woman who does not let gender limit what she can do.”

In August 2011, Semick and her husband moved with their daughter to Hong Kong to work in technology. She intended to take at least a full season off from ultrarunning to give her body a break, but she discovered a vibrant ultrarunning community in Hong Kong and felt compelled to keep racing for her sponsor.

“Working with The North Face in Asia gave me the opportunity to connect with ultrarunners in China, Taiwan, Singapore and Nepal, and I loved getting to know these running communities and individual runners. And, I kept running to stay sane,” she recalls. “My family was living in a high rise, and I was working for a tech company in one of the most densely populated areas of Hong Kong. I felt completely disconnected from nature. From my apartment, I had about a 1.5-mile run uphill to hit a trail that would take me to the interior of Hong Kong island, and that became my solace, my time to see the green of trees, catch a beam of sunlight, and maybe get some dirt between my toes. I craved dirt.”

While living in Hong Kong, Semick says she had some good races in the region, “but my highs were never that high, and my lows kept getting lower. Energetically, I just went downhill and dug myself into a hole. I felt cranky, achy and tired most of the time.” Blood tests revealed low thyroid function plus intestinal infections requiring multiple treatments with antibiotics.

She blames her decline on a combination of “the stress of living and running in a completely new environment—going from rural, dry and relatively cool Oregon, to one of the most densely populated cities in Asia with extreme heat and humidity—to not taking a break when I should have, to constant GI infections, to hormonal fluctuations due to aging.”

Given the opportunity to stay in Hong Kong or move back to Bend in 2014, Semick and her husband chose the latter. “Pollution was a major factor. Most days in Hong Kong, the air particulate count was far above safe levels for healthy and I could feel it in my lungs. Our daughter became an indoor kid.”

Semick then re-entered the West Coast ultra scene but that December, she ultimately confronted the reality at her worst-ever 50-miler that she needed and wanted a break from the sport. Not only did she disconnect from her sponsor, but she also resigned her position on the USATF’s mountain/ultra/trail board, and took the plunge into something else entirely: starting her own company called Food4All.

“I need big goals, so I threw myself into Food4All, and that has been really healthy for me,” she says. Her startup, she explains, offers software to farmers so they can sell direct to their local community online. “Our objective with Food4All is to create more sustainable food systems by directly connecting food producers with their local community.”

Living in Hong Kong inspired her because of their reliance on imported food, whereas in Oregon she owned a few acres of land and cultivated much of her own food by gardening, raising chickens and harvesting fruit. “Once I returned to Bend, my Hong Kong eating experience reinforced my belief I needed to eat as locally as possible and know the farmer or rancher who produced the food, and then I wanted to make it as easy as possible for farmers and buyers to connect locally.” 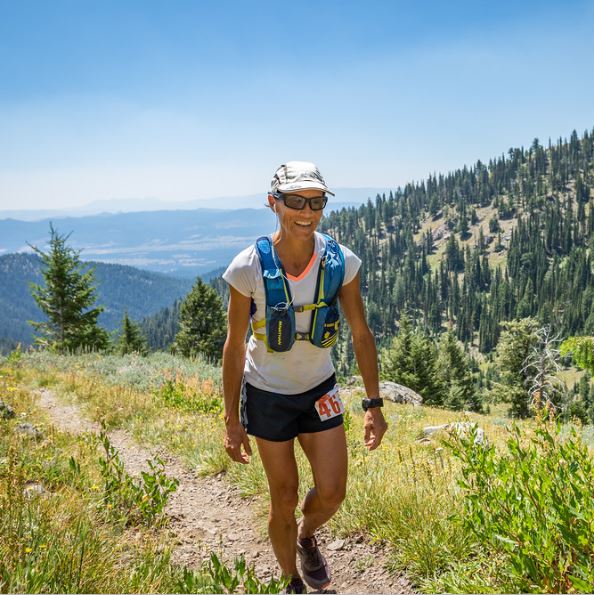 A Renewed Sense of Fun and Adventure

Asked about her goals at the upcoming Lake Sonoma 50, Semick says, “I really just enjoy the process [of training]—I’m back in my happy place. I’ve got to fit in a couple of back-to-back 25-mile runs, which is what I’m building up to now, and it feels good again.”

Rather than stating a desire to place in the top 10 or finish by a certain time, she wants “to see the terrain and enjoy the wine. It sounds great to run 50 miles and then relax in the wine country for two days.”

Looking ahead, does she plan to return to 100-milers? “I do see myself working back into the 100-mile distance, but doing different types of 100s,” she says. “I’m changing the types of events I’m running. Miwok, Comrades—I was always attracted to those events because they’re very runnable and because of the faster-paced effort. Now I want to do events that involve a lot of climbing and technical terrain, changing it up because I don’t feel the need to run fast. I have that sense I had when I first started, which is the sense of adventure, and I just want to stay with that and enjoy it.”

When asked if she has tips for women who want to keep running well past 50, Semick offered the following:

My personal journey into my 50s has been a bit of a wild ride. Sometimes I think, really? I don’t need to list all the symptoms for my fellow ladies in their 50s, but suffice to say the list keeps getting longer. Here’s what I’ve found helps me manage:

Sarah Lavender Smith is an ultrarunning coach, writer and mom of two who divides her time between the Bay Area and southwestern Colorado. She is the author of the book, The Trail Runner’s Companion: A Step-by-Step Guide to Trail Running and Racing, from 5Ks to Ultras. Follow her blog TheRunnersTrip.com.