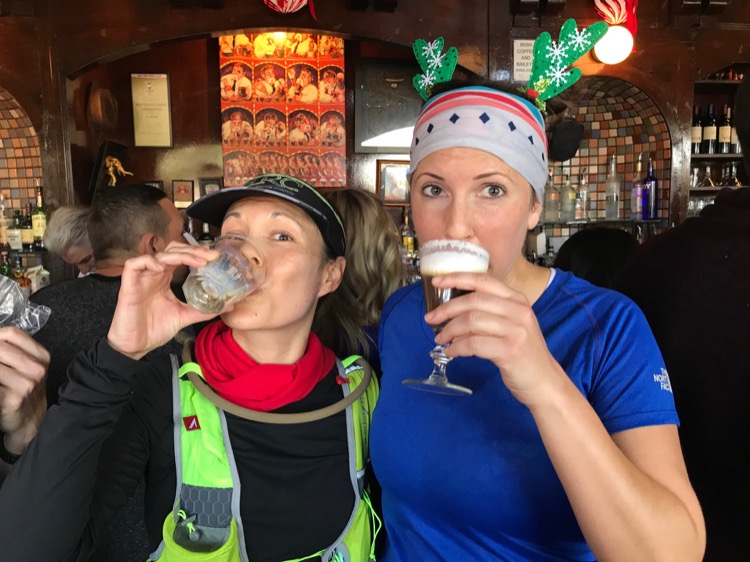 “My blister is now wrapped around my entire toe,” I said to my friend Karen. “I wish I’d thought to bring my blister kit.

“Do you have any toothpicks?” she asked. “You could just lance it with a toothpick.”

“But that’s not really sterile,” I replied. “I don’t want to get an infection.”

“Don’t you have a cigarette lighter in your car?”

“So I can cauterize the toothpick laceration?”

This was a conversation between me and my running buddy shortly after mad sprints across two four-lane highways, with cars whizzing by at speeds of 50 to 60 mph. Luckily, the blister ended up taking care of itself by popping in my shoe as I ran, so the need for toothpicks and a cigarette lighter never came into play.

We were on the course of the 33rd annual Hunter S. Thompson Fear & Loathing 50-Mile, an ultramarathon that roughly follows 49-Mile Scenic Drive through the city streets of San Francisco. It starts and ends at Twin Peaks, one of the highest points in the city with stunning views. The only rule of this particular race is to “not get hit by a car,” something all runners must take to heart as they race against traffic lights and trot along in the margins of busy roadways.

The F&L 50 “savage journey” is a fatass race, meaning it’s an unofficial, unsanctioned race. There are no course markings and no nice police officers to put up road barricades or hold up traffic so you can safely pass through the streets. There are faded 49 Mile road signs posted along the route, each of them printed with everyone’s favorite scavenger of the sea: the seagull. The seagull signs serve as a beacon to those daring enough to take on this course. But with the course not adhering strictly to the route, along with some signs missing or spaced far apart, the seagull isn’t a 100% reliable course marker. 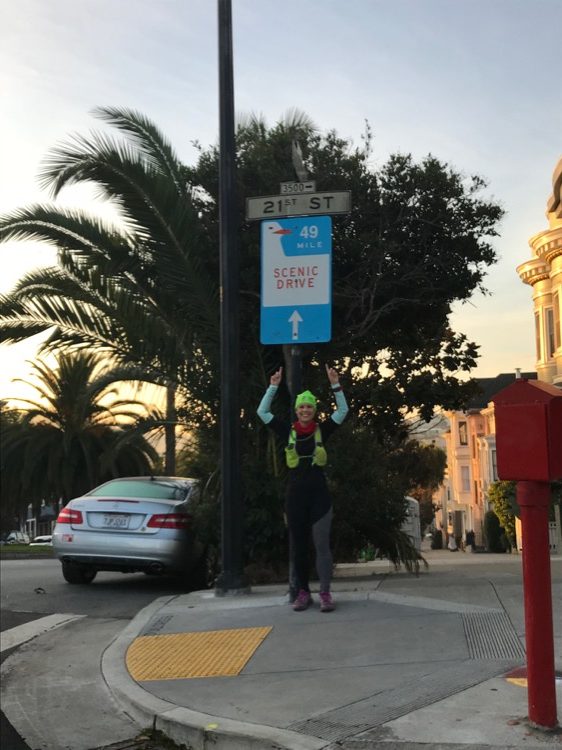 It would be an understatement to say I’m directionally challenged. When signing up for the race, I knew there was a good chance I’d end up in Oakland if I wasn’t prepared. So I spent time studying the course, preprogrammed my GPS watch, and had three pages of turn directions silk screened onto arm sleeves.

Despite all this, I lost count of the number of times I took an unexpected detour. At one point, my friend Jordan and I found ourselves in a deserted ship yard. (The surrounding barbed wire fence was a sure giveaway we’d missed a turn somewhere.) Another time, we ended up in a bar taking shots. (Okay, maybe that was an on-purpose detour. Buena Vista bar in North Beach is not to be missed!) Golden Gate Park was a confusing crisscross of switchbacks, especially in the dark.

The other fun aspect of fatass races is the existence of “possible” aid stations, which consists of kind runners donating their weekend and the trunks of their cars to the event. In other words, there are no guaranteed aid stations, so runners need to be prepared to fuel themselves, even if that means dashing into convenience stores with a credit card to load up on Snickers and Gatorade.

Because of the unknown status of aid stations, I enlisted the help of my husband and daughter to man a mobile aid station in the back of the car. I plotted out fun spots for them on the course to meet me, including such places as Coit Tower, Land’s End Lookout, Palace of Fine Arts, and the Bison Paddock in Golden Gate Park. The two of them stayed with me for the entire day. They even made runs for hot food, bringing me potato wedges and a slice of pizza as big as my head. (I felt a little like Dean Karnazes, jogging down Sunset Boulevard with a giant wedge of pizza jammed into my mouth.) My daughter laced up her shoes and ran short sections with me.

One of the highlights of the day turned out to be SantaCon. This was a phenomenon unbeknownst to me before race day. SantaCon is a citywide drunk fest, wherein participants get dressed up in Santa costumes and spend the day consuming as much alcohol as possible. There were Santas in bars as early as 10 a.m. We saw Santas playing basketball and even met a group of motorcyclists dressed up in costume to celebrate the day. Not only were we dodging pedestrians and cars in North Beach, but we now had Santas thrown into the mix. It was a hoot, to say the least. 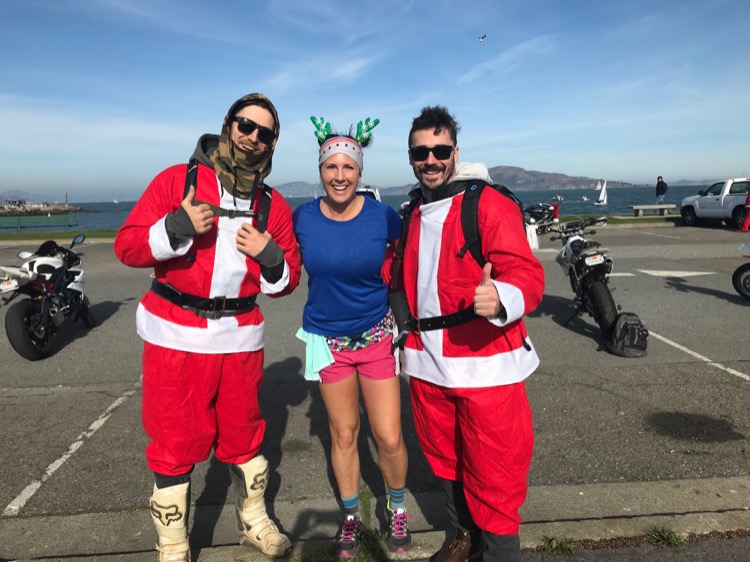 The 25-mile mark has a cutoff time of 4 hours, 45 minutes. Though I trained meticulously and knew I could run the requisite 25 miles in under 4:45, it didn’t happen on race day. Most of the getting lost happened in the first half of the race. That, coupled with traffic lights, people-dodging, and yes, one on-purpose detour to Buena Vista Bar for shots, I missed the cut off by a full hour.

My husband knew how much I wanted to run the full 50 miles, rather than be detoured to the 50k. He talked to the course monitor, who agreed to let me continue on the course since I had mobile support.

Waiting for me at the top of Twin Peaks, cuddled under a blanket and soaking in a stunning night view of city street lights, were the two most important people in my world: my husband and daughter. We gathered for hugs and pictures with my two running buddies who had kept me company during the race.

It was 7 p.m., an hour past the official 11-hour end of the race. Though I missed the official cutoffs, I could not be happier with my 12-hour finish. Nothing can take away the 50+ miles I traversed that day through one of the most amazing cities in the world, nor the memories made that day with my friends and family.