Herron and Walmsley named 2017 UltraRunners of the Year 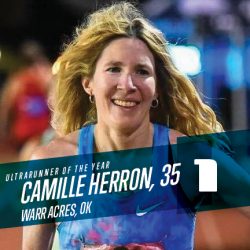 Camille Herron is the female Ultra Runner of the Year for 2017. Herron’s spectacular year included winning the prestigious Comrades Marathon in South Africa and setting a world record for 100 miles with a stunning 12:42:40 clocking at the Tunnel Hill 100. Four weeks after the 100 mile record, she doubled back to set another world record for 12 hours with a 92.665 total, breaking Ann Trason’s 1991 mark. She also showed her versatility in winning the Tarawera 100K in New Zealand and placing second at the Bandera 100K. She lives in Warr Acres, Oklahoma and currently works as a Research Assistant in Osteoimmunology at the University of Oklahoma Health Sciences Center. Photo: Howie Stern 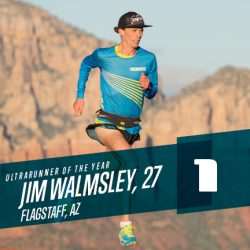 Jim Walmsley is the male Ultra Runner of the Year for 2017. In winning the UROY for the second straight year, Walmsley excited many with his “go big or go home” style of racing. He set course records in winning the Tarawera 100K in New Zealand, the Gorge Waterfalls 100K in Oregon and the Speedgoat 50K in Utah. He suffered a DNF at Western States after surrendering a large lead with stomach issues at mile 70. At UTMB he was in or tied for the lead for 65 miles before experiencing an epic bonk and sliding to seventh place, eventually recovering in the late stages to finish fifth. The former Air Force Academy track standout lives in Flagstaff, Arizona. Photo: Myke Hermsmeyer

Freriks and Dauwalter named #2 2017 UltraRunners of the Year