What an amazing thing it is to be able to run a 100-mile race in January. The whole nation was covered by snowfall with the midwest gripped by a Canadian cold front, and the eastern seaboard bracing for a weekend of heavy snow and wind chills in the negative teens. The weather forecasters on TV in New York seemed giddy with anticipation.

You pretty much have to have a reason to be running a 100 this early in the year. Of course, for the first timers, they couldn’t wait another minute to get their chance at ultrarunning’s iconic distance even though being sufficiently trained at this point in the year is as rare as a unicorn spotting. My own reason for coming to the Long Haul 100 all the way from California was complicated. In 2018, I’d gotten tripped up by every 100-mile snag you could imagine: a late spring blizzard in Minnesota that had perma-frosted all but a handful of finishers at Zumbro, getting lost over and over at Angel Fire, a potentially fatal altitude problem stopped me at IMTUF in Idaho, and I was inadvertently pulled from another race at 90 miles due to a miscalculated cutoff time. I couldn’t catch a break in 2018. I also couldn’t help but wonder if at 66 years old, I was simply over the hill as far as finishing 100-mile races was concerned.

I had so many questions to answer. At my age, could I still go the distance? Was 2019 going to continue my bad luck from 2018? Was I going to bounce back from a hernia operation? Could I still notch a 100-mile finish as a spanking-new granddad? Would I be able to add Florida to my long list of states where I’d run a 100-mile race? 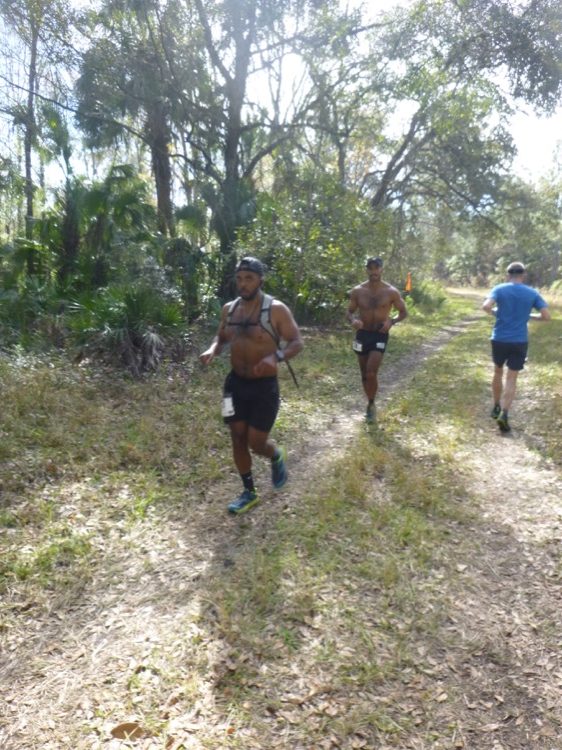 The Long Haul 100 turned out to be perfect for testing out the distance. The race plays out over a 12.5-mile circuit that loops through the Cypress Creek Reserve in Land O’ Lakes, Florida, not far from Tampa. The reserve is a flood protection area of large flatwood prairie land and low-lying swamp. Elevation gain per loop amounted to about four feet, and the course was dead flat with mostly great footing on jeep road and double single track with a bit of asphalt road.

The roughly clover-leaf shape of the course also served to bring runners back to the central point or hub of the race where the key aid station was set up along with a bustling tent city. You could find friends and family once per loop, or you could stop in as you passed by a couple of more times. In other words, drop bags, tent, crew, food and a continual party atmosphere with lots of moral support were never more than a couple of miles away. The volunteers at the two aid stations out on the loops were also masters at charging up the atmosphere with lots of good support, especially in the dead of night when you needed a boost or a grilled cheese sandwich.

The course didn’t need much marking, but was clear where it was needed. A few fun signs had been scattered around to give runners some touchstones, like “Armadillo Alley,” and “The Hall of Pines,” which was a straight section of narrow trail lined with tall pine trees that looked like someone had drawn them up at attention and then forgotten about them.

In short, co-race directors Andy and Amy Mathews have created a wonderfully supportive and fun winter 100-mile race down in this little corner of Florida where you can measure yourself against the distance without having to tackle a mountain range or dance over miles of jutting rocks. The 32-hour time limit also offers a generous margin for first timers and back of the packers. It’s a perfect race for bringing along a crew. There’s no driving over pitch-black, back country roads to find aid stations. Your crew can sit tight at the hub and see the race progress around them without lifting a finger, that is, until you show up and then they can fawn all over you.

I tucked into this race like a lord at a king’s wedding feast, and no whims of the ultra gods popped up to stop me. In fact, the worst of the rain started just as I pulled into the end of a loop and took shelter. My good luck let me change into rain gear before I went back out while most runners were caught out in the rain. I finished with 117 other runners from about 180 starters and was able to answer all my questions with a resounding, yes. Yes, I can still run 100 miles at age 66 in Florida with a repaired hernia. My bad luck seemed to have abated.