Having raced and competed on all seven continents twice now, it takes a lot to impress me when it comes to trying out new events. I’ve seen it all. And not all of it has been good.

Thus, you might imagine my skepticism when some bloke approached me at the start of the 2018 Western States Endurance Run ranting and raving about his event in Australia, the Blackall 100. Come again? “You know, mate, the Blackall 100, on the Sunshine Coast!”

“No, actually, I don’t know the Blackall 100 on the Sunshine Coast of Australia. But it sounds just dandy. Why don’t you send me an email?”

When I found myself on a flight to Australia for the sixth annual Blackall 100, I was as surprised as anyone. The race director, Brett Standring, did send me that email, and proved to be a charming guy (and one helluva salesman). Still, there’s more to a great event than just the hype. I maintained my skepticism.

Of course, part of the challenge of this race was the long flight, in which I managed to pick up a stomach bug. Long flights and illness are not so uncommon. What is uncommon is running a 100k while being sick. But when you’ve traveled halfway around the globe to a race, the stakes are higher. The gun went off and away we went.

Allow me to digress. Everything leading up to the start of the Blackall 100 had been world class. The race is staged in the Blackall Range on the Sunshine Coast hinterland, which was a gathering place for indigenous people over thousands of years, and the race is themed to honor this sacred site. The pathway to the starting festival is lined with eucalyptus branches and leads to a large, open and natural gathering place, where race participants were blessed by “Uncle Al” (an elder whose ancestry is from the area) with a ceremonial burning of gum leaves. So far so good, but staging a nice pre-race gathering is different than staging a great race. 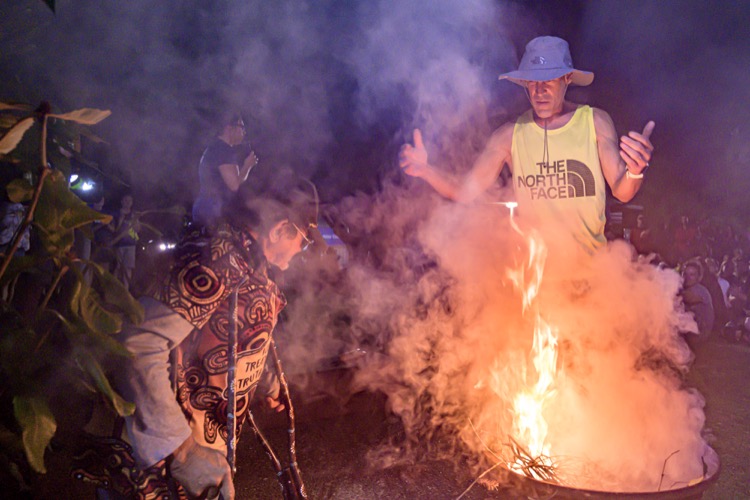 The first couple kilometers of the race were underwhelming. We largely ran on pavement and along a concrete footpath. But soon, things changed. It began with the emergence of towering purple trees called Jacaranda. The colors were mythical, almost too vibrant to be real. Soon we exited the footpath onto a trail. And that’s when the real experience began. We ran through massive eucalyptus forests, past lush and ferny grottos, and through subtropical rainforest filled with all kinds of spiky Dr. Seuss plants only found in Australia. We ran by waterfalls, streams and small ponds. All of it was captivating and enchanting—even the climbs (of which there were plenty).

The Blackall 100 doesn’t feature any particularly long and protracted ascents; instead, it’s a series of never-ending rises and declines that break you down. By kilometer 20 I was already feeling the burn. I hadn’t been able to keep any food down for the past two days and I was already nauseous and dehydrated. This was going to be a long day, if I could make it through.

Coming into checkpoint 3, the food along the course had been only ho-hum—your typical ultramarathon aid station fare and not enough to tempt a man with a stomach bug. A bit of an upgrade, checkpoint 3 was still nothing close to what I was hoping for. I stuck with water and ran through.

But I really needed to eat something. Temperatures were steadily increasing, and the humidity was suffocating in some areas. My body was depleted and these were tough conditions. Worse, it had started to rain. At first it was just a trickle, but soon the heavens parted and a thunderous downpour followed. Keeping pace on some of the rooted and rocky trails was hard enough, but the mud and rain made it even more difficult. My race was slowly unraveling.

Then it got worse. On the way to checkpoint 4, I started falling asleep. The jetlag, sleep deprivation and time zone changes were crushing me. I staggered onward, nauseous and delirious. This was not the race I had planned. I’d scarcely covered half the distance and couldn’t keep my eyes open any longer. 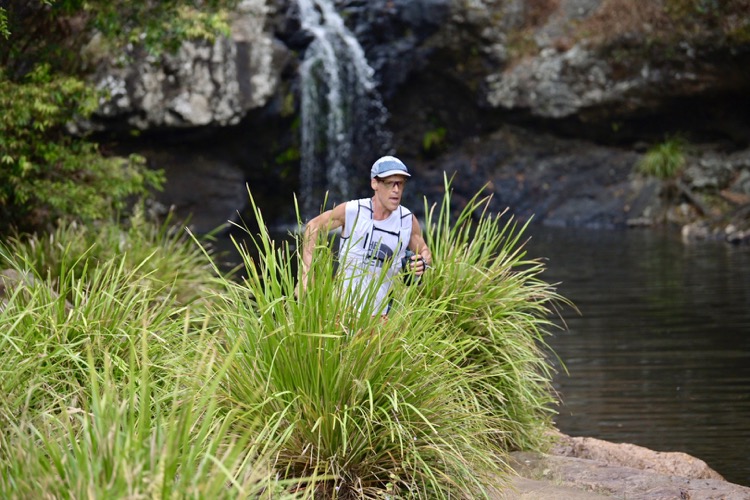 But I hadn’t come halfway around the world to DNF (well, not without some dramatic story, a least). So I made the personal commitment, right there on the trailside at kilometer 48, that I would either finish the race or end up on a gurney. Those were the only two options. Framed in that context, I continued trudging onward. It was a reckless strategy, made in a comatose state of mind, but at least the rules were clear. Finish the race or, well, let’s not think about that.

Arriving at checkpoint 4 was like pulling up a lifeboat alongside a deluxe, five-star cruise ship. The buffet was legendary. This was not a checkpoint, this was Sunday brunch at the Ritz. Every imaginable food choice was available, all homemade and fresh. There were fancy pastries, a wide variety of moist cookies (including a gluten free section), brownies, brownies with nuts, and brownies with M&M’s. There was banana bread, mango pudding, strawberry shortcake and lemon meringue pie. Maybe I was hallucinating; it was all like a dream—a sweet, sweet dream.

The volunteers were tremendous. The rain continued pouring down in torrential bursts, but that didn’t slow them down. They told me they were members of the Brisbane Trail Runners (BTRs) and prided themselves on having the best food at any checkpoint. I thanked them and headed out. It would have been all too easy to sit down and fall asleep.

The next 10 kilometers proved hazardous. The terrain was slippery and wet, and the lowering sun was casting eerie shadows. The rain and humidity created a ground fog that distorted the surroundings and made it hard to focus on any one point. We ran under a canopy of eucalyptus trees with smaller shrubs lining the pathway. Sometimes these smaller bushes blocked my view of the ground. I kept my eyes fixed on the immediate trail two feet in front of me. I tried to stay focused, executing every footstep with precision, but it was no use. The thick, red clay soil was too slick, my senses too dull, when I plummeted face-first into a large puddle of ruddy water. My right hip contacted something solid, like a rock or a root, and my right arm landed in what felt like a pit of gravel. Both were bloodied and bruised. 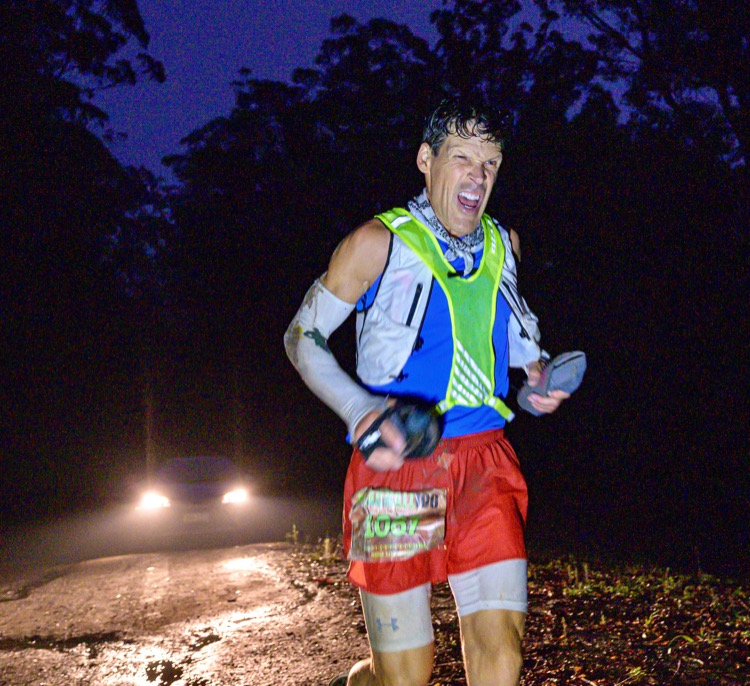 Pulling into checkpoint 5, I must’ve looked like one of those slimy mud salamanders you see on the nature channel. But the volunteers didn’t seem to mind. They took me under their care and washed me down with water and sponges. I’m sure I was babbling gibberish, but they seemed to know exactly what to do. They helped me get my headlamp on and put on my reflective vest. It was now getting dark and I would need them both. Then they started to bandage my wounds, but I was afraid it would take too long and the clock was ticking. The clock is always ticking during an ultramarathon. Despite it being a long race, seconds can matter.

“Are you sure you don’t want some food?” one of the volunteers asked.

I wasn’t hungry, at least I didn’t think I was, until she showed me the food table. OH. . . MY. . . GOD. It rivaled the last checkpoint, though with a different flair. I grabbed a white-chocolate macadamia nut cookie and stuffed it in my mouth. The thing was amazing. I grabbed another and crammed it in the other cheek, using both hands to wedge it in. Crumbs rolled down my chin. I nabbed two more cookies and stuck one in either pocket.

“This food is unbelievable,” I said.

“We’re the Nutrs,” the volunteer offered.

“The what?” Food flew from my mouth as I talked.

“The Noosa Ultra and Trail Runners,” she explained. “The Nutrs. And our food is the best!”

This was war, I guessed, between the Nutrs and the BTRs, for the best checkpoint food. Though it was a good war, the type of battle any ultrarunner could appreciate. Perhaps never in the history of humankind had warfare been so fattening.

With cookie-laden pockets I set back out. There were 30 kilometers left to cover and it was going to take steadfast grunt work to get the job done. My body told me to lie down and rest; but my rational mind—at least what was left of it—said to just keep plodding forward. “ARRR!” I growled. This was my own private war.

To be honest, I don’t remember much of the last few hours of running. I recall more rain, more humidity and more hills. There were frogs on the ground. They weren’t moving, just staring at me with their big, bulbous eyes. I heard strange noises, whistles and chirps. The bush was coming alive. Gothic looking fruit bats darted across the sky, like miniature pterodactyls searching for prey. I remembered the flames from Uncle Al’s ceremonial fire lighting and the way they illuminated the darkness with bursts of yellow and orange. I saw those colors projected on the foliage as I ran past, though it was only my headlamp providing the light. The rainforest was on fire. To keep myself alert, I sang old Aussie songs, either aloud or in my head, I’m still not sure. “Kookaburra sits on an electric wire, jumpin’ up and down ‘cos his bum’s on fire…” 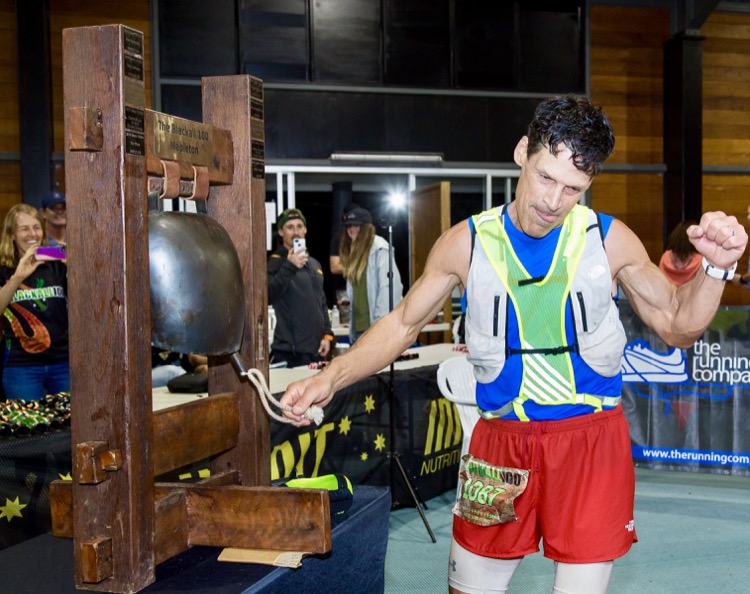 And then the finish chute appeared. It was setup inside the main race lodge at the finish festival. I’d somehow made it. I’d somehow gotten the job done. After crossing the finish line, the massive Blackall Bell was waiting to be rung. And ring it I did, just as every other competitor had done before and after me. It made the most beautiful of sounds, one I doubted at many points today I’d ever be hearing.

Getting to this spot had taken me 15:33, but reach the finish line I did. Sometimes that means more than anything else. The men’s winner—MMA fighter Ryan Crawford—managed to crack 10 hours, bettering his previous year’s time by over an hour and setting a new course record in the process. Veteran Jessica Schluter was the top woman. This was her fifth Blackall 100 and she’s been on the podium every year.

Anyone finishing in sub-18 hours qualified for Western States, and many runners were racing with that hope in mind. Dreams were made and dreams were dashed. Given the conditions, there were a high number of DNFs. Personally, it was a nice bonus to qualify for Western States, but the race experience itself was the real prize. The Aussie spirit looms large at the Blackall 100 and for an outsider, it was all very captivating and magical.

Would I ever return? Heck yes! There’s plenty to see and do on the Sunshine Coast and I’d welcome the opportunity to run the race again. Would I do anything differently? Yeah, I’d bring a bigger backpack. A man could live like a King off that checkpoint food.