After being runner-up in 2016 and winning in 2017, it felt great to be back on the magical start-line of the Canyons 100K in Foresthill, CA. It was going to be a different ballgame this year, however. With the cancellation of Sean O’Brien 100K due to damage from the Woolsey Fire in November, it was decided that Canyons would get (and keep) the golden tickets for the Western States 100. This would all but guarantee a faster race on the front. Furthermore, with the heavy snowpack in the Sierras this winter, the course had to be altered, and a faster out-and-back section was added. Here we go!

Blasting off into the dark up to the first turn on Bath Road, we were clipping right along under 7 minute-per-mile pace. Once we started descending the modified section of the course down to Gorman Ranch, there were quite a few young guns off the front. The masters guys (Ryan Kaiser, Ryan Weibel and I) found ourselves chatting it up while taking full advantage of the “free speed.” Once we hit the bottom, Kaiser shifted into another gear and soon climbed outta sight. The rest of the Canyons 100K field poured down while I made my way back up to the main trail.

Still running under an 8 minute-per-mile average pace by Michigan Bluff, cheers and familiar smiles buoyed my spirit. Up to the turn-around through Eldorado Creek, we started making our way back to the halfway point at Foresthill. Coming down, I catch up with a few guys and come through the half in around 10th place. My race plan was simple – take the first half to warm up and race the second half. I blasted off down Cal Street as 25K runners finished up their race.

Running the Cal St. section in Canyons is such a delight (compared to the horrors of running it during Western States). Here it is at the end of April when temps are reasonable, the aroma of wildflowers is in the air, small streams still run across the trail and the American River is full and flowing. It is definitely something to behold.

After the 50k “warm-up,” I started to feel really strong. Might as well trash the quads on the way down since it’s mostly climbing on the way back up. Through Cal 1 aid station and on to Cal 2. I caught up with Damian Hall (5th at UTMB, 2018) and he asked what place we were in. I guessed around seventh. Through Cal 2 and it’s 7.5 miles to Rucky Chucky (the final turnaround). It felt like forever before the leaders started to appear, and make their way back up Cal St. A quick fill up at the Redd Antler aid station where I enjoyed seeing all my Sonoma County peeps. It’s on – the turn for home! 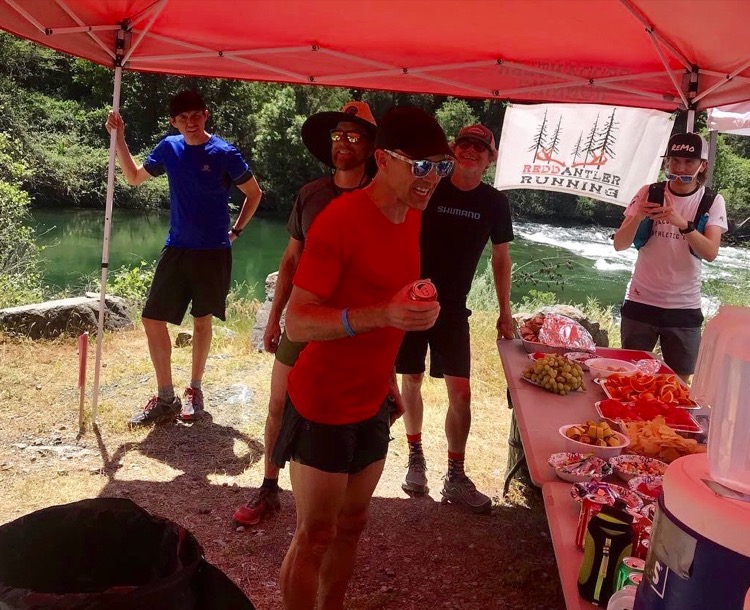 One of my favorite memories at Canyons this year, was a good-size pool of water I submerged myself in – coming and going – between Cal 2 and the Rucky Chucky aid stations. It felt ah-mazing. On the way back up, I was sitting there as a couple of young guys bounded by on their way down. Like some crotchety old man yelling out of his front window, I implored them to stop and cool off. They quickly waived me off and I figured I better get a move on, too.

On the hunt, it took what felt like forever to reel in speedster, Scott Trummer, who had been reduced to “walking-with-a-can-of-Coke mode,” but was still in good spirits and getting the job done. Scott told me exactly what I needed to hear, and I kept on workin’ as hard as my cramping legs would tolerate. “I’m running out of real estate here,” I thought to myself. “Push!” I’d catch up with Robert Ressl-Moyer, and that would be about it. I knew Ryan Kaiser was up there somewhere and that I’d sure like to get him too, so I could win it for the masters division.

Through Cal 2, with just 3.5 to go, my buddy, Luke Garten snuck up behind me while I was hiking and taking in my last GU of the day. Luke was out spectating and yelled, “There’s no walking in ultrarunning!” I smiled and laughed (after realizing it wasn’t a competitor). I still felt amazing and picked up the pace. We ran it up to the pavement, and I made the final right turn home, booking it to the finish and securing fifth place overall at the first golden ticket event ever, on the actual Western States course. Ultimately, it panned out about the way I thought it would. We had a few talented, tough, young bucks on the front that managed to hold on, some DNFs (20% of the field) and I was left cleaning up the carnage. That’s where I’m at on my ultrarunning journey.

Jimmy Elam, 31, and Brian Condon, 32 ran brilliant races and surely earned their entries into Western States this June. New York’s Tyler Wolfe, just 23, ran a truly gutsy race and managed to hold onto third. Ryan Kaiser, father of three, beat me (yet again) to the finish line of another golden ticket event, and brought it home for the masters. Kathryn Drew and Kim Magnus, both from Vancouver, BC, swept up the golden tickets for the ladies with their gritty performances.

At that glorious finish line, I was on Cloud 9. I was so encouraged by how strong I felt coming up from the river. It was one of those magical days, where I didn’t want the race to end and caught myself wondering if I could keep this magic flowing, like the American River itself, through the summer racing season. We shall see.

Reconnect with Your Roots

Congratulations, Bob! I always love hearing about your races.