I registered for the Bryce Canyon 100 as a training run. The entire course rests between 7,000-9,000 feet in elevation and has 14,000+ feet of gain and loss (which is respectable but not outrageous). My only concrete plan was to run hard. 150 runners shuﬄed in silence up the dark ATV trail leading into the canyon. We turned onto single track and began the first climb above 8,000 feet. This year, the course consisted of two 50-mile loops, but the first 25 miles are radically diﬀerent than the back 25.

At the end of the first loop, I double-checked that I was ready for a cold night alone. It would certainly drop below freezing in the early hours of the morning. I wasn’t leading, so a few extra minutes wouldn’t matter. I realized I had forgotten to pick up my headlamp at the previous aid station as planned since it was well before sunset, so I borrowed a cheap headlamp from a volunteer. I would hardly have to use it, if at all, before I got to my next drop bag in 18 miles.

I set out again and instantly felt sick on the first climb. Nausea pummeled my tender sides and settled to rot in the pit of my stomach at mile 55. At 8,500 feet, my heart hammered uncomfortably against my breastbone and my temples throbbed. I closed my eyes and felt them bulging against my eyelids in rhythm with my heartbeat. I tried to slow my footsteps, but I simultaneously wanted to push myself. I reasoned that the more I hurried, the sooner I could descend.

By the second climb I started coughing and gagging. I knew I had lost my stomach. I started thinking how pathetic it was, barely halfway through the race, to be nauseous and walking. You’ve done this before, you should know better. Look at you. Look how slow and miserable you are.

Red flag. I recognized that voice. That rude and blaming devil rears up when I don’t have enough calories. I smirked a little; I knew the problem and knew I could resolve it. Desperately I tried to sip on Tailwind and gulp a salt pill in hopes of balancing out, but my hands and belly were swollen and soft. Running turned to marching. 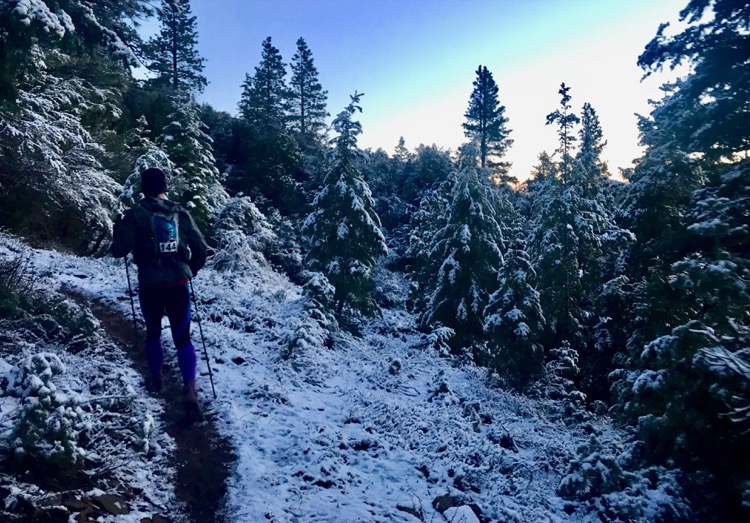 When I finally reached the aid station, none of the warm food was ready and my pack was still full of Tailwind (frozen potatoes and crusty sandwiches did not sound appetizing). I estimated that I had plenty of calories, hydration and electrolytes in my pack and I shouldn’t waste my time waiting – my second poor conclusion of the afternoon.

The sun sank behind the pines and I was alone in a meadow with the worst headlamp on earth. A beautiful white full moon illuminated the empty gravel stretching ahead. I tried to keep up with another runner and his pacer, but even light jogging sloshed my guts. They gave me two Tums and a heap of pity, and I watched their lights bounce oﬀ into the distant pines.

I looked up at the moon. You said you were looking forward to things getting hard so that you’d have to dig deep. Liar. You can’t do this. You’re not a 100-miler. The devil came back to walk with me. For 16 miles we walked together. I had no light and no company. I was 60 miles in and struggling badly. I couldn’t even run my training race well.

My dream to finish the Triple Crown of 200s was pathetic; no one as foolish and weak as me could ever do it. I told myself I would finish this stupid race and then quit; I’d confess to my friends that I was a fraud and I had no business being out here. I came to run hard. I drove 1,223 miles to race.

I had two equally discouraging choices: quit or hike 40 miles. I knew I would hike, but I did not want to. The big dipper glittered above me. Stupid stars. Stupid everything.

At the East Fork Aid Station, I was welcomed into a cheerful glowing tent filled with shaking, freezing people. “I need some help,” I told one of the volunteers. I needed to start eating and drinking again, and I needed to have water in my pack instead of Tailwind. Tommy looked me straight in the eye, nodded once, and disappeared with my pack. Suddenly I had a lap filled with quesadillas and soups and hand warmers. He dumped out my drop bag at my feet and told me to assess what I should pack and wear for the next leg. I felt childish asking for someone to help me fix my problems, but I also felt too sick to care, not unlike other times in life I’ve needed help. Tommy smiled reassuringly and said we all sit in that chair sometimes. I thanked him, put on my headlamp and pack, and headed back down the dirt road. 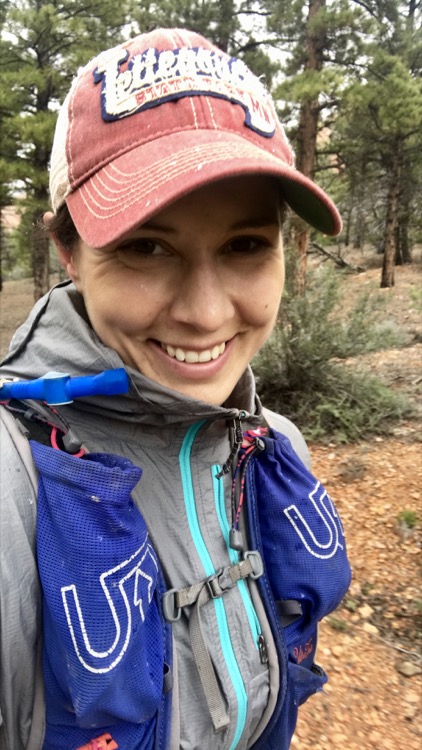 It still hurt to run my all-day pace, but I didn’t have the black swirling angrily inside. My body was starting to calm down and normalize just minutes out of the aid station. I looked at my watch—it was 10:30 p.m. My headlamp flickered and died. It was going to be a long road.

I was eager to get to the next aid station—not only because I needed a headlamp before I hit the single track again, but I knew my friend Barkley from the Moab 240 was captain. My excitement to see a good friend faded into a discouraging, endless climb. I made the final turn up to the tent, but I didn’t recognize anyone and disappointment piled on my shoulders. I walked toward the light of the fire and suddenly, Barkley was beside me. I hugged his waist and looked at my feet. “It got gritty,” I told him, “and my headlamp is dead.”

He put a hand on my shoulder and held me at arm’s length. “You’re the second place female,” he said in a gentle voice, “and first place female is asleep in that car.” He pointed.

“That’s impossible,” I shot back. I quickly fumbled to calculate the last 19 hours and how many people I’d passed and how often I’d been alone. I’d been shuﬄing and depressed. There was no way I could be in the lead.

He and Melissa gave me broth and a light. I was finally emerging from the low. I had never felt such a cloud like that during a race, especially for several hours. Typically, I laugh my head oﬀ and find too many interesting people to meet and swap stories with.

I was suddenly eager to leave, and felt bolstered and confident in a genuine way. I had been convincing myself that I was failing. Maybe I wasn’t.

Barkley walked out with me until the glow of the aid station had disappeared and the ponderosa pines stood over us. We saw two small yellow headlights bobbing behind us. “Go,” he encouraged. “Win this thing.” I grinned and ran oﬀ.

Red Canyon is a small, 5-mile lollipop-shaped oﬀshoot on the course. It’s steeply stacked with switchbacks and slow. When I returned from the loop, I asked the volunteers when the second place female had come through. She was less than an hour behind me. Third place was just over an hour. I chugged a slushy Red Bull and flew. 13 miles to the finish line. 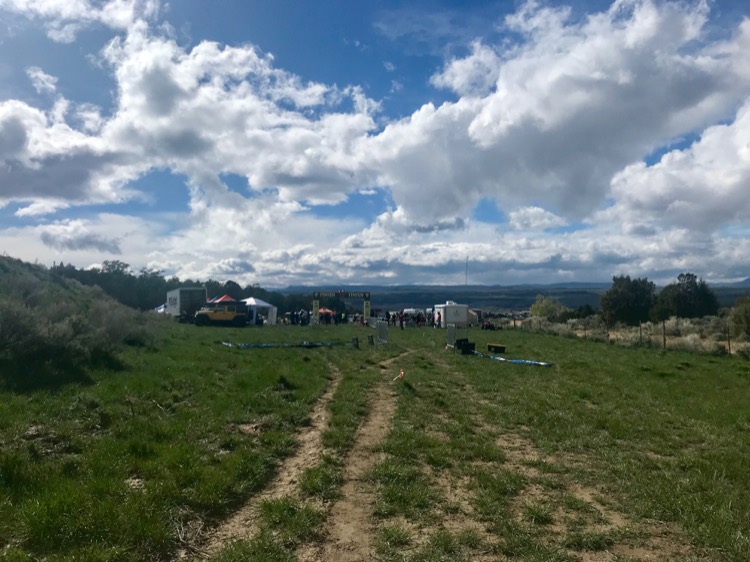 It was 8 a.m. and the half marathoners were running toward me. I wanted to shout, “How many runners are there?” I clawed my way up to 8,100 feet (breathing like I was drowning). The trail was flooded with people and I was so close to the end.

I butted into the main pack. Every single one cheered, congratulated, high-fived, patted my shoulder, stepped oﬀ the trail or told me I was amazing. A few women said they were proud of me. One man smiled and bowed dramatically. One took a photo of me. “You go, girl! First female! Rock this. You’re strong. You can do this.”

I started choking up. Tears pooled in the corners of my eyes. I am sure I was overly tired and probably starving, but that mile or two of constant encouragement is forever branded in my memory (I’m sure I grunted and half-nodded like a troll, but it settled deeply within me). All I had to do was get down, and I would be at the finish.

The final arrow pointing left directed me oﬀ the road, out of the canyon and into the green sunny field. The finish line was quiet and modestly welcoming. I did not mind. I saw my ending and I took it. Someone far away whistled, and just like that, it was over.