Laura Farrell has broken barriers in the sport of ultrarunning. Her real legacy, however, began with a vision she had in the mid-1980’s. Nearly 40 years later, she has dramatically impacted thousands of lives.

After moving to Vermont at age 27, Laura made a trip down to Virginia to compete in the Old Dominion 100-mile race on her mule, Tulip. At the time, runners and riders shared the trails on race day. “I said to myself, the next time I come back, I’m running.” She didn’t have experience running races and two years later, she was back at the starting line. Not only did she finish the run, but Laura won the women’s race. She remembers calling her mom after finishing and hearing her say, “You’re not going to do that anymore!”

Over the next several years, Laura’s passion for ultrarunning grew. “I remember saying to myself, my adventures and my travels are going to come through my competitions.” She laughed, recalling the gear and supplies she would use in her racing and training. “Power Bars back then were like sawdust,” and the running joke was that your arms would be more tired than your legs, having to carry water bottles and Gatorade before there were hydration vests.

By the mid-1980’s, Laura was staying busy with her running and riding competitions, as well as skiing. It was during a day of skiing at Mt. Ascutney when she had an idea. Laura was working as an instructor at the mountain and was teamed up with a family of five from New Jersey, none of whom had ever skied before. They had three daughters, and one was a nine-year old named Casey who had Down Syndrome. Laura spent the day with the family, going up and down the mountain, teaching all of them and sharing her love of skiing. The experience had a profound effect on her, tapping into her belief that everyone should have the opportunity to participate in an activity they loved. From this belief and vision, she founded Vermont Adaptive just a few years later. “I start things flying by the seat of my pants – the passion, energy and enthusiasm – and then I figure it out.” 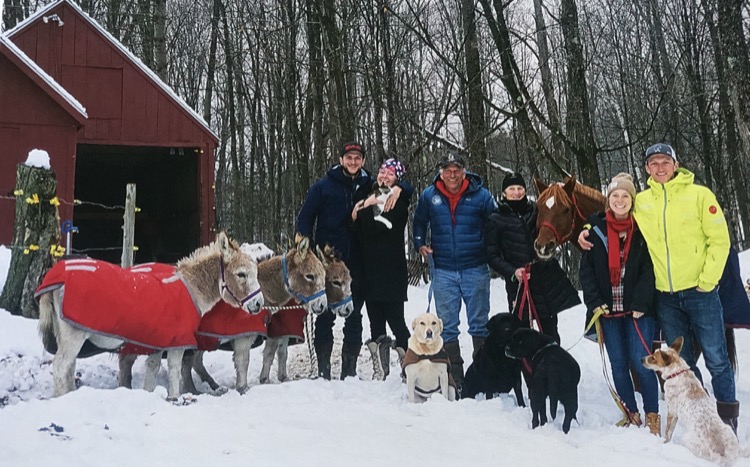 Laura and her family

Vermont Adaptive had an immediate impact, as they gave over 500 lessons that first year. At the time, there were no other adaptive programs in the Northeast. It also became a family affair. Laura met her husband, Jim, during the implementation of the program when she needed a ramp built for one of the buildings, and he was a contractor. Their two sons, Bobby and Brad, were born in the early years of Vermont Adaptive, “My kids lived at the program. For me, it was awesome to raise my kids in that environment.” Her mother-in-law, Pinky, even helped in the office with the kids, and learned how to use a computer. Laura’s vision was gaining momentum, and she turned her focus to researching fundraisers for the program. She got inspiration from a friend in town, Steve Rojek, who approached her with an idea. Steve had started the Vermont 100 endurance horse race a few years earlier and suggested that she start a 100-mile running race. 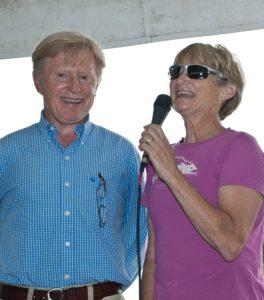 So, in the summer of 1989, 114 runners gathered at the starting line at Steve’s farm in South Woodstock, alongside the horses, for the inaugural Vermont 100 (VT100). They had 36 aid stations that year, reflecting Laura’s goal, “that it would provide an environment to encourage people to do something that they were passionate about.” She realized that not everyone had crews or pacers, and didn’t want that to be a barrier to entry. Now, 30 years later, the VT100 remains one of the top ultras of the year. It is one of just five races that comprise the Grand Slam of Ultrarunning, and is the only 100-mile race in the world where runners and horses share the trails on race day. This year’s race raised over $159,000 for Vermont Adaptive, and the event has stayed true to its hometown feel. “It was the perfect fundraiser for Vermont Adaptive because individuals are challenging themselves through an athletic endeavor.” 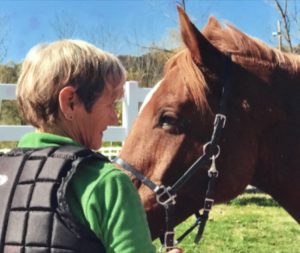 Laura and her horse Sven

Laura continues to burst with energy, working at the local elementary school in an after-school program, where she encourages kids to find their passion. Last summer, she completed the Vermont 100 on horseback, becoming one of only six women who have both ridden and run the event. And she has noticed a change, “I’m 67 years old and I can honestly say, this is the first year that my competitiveness is not there as much and my enjoyment level has risen.”

Anyone who is fortunate enough to know Laura will tell you that she shies away from the spotlight. It’s been 30 years since she founded Vermont Adaptive, and the program is thriving with over 400 volunteers and seven locations. Its mission statement remains constant: “Vermont Adaptive Ski & Sports is committed to empowering individuals with disabilities. We promote independence and further equality through access and instruction to sports and recreational activities.” Laura says, “It’s not me – it’s all of the volunteers, they’re the ones that do it. They’re the ones that make it happen and have kept it going. Maybe I had the idea, but that’s minor compared to what everyone else has done.” She is one hero that does not disappoint.