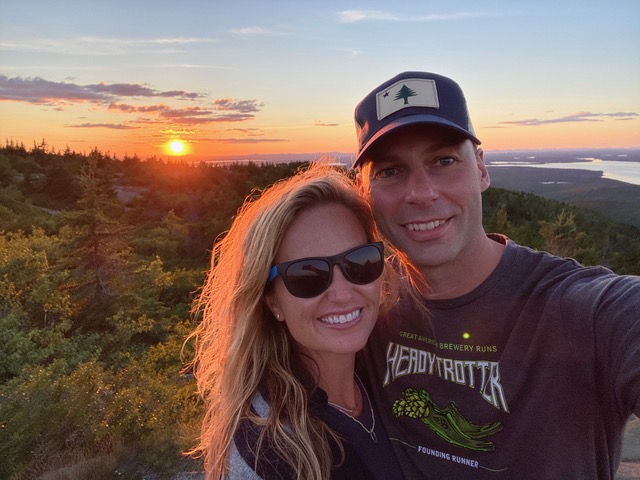 Jeff Beaudoin had been waiting 10 years for this moment. On a cool September day in 2020, gusty winds blew high in the White Mountains of New Hampshire as three headlamps dotted the landscape and Jeff and his buddies ran along the rugged and rocky trail of the Presidential (Presi) Traverse. The 20+ mile point-to-point run brings runners and hikers along numerous peaks, and summits the highest mountain in the northeastern United States: Mt. Washington. “There were moments of pain, exhaustion and self-doubt that were expected and normal, and we got through them all together as a team. The memories we created are ones that I’ll never forget.”

Jeff grew up in Biddeford, Maine, with his sister and parents. “We lived in a coastal town and would go to the beach in the summer and skate on ponds in the winter. What I remember most is the time spent together.” At the young age of two, Jeff strapped on hockey skates and was competitive by age four. “It was a great way to grow up because hockey taught me the benefits of being on a team, wanting to play a sport and traveling—lots and lots of traveling in the early hours of the morning.” 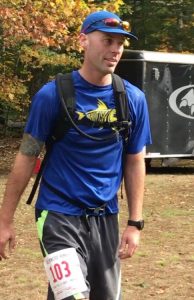 His first introduction to running was in eighth grade when Jeff joined the indoor track team. “I’d like to say it was because I wanted to become a better runner. The real reason was that a girl I liked joined and I wanted to spend more time with her. I was aware of how much I liked to run, but not yet aware of all the benefits, physically and mentally, the sport had to offer.” Those realizations would come later.

Running took a backseat to hockey throughout his youth, until he hung up his skates after his sophomore year of college. “After graduating, I went to watch my cousin Ben run a 10k, and I became hooked. The atmosphere of the race with all the cheering, smiling, and friendly faces was addictive. I then realized I could keep my interest in sports alive with running.” Standing on the sidelines that afternoon, an undeniable feeling was unleashed. “Ben motivated me to get my passion and drive back. Not so much to become better and more competitive against others, but to push myself past my limits.”

A few years later, a new goal was born thanks to his friends, Beau and Joe. He had listened to their stories about running ultras and joined them on a trip to Vermont. “I can’t thank them enough. We crewed for Beau at his first 100-miler, the Vermont 100. Seeing him cross the finish line was such an inspiration for me.” After that experience, Jeff decided that Vermont would be the place he would tackle his first 100-miler, so he signed up for the 2020 edition. Unfortunately, the pandemic had other plans. Going into 2021, he is laser-focused, with his calendar marked for the third Saturday in July. “This year I’m happy to be signed up again with Team Run 2 Empower, and I couldn’t be more excited to finish my first 100-miler.”

On that picturesque fall day, as Jeff and his friends moved along the Presi Traverse, he felt in the moment. “We soaked up all the views, traded stories, laughed, struggled and motivated each other every step of the way. Dan and I had been running ultras already and were accustomed to the mental and physical pain. Geoff was scheduled to run his first, a 50K, near his 50th birthday a month later. This traverse was going to be his longest and hardest run yet.” 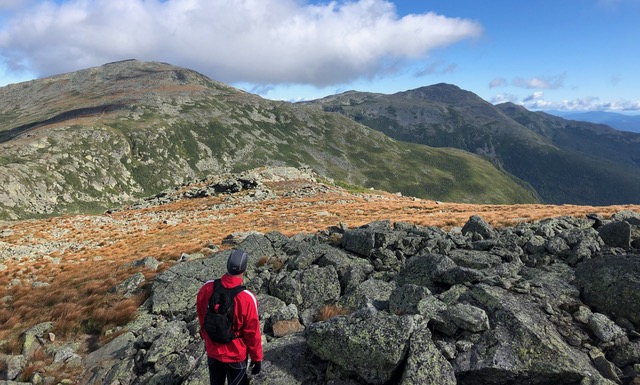 Jeff looking out on the Presidential Traverse. Photo: Geoff Simonds

On the drive home from the White Mountains, Jeff had a thought about how his love of the sport had come full circle. “I realized that Dan and I had paid our love of this sport forward to Geoff – just like Ben, Beau and Joe did for me a few years earlier. This sport is about constantly crossing finish lines and always searching for the next one. For me, paying the love of ultrarunning forward is one of those finish lines.”

Jeff’s household is a busy one. He’s a mechanical engineer at a local shipyard and a dad to his two kids. He shares household duties with his girlfriend, Emily, who also has two kids. Having balance and prioritizing are key. “For me, running is second only to family on my list of happiness. So, I make the time. I search for windows of opportunity in my day/week/month and dedicate myself to running during those times. No excuses.” When he’s not working, running or enjoying family, you can find him painting. “Just like a trail, when the canvas is blank you can start however you want on it. It’s your space to create whatever comes to mind. My whole family is very artistic and I’m starting to see that talent come out in my kids, which is very rewarding to me.”

Life is all about perspective, and Jeff has found much of his out on the trails or in the mountains. He recalled arecent memory, as he stood on a mountain summit looking out over the landscape below him. He remembered feeling very small. “Running has taught me that most of life’s problems aren’t as big as we perceive them to be. Ithink about how lucky I am to be here.”

Great story Jeff and love the photo of the two of you! Thanks for sharing and for passing on your love of ultrarunning.

Thank you for reading the article and your kind words!

Great story man. Very inspirational for me. Makes me to make that trek to ulta’s .

Thank you, Jeffrey and Aaron! Guy and Krista did an amazing job on this article. I’m glad you enjoyed it.

Thank you, Dave. It has been quite a journey and I feel lucky to have no end in sight.

Thank you for the support!