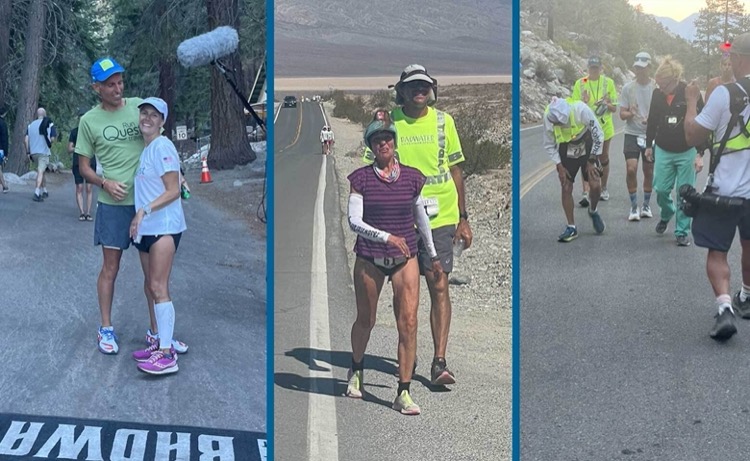 Badwater Basin in Death Valley, CA, sits at 280 feet below sea level. Each year in July, endurance athletes from all over the world converge to run 135 miles from the start at Badwater to the finish line at the portal of Mt. Whitney (elevation 8,360 feet). This year’s Badwater 135 consisted of 32 Badwater veterans and 62 rookies, and with three waves of starters between 8–11 p.m. Temperatures ranged from 118–102 degrees. Throughout the race, runners traverse three mountain ranges for a total of 14,600 feet of cumulative gain and face numerous other challenges, like scorching desert heat and sleep deprivation, over the course of two nights. Runners face a final challenge as they make their way up the last 12-mile climb along Portal Road in order to cross the finish line under 48 hours to earn their Badwater 135 buckle. 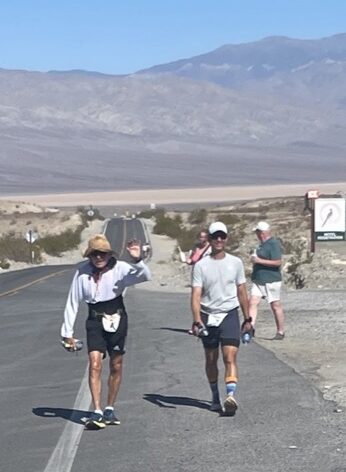 The race’s first cutoff is at 50.8 miles and runners Kelly O’Dell, 44, of Circleville, OH, and Bob Becker, 77, of Fort Lauderdale, FL, were among others battling to make the cutoff before they continued the climb up Towne Pass at mile 59. The course plummets downward as runners made their way to Panamint Springs at mile 72, with temperatures on the asphalt sizzling as racers arrived at the oasis in the desert which included bathrooms, restaurant, gas station and a medical team.

Harvey Lewis, the 2021 Badwater champion, held steady as the fourth-place male when arriving in Panamint Springs, where he gulped a large Coke before heading back on the course, determined to overtake third-place male, Lee Whitaker, 48, from Fort Mill, SC. In first place was 2019 Badwater winner and current record-holder, Yoshihiko Ishikawa, 34, of Japan. He was already approaching Father Crowley at mile 80, with second-place runner, Iván Penalba Lopez, 31, of Valencia, Spain, who was moving steady a few miles behind him. In third place was rookie Badwater runner Ashley Paulson, 40, of St. George, Utah.

In a race full of challenges, a lot can go wrong. The truly heroic feats are the ones we don’t always hear about—overcoming agonizing blisters, living through vomit sessions, sleepwalking spells and crew pep talks after a runner insists on dropping. Kelly O’Dell had advised her crew at various points along the course that she was done—and they agreed with her—only to incentivize her to keep moving when she was the last runner to check in at Darwin (mile 90). Crews are often the lifeline to encourage runners forward.

Then there are the heartbreaks and mishaps: one runner and their crew went the wrong direction coming out of Badwater Basin around the 16-mile mark and was eventually timed out. Caryn Lubetsky, 51, of Miami Shores, FL, experienced dreaded car issues and with 13 miles to go, her crew couldn’t get her support vehicle to start. They managed the best they could for the final stretch, accepting help from other crews. She persevered and finished in 37:30:46. Veteran Badwater finisher Ted Williamson, 64, of Lecanto, FL, ended his race around mile 90, due to back issues. 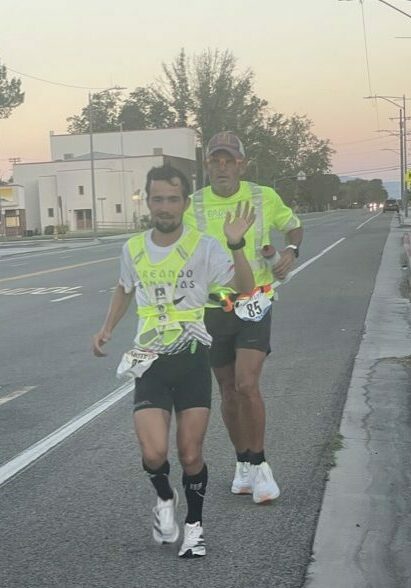 The top finishers gave memorable performances with Yoshihiko Ishikawa claiming his second Badwater victory in 23:08:20, Iván Penalba Lopez finishing in second in 24:02:57 and rookie Ashley Paulson rounding out third place overall and first female, and setting a new course record in 24:09:34. Second-place female finisher was Georgia Jo Manta of Athens, Greece in 28:45, and third-place female was Pam Smith of Salem, OR, in 30:11. Last year’s champion, Harvey Lewis, finished as third male and fourth overall in 27:16:35. However, the runner who stole our hearts this year was Bob Becker who was running his fifth Badwater with one goal in mind: to become the oldest finisher with the fastest time. Jack Denness of the UK set the record in 2010, finishing in just under 60 hours (the prior finish cutoff) at age 75. Becker was determined to best Denness by finishing in under 48 hours.

Becker is used to pushing limits. At age 70, he ran a Badwater double which consists of running Badwater 135, summiting Mount Whitney at 14,505 feet, and then turning around and covering another 146 miles back to the start at Badwater Basin. In 2019, at 74, he completed Brazil 135 and also covered 230 miles at A Race for the Ages in 73:45:13. He ended up winning the race and setting a new course record. 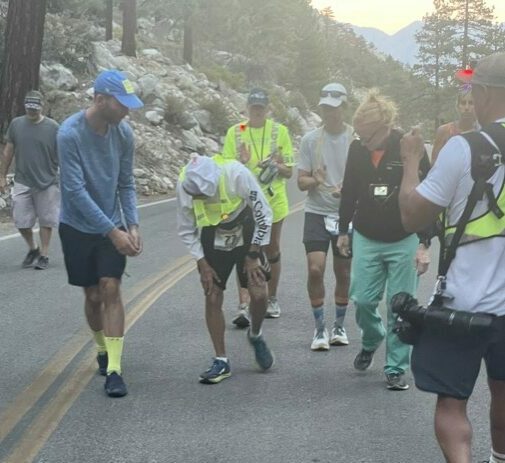 Becker has been determined to break Denness’s record for the last few years. His attempt in 2021 was cut short by an electrolyte imbalance that led him to miss the 50.8-mile cutoff. Determined not to repeat past mistakes, he had an airtight plan for 2022. While he made it past the first cutoff this year, his  journey was fraught with issues: at mile 72, Becker’s blistered feet were making forward motion difficult and at mile 122 he was already in full-on lean mode with his back muscles having given out. As he climbed Portal Road, he became so hunched over that, at times, his hands were touching the ground. His crew kept straightening him to relieve his posture. When he reached the final check point at mile 131, “everything in his body said no,” according to Becker. But he was bound and determined to carry on and cross the finish line. During the final mile, Becker had roughly 20 minutes to cross the finish line as he crept forward, sometimes on all fours, wrestling his strength to straighten and look ahead.

Runners cheered him on, including his devoted crew, Badwater veterans, race staff and 2022 race finishers encouraging him forward. “I couldn’t let everyone down,” Becker said. He fell over once and got up and pushed forward. One step at a time, Becker crept on, bringing many of us to tears as he slowly and surely reached the finish line in 48:17. While he was a few minutes short of his dream to officially break the record, Becker’s performance had a profound impact on those who witnessed his heart and grit.

It was a reminder that in a world when so many of us are just hanging on, watching another persevere to cross a finish line sometimes gives one the inspiration they need to keep going. “It was a reminder to me of the importance of inspiring others,” Becker said, “and that races are about so much more than our own personal goals.”