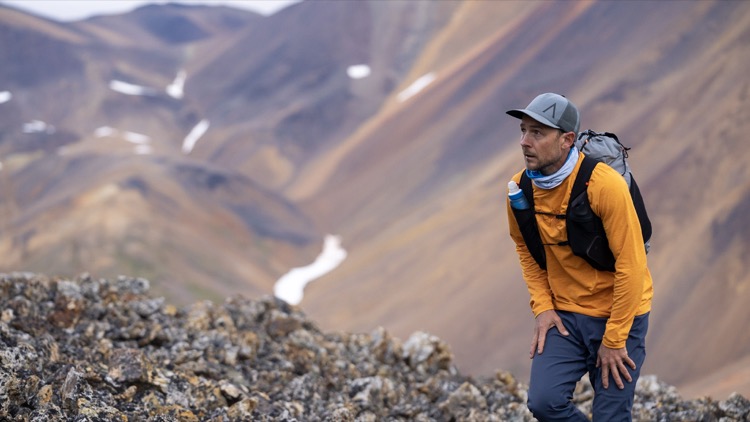 When on Vancouver Island in Canada, it’s not unheard of for Arc’teryx athlete Adam Campbell to get out for a short beach run followed by a mountain bike ride in lieu of an open water adventure that’s been scrapped due to ominous weather. In a previous, but not-so-long-ago life, this would have been tough for the endurance athlete to swallow.

“I was quite competitive and had a single-minded focus on performance in trail and mountain running and before that, triathlon, sometimes to the detriment of personal relationships, other passions and interests,” Campbell confided in a recent interview. Moving past that precision focus has allowed him the creativity to explore his love of nature in new ways. “It almost gave me permission to start doing those other activities. I’m really grateful for that.”

Winding back the clock to Campbell’s childhood and where he’s landed now, as one of the most dynamic mountain athletes in the world, it makes complete sense.

He grew up playing every sport under the sun on the west coast of Africa in Lagos, Nigeria. Afternoons were filled with endless beach time, sailing, surfing, soccer and tennis are activities he has fond memories of, and why sport became rooted in his DNA. “I was a super active kid, but I didn’t have a focus,” he recalled of his formative years. 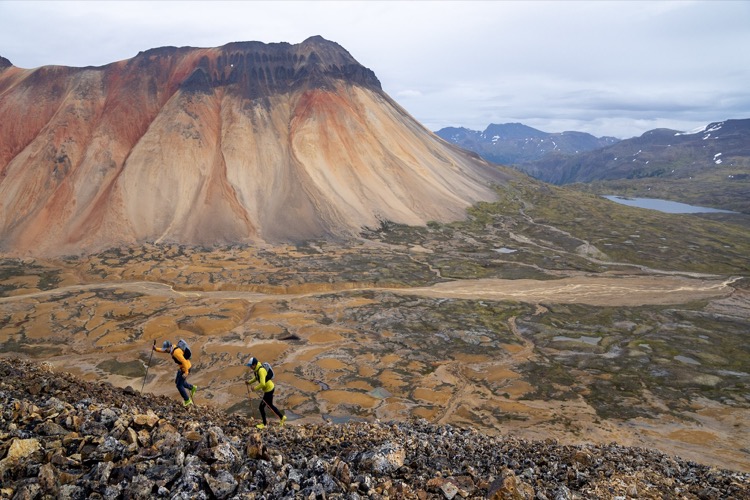 Then at age 17, he was whisked off to eastern Canada for boarding school where he added sports like rugby and alpine skiing to his ever-expanding repertoire. When he joined the cross-country skiing and running teams, he felt as if he’d finally found his calling. “I always liked training hard and really enjoyed running long distances when I was young.” With the first structured training of his life in high school, Campbell’s progression skyrocketed and his wide-ranging interests continued to expand further.

Even with no formal bike training, when he turned 19 in 1999, he jumped into the Junior Canadian Triathlon National Championships figuring his running and swimming skills would buoy him. They did just that, as he finished in the top five and qualified for the Junior National Team. At that race, he learned that Montreal would play host to the World Triathlon Championships later that year, so he dove headfirst into a new sport by purchasing a proper bike and finding a coach to prepare him.

While the race against the world’s best wasn’t a smashing success, Campbell did connect with Simon Whitfield, who would go on to win the Olympic gold medal in triathlon at the 2000 Sydney Games. Whitfield invited the clearly talented and impressionable young athlete to come out to Victoria, Canada, to train with him and others on the National Team. There was no hesitation; Campbell was on the next flight out west.

Over the next six years, he competed as a professional triathlete, learning from some of the best in the world and trying to make the Olympic team that would be headed to Athens in 2004 and Beijing in 2008. “I got this really deep dive into high performance sport and culture, and how to be a professional athlete. Multi-sport is where it all started,” he said. While he excelled in triathlon, it became clear toward the end of 2007 that he wasn’t going to make the team headed to China, and he was already looking for the next step in his athletic journey.

“When I quit triathlon, I remember seeing a photo of Scott Jurek running through a Redwood forest with a crop top, short shorts, a ponytail and his dog,” said Campbell. He continued, “I remember seeing it and thinking that what he was doing was so freeing. The training program I’d come from was so highly structured and super competitive. I loved that and I loved racing. But what he (Jurek) got to do is kind of what I was doing with triathlon, but on his own terms. I was ready for that.” 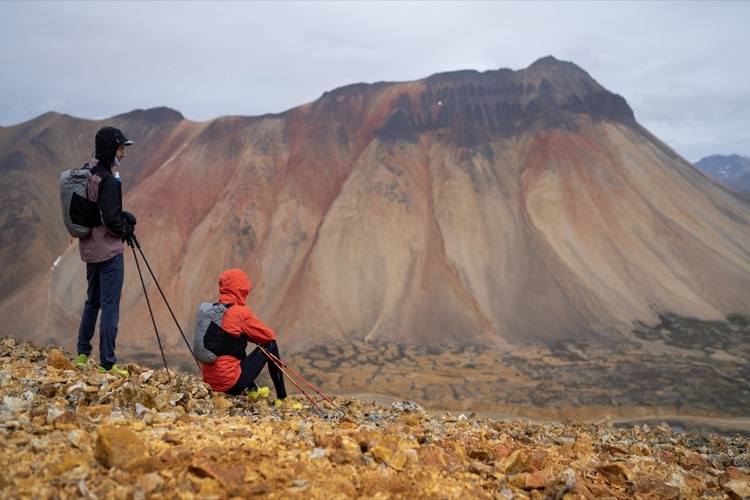 The call to the trails was clear. In no time, just as he had done with triathlon, Campbell jumped into the 5 Peaks trail race in British Columbia and qualified for the Canadian Mountain Running Team. He was slated to represent his country at the World Long Distance Mountain Running Championships at the Jungfrau Marathon in Interlaken, Switzerland. Without the slightest idea of how to prepare, he did what he knew best and went out on a limb to expand his expertise.

Campbell did his research on the best mountain runners in the world, and stumbled upon New Zealander Jonathan Wyatt, who he’d be competing against at the World Championships. He emailed him, provided some of his own background and asked for training tips. “He actually sent me a specific training program for the Jungfrau Marathon,” he recalled. “It was a pretty simple plan, but the kind of gesture that embodies the sport.” Wyatt went on to win that race and Campbell finished just outside the top 10, but he was instantly hooked on trail and ultrarunning.

First up on the ultrarunning docket was the classic Chuckanut 50k in Bellingham, Washington, the following spring. Geoff Roes took the title while Campbell and Kyle Skaggs dueled it out for second, with Campbell ultimately coming in third.

A few months later, he jumped into the White River 50. “I was feeling pretty good and ran off the front with Anton Krupicka and thinking, ‘This is really rad, we’re doing super well here.’” Campbell, being fairly fresh in the ultra world, went through the halfway point and recalled asking Anton, ‘How are we doing?’ Anton replied with something along the lines of, ‘Well, we’re both 40 minutes under the course record so I think we’re doing pretty well.’ Campbell’s knee started to scream due to the torrent pace and he ultimately dropped out, but Krupicka went on to win and set a new course record.

Determined to continue his competitive ascent in ultrarunning, Campbell did some strength and conditioning work in the off season, and came back and won Chuckanut in 2012. Two months later, he placed second at Ultra-Trail Mt. Fuji (UTMF), and got noticed by Salomon and a few other sponsors. He finished off his year with a fourth-place finish at the now defunct TNF 50 in San Francisco—a moment he considers a high point in his athletic career.

Campbell’s relationship with Arc’teryx started the following year, just about a decade ago, and coincided with his wandering interests. Having learned of the ski touring and alpine pursuits that many of his European friends pursued during the winter months, Campbell considered where he wanted to take his trail and ultrarunning. He was starting to get into slightly more technical terrain and craved adaptation in his skillset.

By linking up with a collection of world-class Arc’teryx athletes, he “got this really deep dive and mentorship with some of the best rock climbers in the world.” His runs turned more adventurous with scrambles and eventually, evolved into approach runs with technical alpine climbs. “Everything I was doing when I was rock climbing or ski touring, it was all really trail running influenced,” he emphasized. “It was more of covering terrain in the mountains as quickly and efficiently in as free a way as possible that was drawing me in.”

Lining up at mountainous races like UTMF and Hardrock made sense. He went on to podium at Hardrock in 2014, as his interest in the intersection of the mountain disciplines continued to blend, pushing the envelope in his training.

A terrifying, 300-foot alpine fall in August 2016 literally brought him back down to Earth. He broke his back, hip and ankle, and was in a wheelchair for three months, unsure if he’d ever run, let alone walk, again. Fortunately, he did both. He began walking the following December, and later that spring, started running. With a metal rod in his hip and enough scar tissue to last a lifetime, his movement was restricted, and he knew running would never feel the same.

Yet Campbell’s heart was still deeply invested in the sport. In July 2017 he went back to Hardrock, just 10 months after his fall. “If I’m being honest, even though it sort of got a lot of attention as an inspiring story, it was a mistake to go back to Hardrock that soon,” he admitted. “It did a lot of damage to my body and it also did a lot of damage to me emotionally. I was in so much physical and emotional pain during that race, it really set me back both physically and even more so psychologically. I just didn’t want to hurt that badly ever again.”

Once again, his athletic career was at a crossroads and he made the choice to fully accept what brought him into the endurance world nearly three decades ago: the multi-sport life.

As Campbell embraces the next chapter, he feels like he is developing a healthier relationship with all the sports that occupy his time. “It’s quite amazing that I can go a couple days without a run now. If it snows a lot, there’s no doubt about it. I’m going skiing. If the rock is dry, I’m going rock climbing,” he laughed. “It’s cool to have the options and technical competence in a variety of sports to be able to do what’s logical given where you’re at.”

Like a lot of things in life, Campbell has found his athletic pursuits to be incredibly cyclical. “It’s nice to be free from the performance side of sport and just once again be able to pursue interests and really explore seasons more deeply.”

While a beach run looks a bit different than that of the pick-up soccer games on the shores of his childhood home of Lagos, the sentiment in his approach of carving out meaning through sport has remained constant. “I’ve always really believed in following my passions and interests. When you stop being curious about what you’re doing, it’s probably time to move on.”