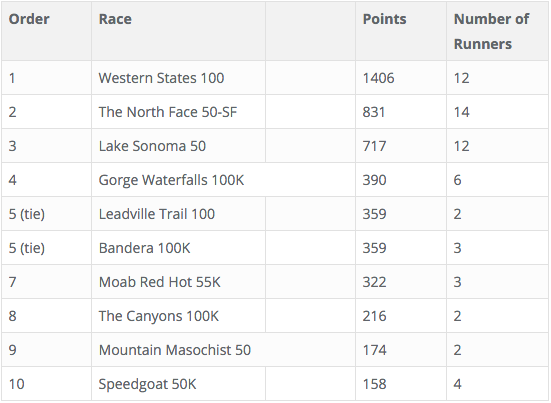 Each year a few races attract a large number of elite runners. In this analysis, we have examined the races in which those who received votes for Runner of the Year competed. Giving the runners of the year 40 points, the runners-up 39 points, and so on, we have devised a system for determining which races had the most competitive fields. (Note that this analysis does not include foreign runners who are not eligible for runner of the year.)

When you score, do you count athletes that DNF, like Rob Krar did in Lake Sonoma?

Canyons 100k does not appear to have been a competitive field for men, outside of the 1 man race at the front. I have similar doubts about the rest of the bottom half of these lists. Although lacking a single overwhelming star, JFK 50 and Cayuga Trails 50 had far more competitive fields overall.

I guess it seems to me that, given the small number of elite runners who get votes for UROY, this method will tend to favor races that get 1 or 2 big names over races that have true depth of competition. There are so many phenomenally fast runners who don’t get votes for UROY, often because they run only a small number of ultras per year or because they don’t travel to compete in the western races.